Referring to Vung Tau, people often think of beautiful, poetic beaches like a scene, but few people know that spiritual tourist spots are also a highlight to hold tourists when visiting this city. Typical of which is the Buddhist temple of Sakyamuni.

This work is the idea of ​​Mr. Le Quang Vinh – the governor of the French colonial period, but due to dissatisfaction with the regime, he resigned from the perspective of spiritual practice. The temple construction commencement ceremony was conducted on July 20, 1961 and inaugurated on March 10, 1963 after 19 months of construction. 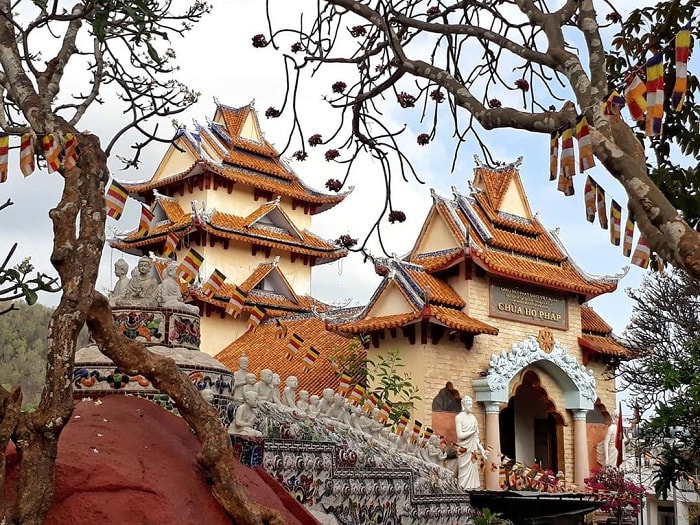 Initially, the pagoda was named Thien Lam Tu , but because it was sculpted according to the story of the life of Buddha Shakyamuni, it was changed to ” Shakyamuni Buddha “.

In 1989, this temple architectural cluster was ranked as a National Monument by the Ministry of Culture and Information and many years passed, it is still considered an attractive pilgrimage tourist destination of Vung Tau.

This is the first work that visitors see at Shakyamuni Buddha with 4 solid square pillars, mounted on top of 4 lotus flowers symbolizing the purity, purity and nobility of the Buddha.

In the middle of the gate is a large sign with the name of the pagoda in the national language, on the gate is placed a dharma symbol – the wheel of reincarnation in the Buddhist legal circle with 8 spokes symbolizing the Middle Way and 4 knobs. The outer ring represents the Four Noble Truths.

In addition, the gate of the temple is also decorated with sophisticated and sophisticated motifs and is paved with prominent colorful porcelain pieces such as yellow, blue, red … so it’s always eye-catching even when viewed from far.

This work is located right behind the gate of the Three Guan Gates, built in the middle of a 300-square-meter yard with a 17-meter-high octagon, to remember and commemorate the monk Le Quang Vinh – who has successfully founded Thich Ca Phat Dai pagoda. .

In addition, at the top of the tower is attached a stone lotus bud, inside there are 13 Buddha relics donated by Venerable Narada Maha Thera, and under 4 feet, there are 4 large peaks containing soil from 4 holy places of Buddha. The famous religion in India is the Forest Garden – billions – nuns – where he was born, Bodh Gaya – where he attained enlightenment, Deer Park – where he changed the wheel of dharma and the forest of Sala lived – where he passed into nirvana, so extremely sacred. 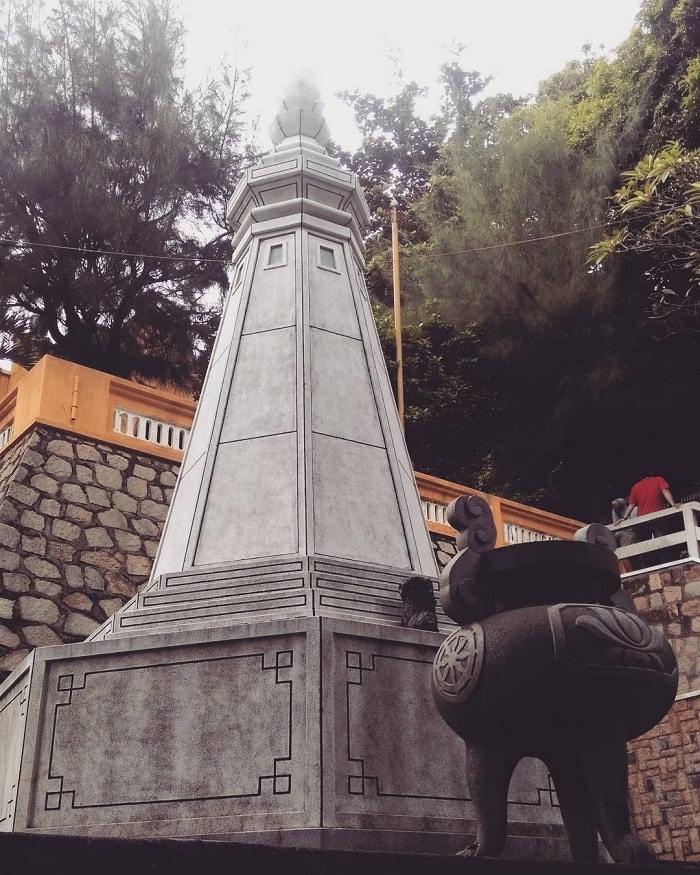 This is the most special area at the pagoda, located at an altitude of 25m, with many impressive sculptures such as:

Statue of Golden Body of the Patriarch Buddha : re-enacting the image of Buddha Shakyamuni meditating in front of Bodhi roots when cultivating and attaining enlightenment, this is also the most prominent work and becomes a common name for the whole architectural cluster – Shakyamuni Phat Dai .

In which, the 5.1m high Buddha statue was built in place in the Colombo style in the full lotus position, the hands were placed on the thighs in the posture of catching the Sphinx, the first part was casted in Saigon and attached. On a sunny day, it is like the halo of Buddha. As for the base of the statue, ie the lotus station, it is built 7m high, bearing an octagonal shape representing the eight main paths and is cast with solid reinforced concrete. 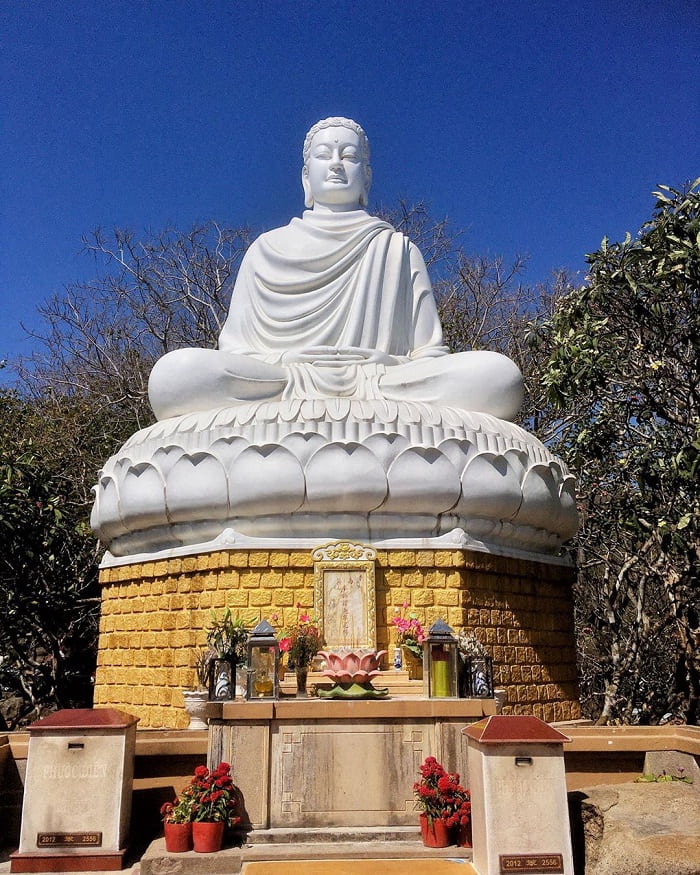 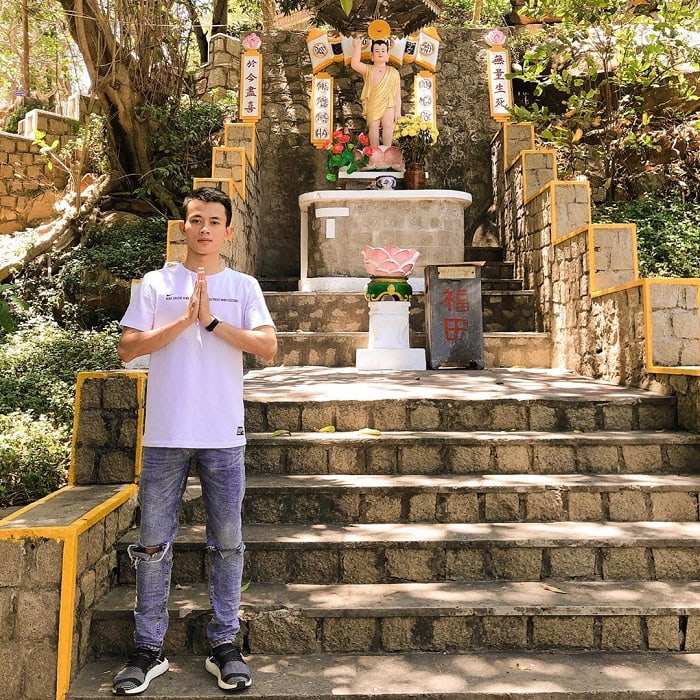 A little boy pointing to the sky (Photo @ im.se77en)

Buddha statue of enlightenment : 11.6m high, placed on a concrete pedestal of 6m long and inside holds 3 precious Buddha relics.

Loc Jia Garden (Deer Garden) : where the statue of Buddha Shakyamuni sits on a lotus, 1.2m high, 5 0.6m high masters sit around listening to the sermons and teachings of the Buddha carved in stone.

Elephants and monkeys offer flowers to the Buddha: images of animals inspired by the Buddha’s teachings should offer thanks.

Reclining Buddha statue: facing to the West, placed on a pedestal 4.2m high, Buddha body (width) 2.4m high, 12.2m long, below the statue there are 9 bhikkhus with respectfully clasped hands, through which the shows the image of the Buddha entering Nirvana and the surrounding disciples. How to move to Shakyamuni Buddha

Located quite close to the center of Vung Tau city, the road is wide, flat, easy to go, so you can completely come here by motorbike along Le Loi street and turn to Tran Phu, find the address 608 to come. place. If you depart from Vung Tau Front Beach , you will go along Tran Phu street, go through Da wharf, Dinh wharf and Dau beach to reach the temple.

Some notes when visiting Shakyamuni Buddha

– When entering the Thich Ca Phat Dai spiritual area, visitors need to pay attention to their costumes such as: dress should be neat, polite, do not wear colorful, flashy, revealing clothes, skirts have not reached the knee. , shorts or tank tops …

– As a pure place, visitors are not allowed to speak loudly, say vulgar words or laugh, affecting the atmosphere of the temple.

– During the Buddhist ceremony, you must take off your hat, mask, gloves …, while entering the house, you must remove your shoes.

– Do not take pictures arbitrarily without the permission of the temple.

– Do not burn too much gold, incense and banknotes because it will easily cause fire, explosion and environmental pollution.

If you are a follower of spirituality and love unique architectures, Thich Ca Phat Dai in Vung Tau is a destination that you cannot miss!