Although the Vietnamese ethnic community differs in language, geographic zoning, customs and practices, and economy … but still has the unity and quality of the Vietnamese people; At the same time, they love and stick closely together during the process of building and defending the country.

The concept of “ethnic minorities”

Vietnam is a unified nation with 54 ethnic groups. In which, there is no uniformity between the concept of “ethnic people” and “indigenous people”. In the territory of Vietnam, the majority of Kinh people (about 87% of the population); The government defines “ethnic minorities” as non-Kinh people (the Vietnamese people), this demonstrates the policy of “unity in diversity”, in which the Chinese (ethnic Han) have Many cultural features are similar to Vietnamese culture, contributing significantly to the country’s economic development, they are not included in the list of ethnic minorities in Vietnam .

Each ethnic group brings different cultural identities, expressed through economic and cultural activities of the ethnic groups. But in general, they all have a deep patriotism, industriousness, hard work, creativity in production, living in harmony with nature, the village and kindness, selflessness with those around them. Division of ethnic groups in Vietnam according to language

– The Viet – Muong group has 4 ethnic groups: Kinh, Muong, Tho, Chut. They live mainly on wet rice cultivation and fishing, and traditional handicrafts develop at a high level. Regarding the spiritual life, there is a custom of worshiping with ancestors.

The people of these language groups are good at cultivating maize, sticky rice, non-glutinous rice and vegetables, perching on the fields and terraced fields, and developing handicrafts such as forging, weaving, and knitting.

Traditional costumes of the Kinh people

Locations of all ethnic groups in Vietnam

– With a large percentage of the population, the Kinh people live in all territories but mainly in deltas, islands and in urban areas. The remainder of the Viet – Muong group such as Muong, Tho, Chut live in the midlands and mountainous areas of the provinces from Phu Tho to North Quang Binh. In which, the Muong mainly live in the hilly and mountainous areas west of the Red River and Ma River deltas, with the largest concentration in Hoa Binh and Thanh Hoa. The Tho live mainly in the south of Thanh Hoa, western Nghe An and the Chut live mainly in the northern part of Quang Binh and some communes southwest of Ha Tinh. 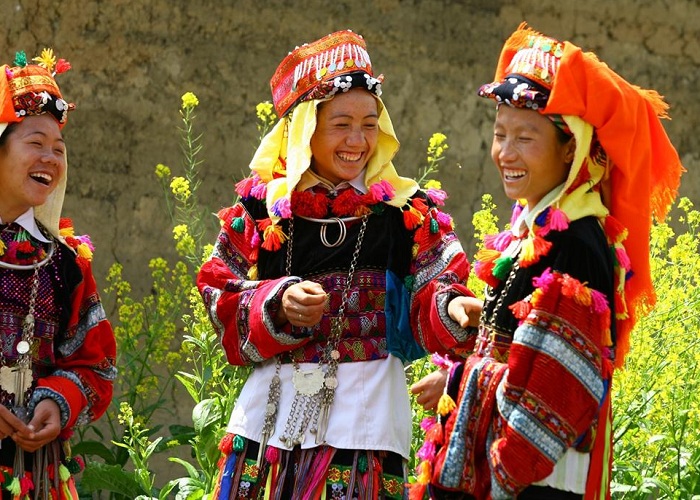 – The Tibeto linguistic group: The ethnic groups of these three groups reside in the provinces: Cao Bang, Lang Son, Thai Nguyen, Ha Giang, Tuyen Quang, Son La, Lao Cai, Lai Chau. Their villages are built on high mountain slopes or halfway up the mountain. Some ethnic groups such as La Chi, Cong, Si La and some Dao groups set up villages along rivers and streams. Depending on the land position, people build houses on stilts, houses on stilts, half-land houses.

– Mon Kho Me Group The people are scattered in the Northwest, Central – Central Highlands and Southern regions.

+ The ethnic groups speak languages ​​belonging to the northern linguistics of the South Asian linguistics family, including the Kho Mu (Kho Mu, O Du, Xinh Mun), Palaung (Khang), and Mang (Mang ), living mainly in the Northwest provinces (Son La, Dien Bien, Lai Chau and Yen Bai) and the westernmost region of Nghe An. They live alternately with the Thai, Hmong, Dao and other ethnicities.

+ Ethnic groups that speak the Katu languages ​​of the South Asian linguistic family such as Bru-Van Kieu, Co Tu, Ta Oi live in mountainous areas of Central Central provinces from Quang Binh to Quang Nam. South of the residence area of ​​the Viet-Muong group.

+ The southernmost branch of the South Asian linguistic family in Vietnam is the Khmer living in the South, located southwest of the Bahnar group.

– Chinese language group People reside in all three regions of the North, Central and South. Community activities in the Central Highlands

Some characteristics of the community of ethnic groups in Vietnam

National cohesion and national harmony in a united, democratic and equal community have become the Vietnamese tradition.

– Living in the same territory, sharing the same historical destiny, tradition, money and life dependent on wet rice agriculture; The ethnic communities have soon built up solid solidarity, always interested in helping and mutual support from the struggle against the invaders and overcoming natural disasters.

– The form of alternating residence between ethnic groups in Vietnam is increasing. Peoples do not have their own territories and economies.

– Due to the natural and social conditions and the consequences of oppressive and exploitative regimes in history, the level of economic and cultural development among ethnic groups remains different and different.

– Although ethnic minorities account for only 13% of the country’s population, they reside in areas with an important strategic position in politics, economy, national defense, security and international exchange that are in border areas. world, high mountains, islands.

– Along with the community culture, the unique identity of each ethnic group in the great family of Vietnamese ethnic groups has also developed strongly, contributing to enriching the culture of the nation. 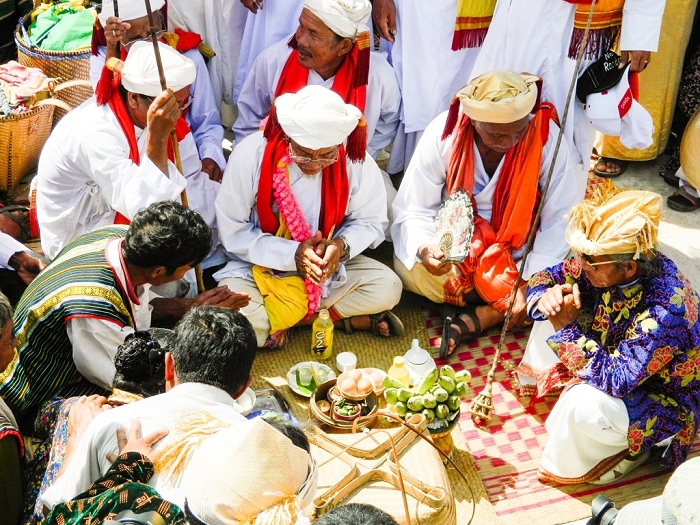 The unique Katê festival of the Cham people in Ninh Thuan. Photo: vnexpress

Note: Some ethnic minority communities have multiple names, and these names overlap. For example:

– Xa ethnic group is the common name for ethnic minorities in the Northwest, except for the Thai and Muong

– The Brila people can be: Gie Trieng or Xo Dang.

The community of ethnic groups in Vietnam today is due to a long history of formation and development. And Vietnamese culture is the synthesis of cultural values ​​of 54 ethnic groups in the same territory.