Cha Diep Church, also known as Tac Say Church in Bac Lieu, is associated with the resting place of Cha Truong Buu Diep. This is one of the most famous Catholic buildings in the Western region and many people are known for their devotion.

Where is Cha Diep Church located?

Cha Diep Church  , also known as Tac Say Church, is located on Bac Lieu street to Ca Mau and 37 kilometers from Bac Lieu city center. Many tourists still mistakenly believe that Tac Say Cathedral is  located in Ca Mau because it is only 20 kilometers from Ca Mau. Another reason for this widespread confusion is that there was a time when Ca Mau and Bac Lieu provinces were re-merged as Minh Hai provinces. And local people are still accustomed to calling them Ca Mau province together, so they think that the famous church is located in Ca Mau in this province. 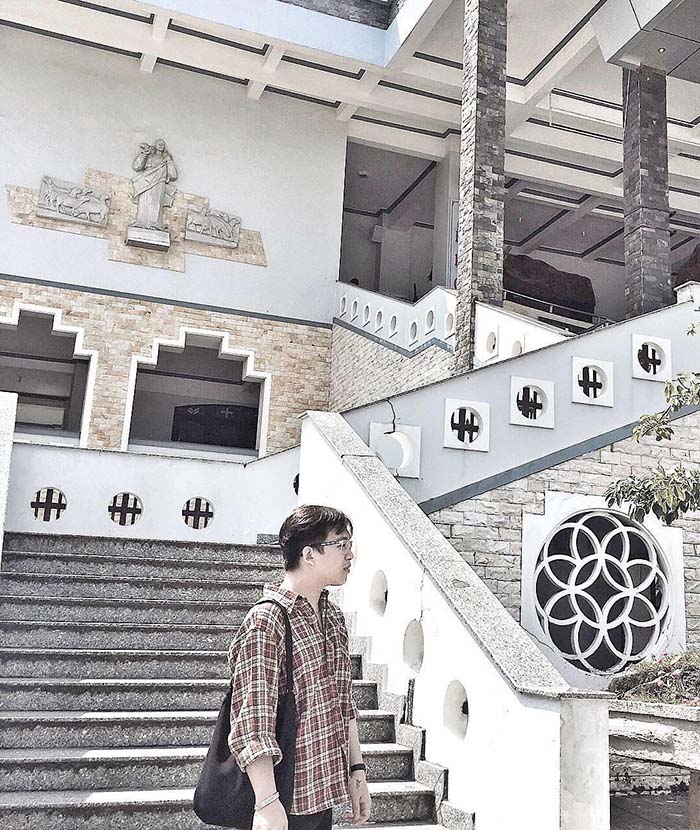 Currently, Cha Diep Church  is located in Ap 2, Tan Long commune, Gia Rai district, Bac Lieu province. Not only is a religious destination attracting hundreds of thousands of believers and visitors every year, this place is also a famous tourist destination in Bac Lieu . This work is also a place to worship Cha Truong Buu Diep – a priest who sacrificed his faith and many parishioners. He is considered to be the one who brings the blessing to the hearts of Catholics.

Guide the way to the church of Cha Diep Bac Lieu

Starting from the departure point is the capital Hanoi, you need to fly a long way to Ho Chi Minh City and then catch the car back to Ca Mau. You can refer to the information and fare of some of the following flights:

Vietnam Airline ticket booking: ticket price is about 3,000,000 VND depending on the time. 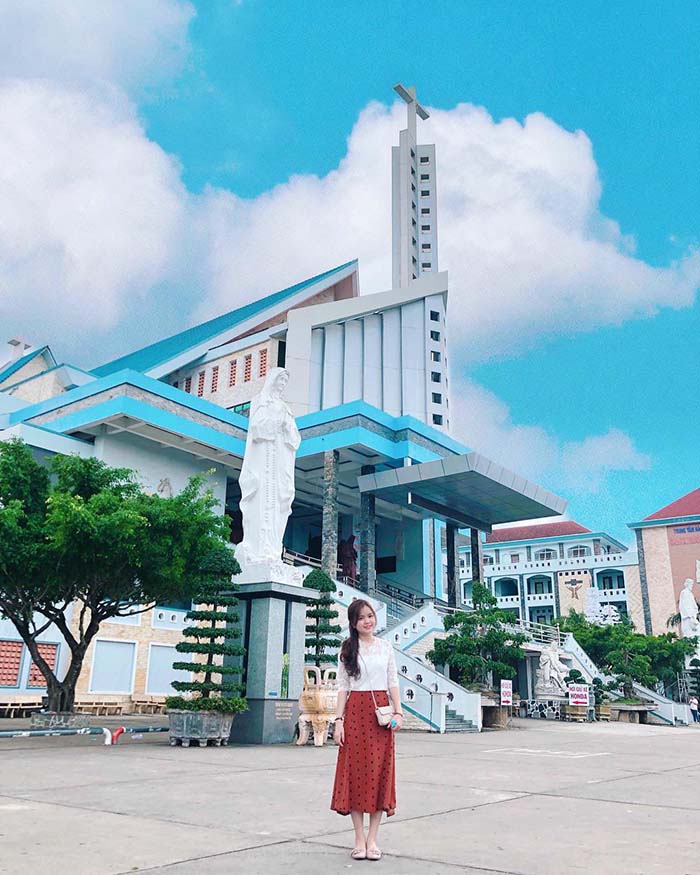 From Ho Chi Minh City to Bac Lieu or Ca Mau will take about 8 to 9 hours. Therefore, tourists should choose a bed car from reputable car manufacturers such as Mai Linh and Giap Diep for a convenient and comfortable journey. These car companies have affordable fares and flexible travel times so you can go and return during the day at your convenience. Especially for those who just want to go to Cha Diep Church  , they can easily notify the driver to stop at the church, convenient for entering and visiting during the day.

With a private car, the way to Tac Say Church is as follows:

– Option 1: Departing from Saigon, you go straight to NH1 along the road through the provinces of Can Tho, Soc Trang and then to Bac Lieu. After passing Bac Lieu city center, you continue to Hoa Binh town, 4km past Gia Rai town, you will meet Ho Phong bridge. You move over to Ho Chi Minh Bridge 2km and you arrive – meet Cha Diep Bac Lieu Church  on the left. 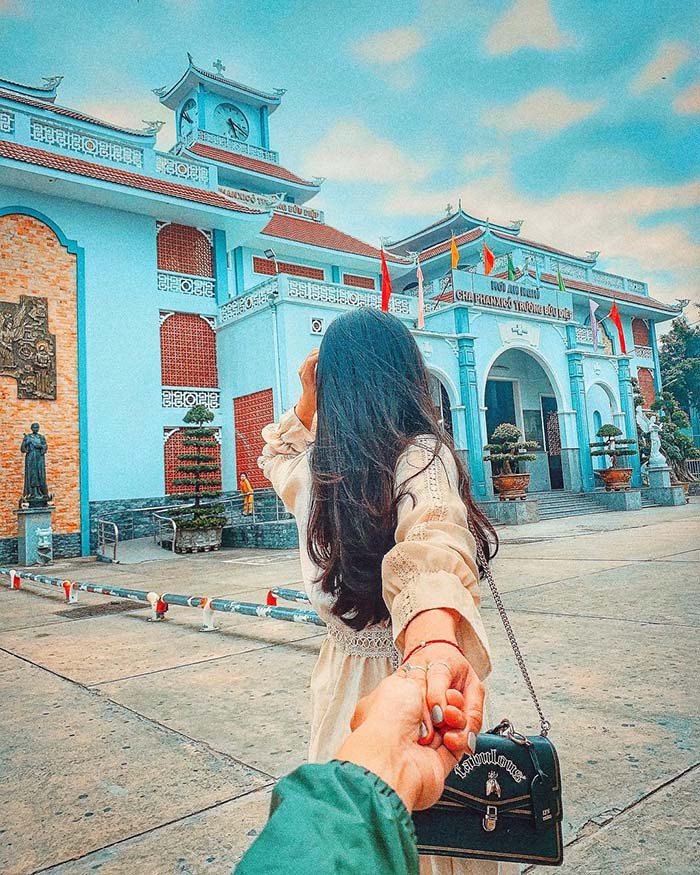 The church is considered the most beautiful in the West. Photo: @zoe_taaha

– Option 2: After crossing Can Tho bridge, continue until you reach intersection 7. After that, you remember to circle up the overpass and go to Phung Hiep highway to go down Ca Mau, then from Ca Mau around Tac Say again. This road is about 30km long.

When was the church of Cha Diep built?

Initially, Tac Say Church was considered a branch of the Bac Lieu family. Many elders told that in the past, this place was evangelized by Cha Jules DUCQUET – who was a French priest. Gradually after that, Cha established four religious families in the western region, including the surname Bac Lieu.

Until 1925, Tac Say church was officially established. And Cha Paul Tran Minh Kinh was the first parish priest of this most famous church in Bac Lieu. Cha Kinh was sent home in August 1926. In March 1930, Fr. Phanxico Truong Buu Diep returned to take the new position to replace Cha Kinh. During his time at the church, Cha Diep moved the entire main area from the inside to the facade as the current location. More specifically, Cha Diep is also a man who has made great contributions to the formation and development of Tac Say Church as of now. Over a long period of time, due to war and many events, the church has deteriorated and damaged a lot. But then it was rebuilt from the contribution of Catholics and became a spiritual tourist destination, the famous pilgrimage land of Bac Lieu, Ca Mau in particular and the West in general.

More and more stories of lay people and local people have been passed on about the church’s sacredness. Therefore, many people have come here to ask for grace and have been blessed with faith in Christianity and Cha Buu Diep. Gradually, people from all over the country and abroad came here to worship and pray, bringing their devotion to this sacred destination. The unique architecture of the Church of Cha Diep Bac Lieu

Overlooking from a distance, the Cha Diep Church  has outstanding architecture, demonstrating its majesty and stability. The location of the building is also very easy to see because it is located on the main traffic road which is quite busy in Bac Lieu province.

The work, also known as Cha Diep Church, has a rather unique and fancy architecture, including 3 main floors. In which the ground floor is the resting place, the 2nd and 3rd floor is the cathedral area for Mass offerings. Particularly, the lobby of the second floor is very spacious and airy. The building is designed as a large building with three roofs following Asian architecture. However, this religious work still retains the beauty of Vietnamese culture with the shape reminiscent of the old temple temples in the countryside of Vietnam with some more innovative details. 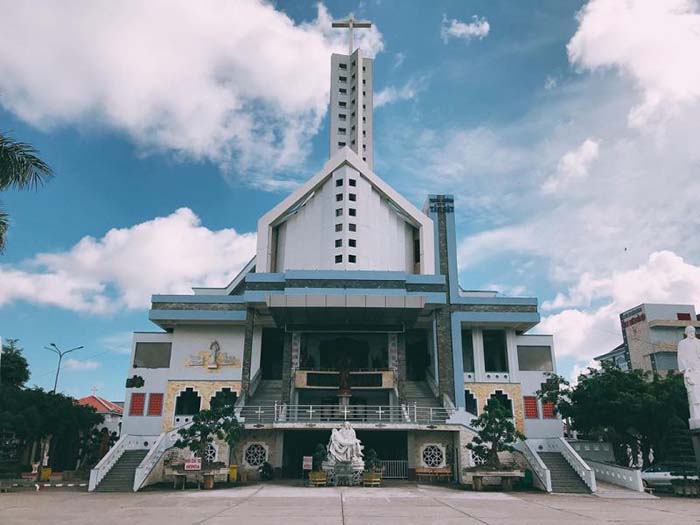 The building has quite unique architecture. Photo: vyctravel

The most special is the tomb of Cha Truong Buu Diep designed as a building with three roofs. The middle roof is the most impressive place and higher than the two sub-roofs, the top is fitted with a large clock to create a prominent highlight for the whole building. In addition, where Cha Diep’s grave is located, there is a wooden statue of Huu Thao 2.5m high and located at Cha Diep Church on December 24, 2008. Many other wooden statues are decorated in the spirit of Catholic beliefs and most are made of precious wood. The delicate wood touches and sculptures make this place more solemn and sacred. 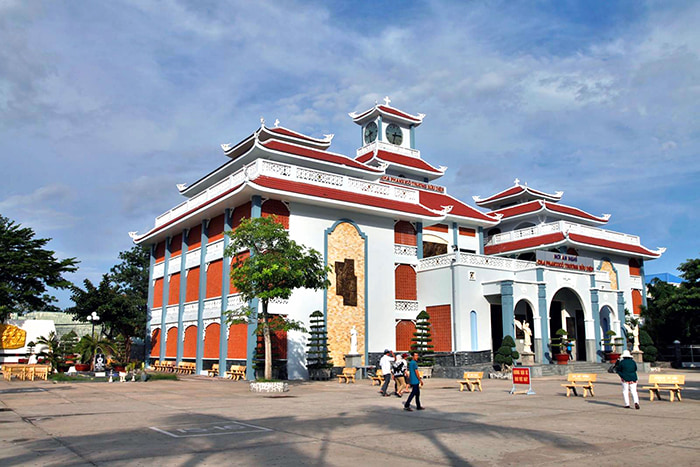 The story of Cha Diep and the church bearing his name

Cha Diep is the second person to accept office at Bac Lieu’s most famous church since 1930. His full name is Truong Buu Diep, born in 1897 in Cho Moi district, An Giang province. Cha Diep had a destitute childhood, losing his mother when he was just 7 years old. After a difficult time, Cha and his family moved to Battambang, Cambodia. He was officially ordained a priest at the Grand Seminary of Nam Vang in 1924. By 1930, after six years serving in many places, he was officially appointed to be parish priest at Tac Say Church of Bac Lieu . 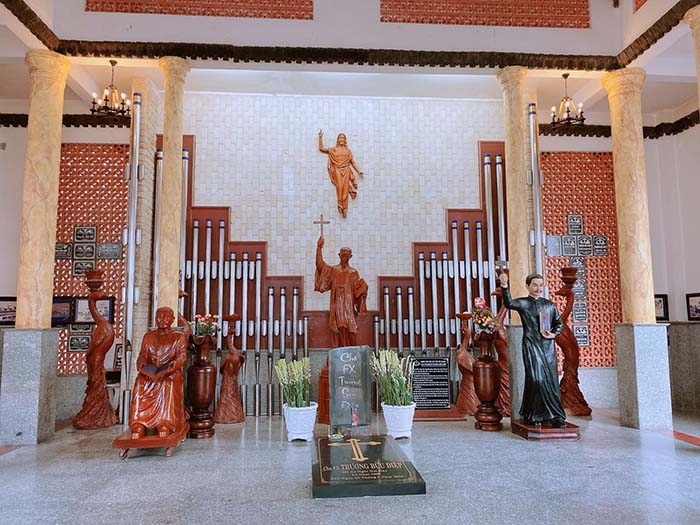 Cha Diep is a person who has great merit in the formation and development of Tac Say Church. Photo: thamhiemmekong

During his tenure here, Cha Diep was loved by many people because of his devotion and love for the laity. However, in the years 1945, the political situation was very complicated, so there were many big events. But Cha Diep did not evacuate but chose to stay in the church to accompany and take care of his parishioners. He went to pray and help the sick and sick. On March 12, 1946, Cha Diep was arrested along with 70 other parishioners and killed.

After Cha Diep’s death, the people of Bac Lieu took Cha’s body and buried him in Khuc Dia Church. Only in 1969, Cha Diep’s body was brought back to be buried at Tac Say Church’s campus.

Around the death of Cha Diep, there are many different anecdotes and stories, associated with Tac Say Church of Bac Lieu . But one thing in common is that they all speak of courage and wholeheartedness for the laity, even sacrificing their lives to protect others of Cha Diep. Today, when traveling to Bac Lieu and visiting Cha Diep Church, you will hear a lot about this kind-hearted and kind-hearted priest. In the church compound, there is a tomb containing the remains of Cha Truong Buu Diep. Photo: Vyctravel

According to the local elders, the area where Tac Say church was located in the past is a small shortcut passing by. At that time, this land also had many overgrown reeds. The people called it Tat Say, but because of the typical pronunciation of Western people, it turned the word “shortcut” into the word “Tac,” so that word it often called “Tac Say”.

If Saigon has an ancient 140-year-old Notre-Dame Cathedral, St. Joseph’s Cathedral is one of the most prominent sights of the capital, the ancient capital of Hue has the famous Phu Cam church , the West, specifically with For Bac Lieu people, Cha Diep Church  is the most sacred Catholic cathedral. This place attracts many Catholics and visitors to pilgrimage, worship, and pray. Since the 1990s, the church has never been free of pilgrims, especially on the anniversary of Cha Truong Buu Diep’s death every year, the influx of people from different places is constantly flocking. Especially the area where the tomb contains the remains of Cha Diep is the place that many people visit. Today, the tomb house has been restored more spaciously and spaciously. They also built a lot of rooms for visitors from far away to the church to ensure a well-received reception and accommodation for guests. 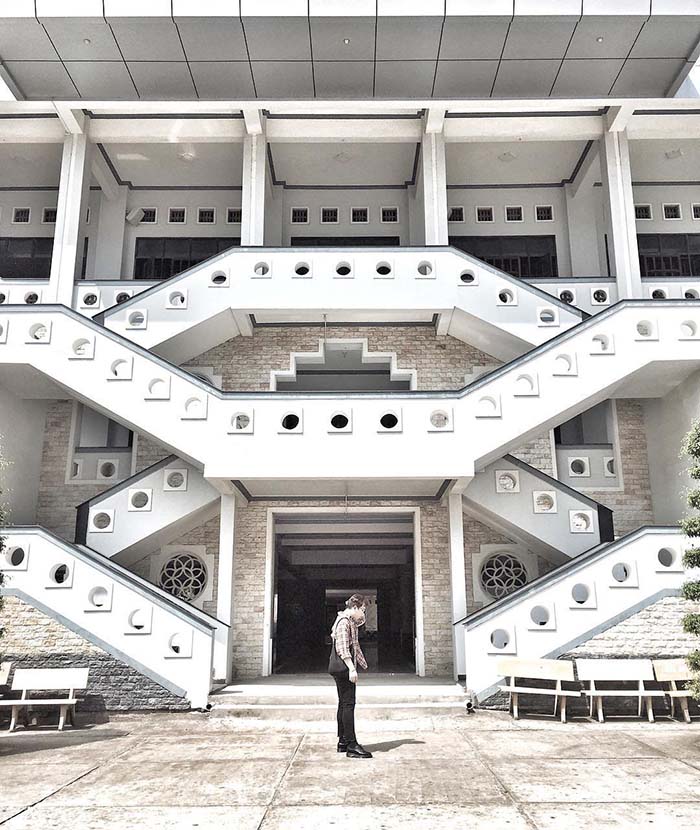 Cha Diep Church is currently a tourist destination, Bac Lieu beliefs, attracting many tourists to visit. It is quite surprising that up to 70% of the pilgrims here are not Catholics.

As a famous religious site, Catholics and visitors to Cha Diep Bac Lieu Church every year to sincerely pray for peace in life. When you come here, you will also be more calm, feel more at peace, especially when visiting Cha Diep’s grave, learn about the priest’s life wholeheartedly for the laity, more love for everyone. Do not forget to admire the beauty of the church which is considered the most beautiful in the West and keep beautiful photos here. 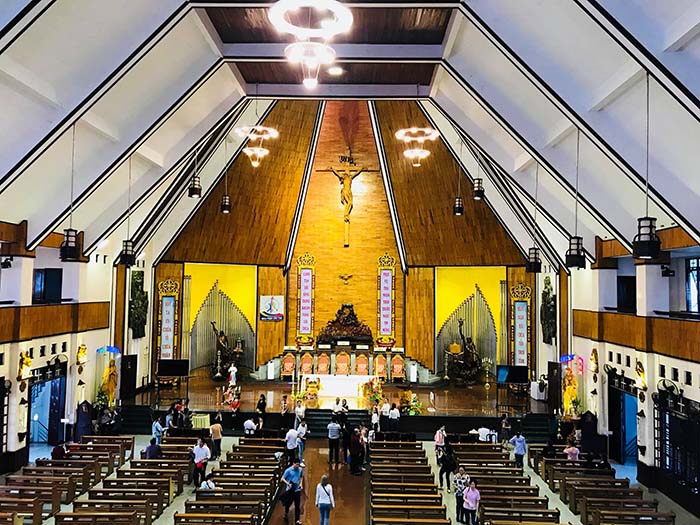 Inside the Cathedral. Photo: thamhiemmekong

Some information about the Church of Cha Diep

The program of official ceremony hours:

If you are planning a trip to Bac Lieu, do not forget to visit Tac Say Church to pray for peace and visit Cha Diep’s grave, to see the unique beauty of this famous Catholic work. This place promises to be an attractive attraction in your Western tour . Have a nice trip and remember to share those unforgettable moments with Compass Travel Vietnam!