The historic Kon Tum Prison is one of the witnesses to the hard work, the heroic and indomitable sacrifice of Kon Tum people in particular, and the Central Highlands in general to protect the national sovereignty.

The red land of the Central Highlands, full of sun and wind, is always an attractive destination for tourists coming here from all over to enjoy the picturesque natural sceneries, the scenic spots bearing the wild beauty of the mountains. ; the heroic historical sites of the nation. In particular, the Kon Tum Prison relic – where the glorious and heroic historical journey is marked with the heroic sacrifice of the people of the Central Highlands, stand up to defend national sovereignty. 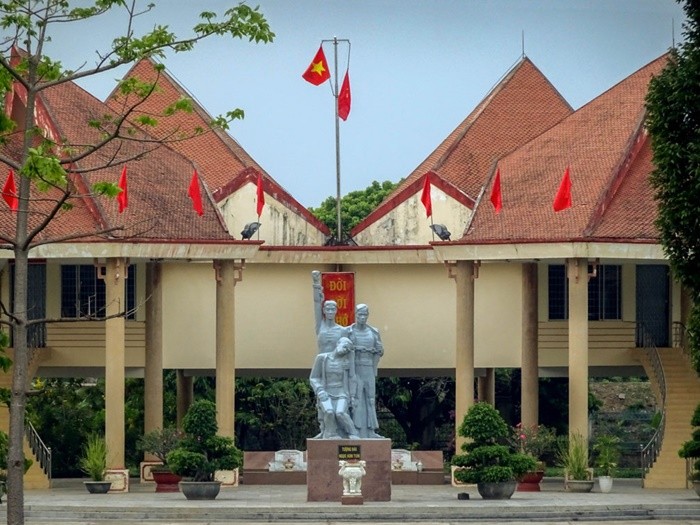 Where are the exiles in Kon Tum located?

Located on the North bank downstream of the Dak Bla River, where the stretch across the beautiful and poetic city of Kon Tum is the historical site of Kon Tum Prison and the provincial general museum. It is a prominent highlight to help visitors when walking on the natural road of Ho Chi Minh running from North and South, the winding central section will be easy to recognize. 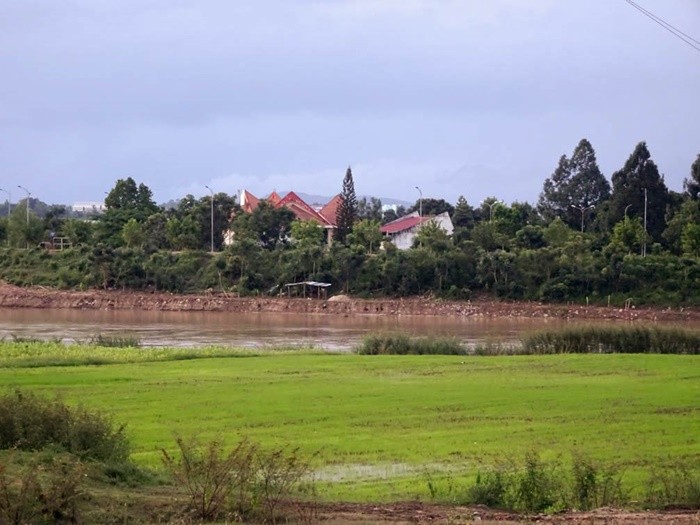 Located on the banks of the Dak Bla River

In Kon Tum’s history, two events “The struggle of blood” took place on December 12, 1931 and “The real struggle” from December 12-16, 1931 of the main prisoners. reigning in the exile of Kon Tum is the immortal anthem of patriotism and the strong spirit of the Vietnamese communist soldiers that terrified the enemy. And that is a mirror for generations to come.

Back in ancient history, the exiled house of Kon Tum (Lao Trong) was built by the French colonialists from 1905 to the end of 1917 to be completed. The prison in Kon Tum is built next to a large water ditch adjacent to the east-North prison, which is now Street 14 on Phan Dinh Phung Street – the axis of Ho Chi Minh road running through Kon Tum city; West – South is the green barn guard; The East-South is the porcelain building, the puppet management palace, the police station. They placed the exiled Kon Tum house in isolation for the purpose of easy control when designing a deep trench 150m long x 100m wide. In addition, they designed 4 more rows of houses in a square box with an area of ​​up to 2.5 hectares. At the four corners of the prison, there will be 4 floating blocks, which are extremely carefully guarded at night. The prison was designed in the style of the French-style Vauban fortress in the 17th century. The new prison was roofed with tile, the walls were made of lime-washed tops, four sides had no wall to cover it like other prison cells, but 4 horizontal houses built adjacent to each other into a square, each 18m side will have 1 door and 2 high huts for guards to easily observe inside to the outside. In the middle of the design is a narrow garden with a width of a row of 3.5m.

In 1930, the revolutionary movement in the Middle period took place with excitement. At that time, the envoy in Kon Tum as Jerusalem took the opportunity to complete the road 14, and would like to send the politicians up and then set up a prison in Kon Tum – that is the historic Prison in Kon Tum ( Tuberculosis outside).

Kon Tum Prison was classified as a National Historic Site in 1988. The prison contains brutal evidence with traces of a war of pain, loss, sacrifice but very fierce , heroic of the Vietnamese people on the path of national liberation and unification. 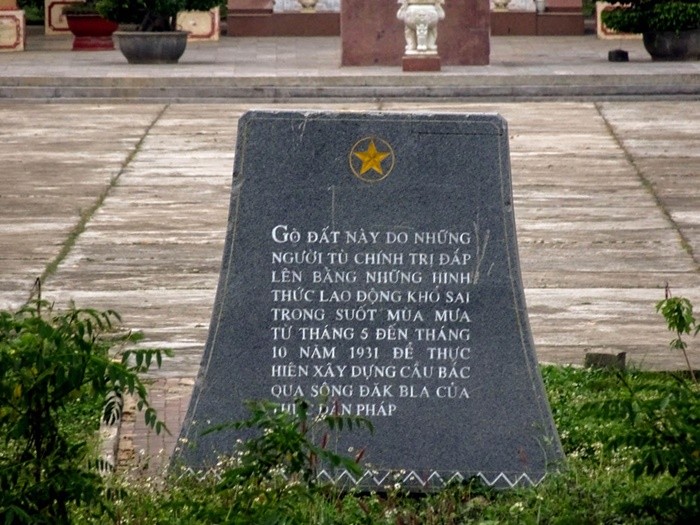 The exile house in Kon Tum was designed with 2 cells; 1 large house; 1 small house. In the middle of the house was a guard house, the side of the house was made entirely of iron: quotes, trusses, columns, beams … the roof was covered with iron, so it was called the Lao zinc or Iron Lao. The walls of the house are all flat, the bamboo is crushed with thick, interlocking barbed wire. In the back of the designer, there was a narrow entrance, a door made of jagged barbed wire, and a guard hut in front of the door. 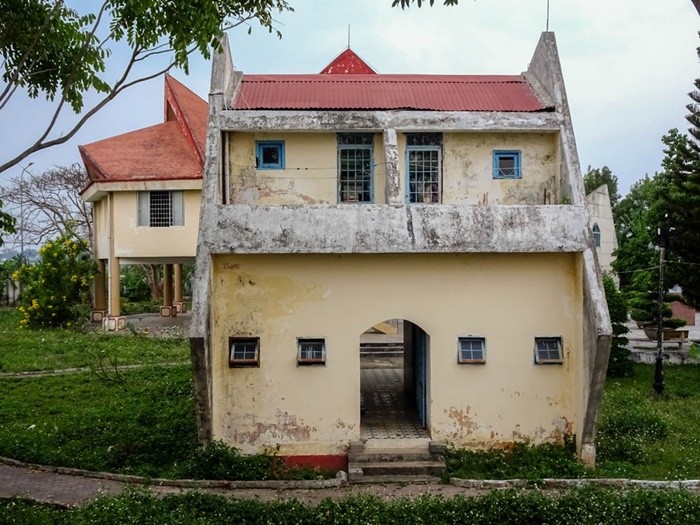 Kon Tum big house has the length of 18 – 20m; width from 12 – 14m. They said that the enemy took some car-repairing column for the house and brought it to be a prison. In the heart of the designer, there are 4 large stalls, 2 rows of prisoners will lie on each other’s head, one stall is about 2m from the other, at the end of the stall are 4 rows of standing shackles. This prison can hold more than 100 prisoners. The second house, which is smaller, can hold 60 people. This house is both a working prison and a prison for paralyzed sick people.

Kon Tum soldiers are simply designed to be easily watched by the guardians. The highlight of this exile is that the four surrounding areas are not built to keep as other prisons. It is lying bare on the river, sandy beach, no high watchtower, no lake, cooking stove, toilet, no lights at night … Simple but quite beneficial because of 4 surfaces It was empty, there was no hiding place, and if the prisoner did anything, the guards immediately discovered it.

What is the significance of the Kon Tum Prison site?

The prison historic site in Kon Tum has a lot of great significance to the people of the Central Highlands. Because this is a courtesy monument symbolizing the patriotism of the people of the South. Visiting this prison relic, visitors not only have more historical knowledge but also better understand the difficult years of the Central Highlands people in particular and the Vietnamese people in general. From there, we will be more proud and happy before the brave hearts and heroes of the heroes who have gone ahead and continue to build a more prosperous and civilized country. 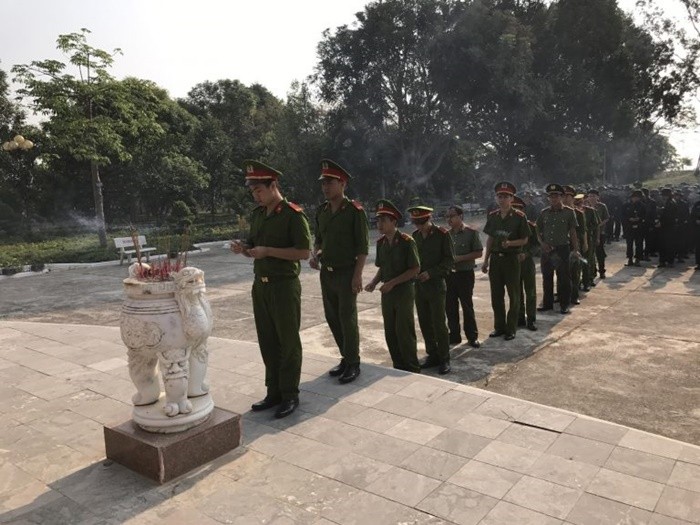 Burn incense to commemorate the heroic soldiers who died

If you have the opportunity to travel to Kon Tum or the Central Highlands provinces, please take a moment to visit the historic Kon Tum Prison to light incense to commemorate the great merits of heroes and soldiers. sacrificed heroically to protect the national sovereignty of Vietnam.