Nhan Tower located in the heart of Tuy Hoa city – Phu Yen is the place of worshiping the Cham spirit according to the Cham people; The work is a highlight of architecture and art and has received increasing attention from many domestic and foreign tourists.

“Phu Yen has the top of Cu Mong

There is Nhan tower, Ba river ”

The Nhan Tower of Phu Yen is located on the northern bank of Da Rang River, ward 1, Tuy Hoa city, is a famous Cham architectural work and hides many unresolved mysteries. The tower dates back to the late X and early XII centuries. The architecture of the Nhan Tower consists of three parts according to the conception of the Cham people: mundane, spiritual and divine.

There is an old tale that the origin of the tower is tied to the story of the goddess Thien YA Na. She came to the ceiling to teach people living in this land from plowing, weaving, spinning … to find ways to make a living. After the fairy returned to the fairy realm, to commemorate her merits, the Champa people built the tower to worship.

The reason for the project is called “Nhan Tower” because there are so many terns flying here to live and make their nests, so the tower also bears the name of this bird. 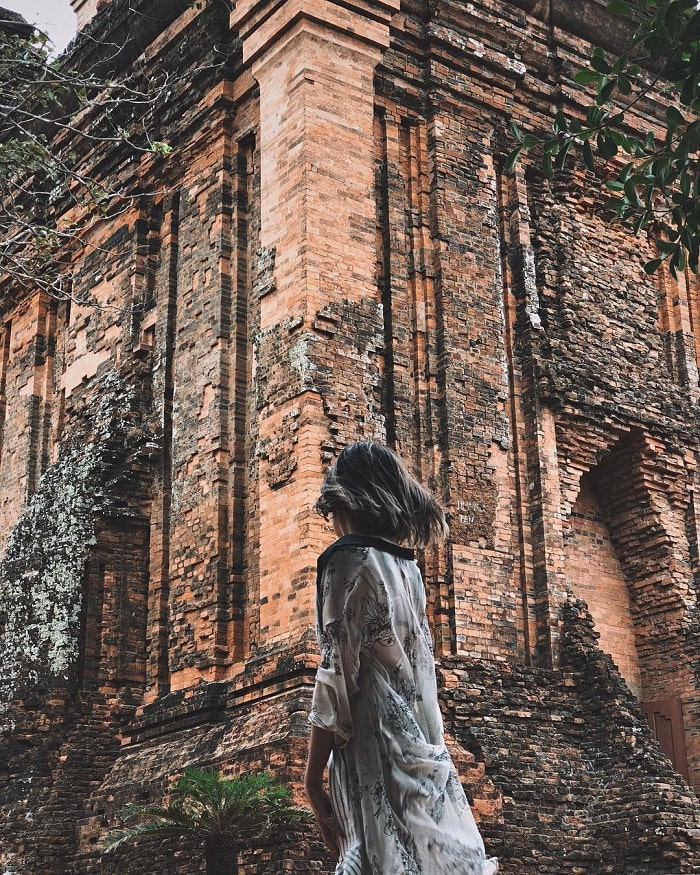 Not only a place, but Nhan Tower also has historical significance. Photo: @imsodaan

Nhan Tower is not only a famous architectural works of art but also has historical value. During the war, shells caused the top of the tower and 3 corners of the tower to fall; After that, it was renovated and restored relatively complete as today.

The entire area of ​​Nhan Tower Phu Yen is neatly planned in a square-tiled area of ​​about 1000 square meters. 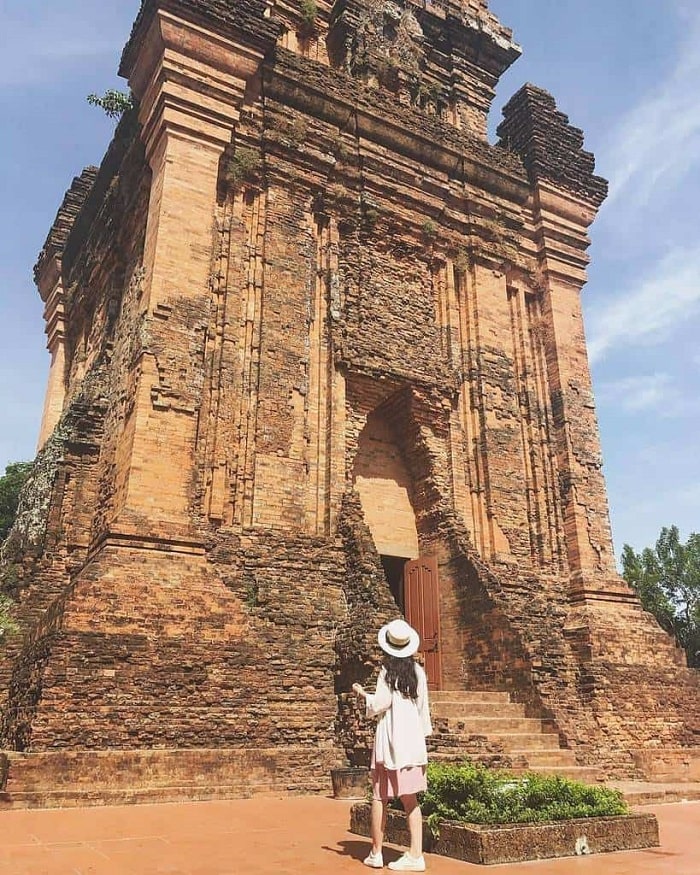 In front of the entrance. Photo: @ oanhtk42

At night, the light from the base of the tower shines clearly on the tower, illuminating a whole corner of the sky, so the tower is more sparkling. The tower has a quadrilateral shape with 4 floors, about 25m high with a square base of sandstone, the body of the tower is built up at the base and gradually shrinks towards the top with brilliant reddish brown color.

The top of the tower consists of many layers, the highest is a Linga stone statue with elaborate earth sculpture. Linga is a spiritual symbol of the Champa people; In each Cham temple and tower works, there are Linga and Yoni symbolizing the traditional beliefs of prosperity and hope for all things to flourish. 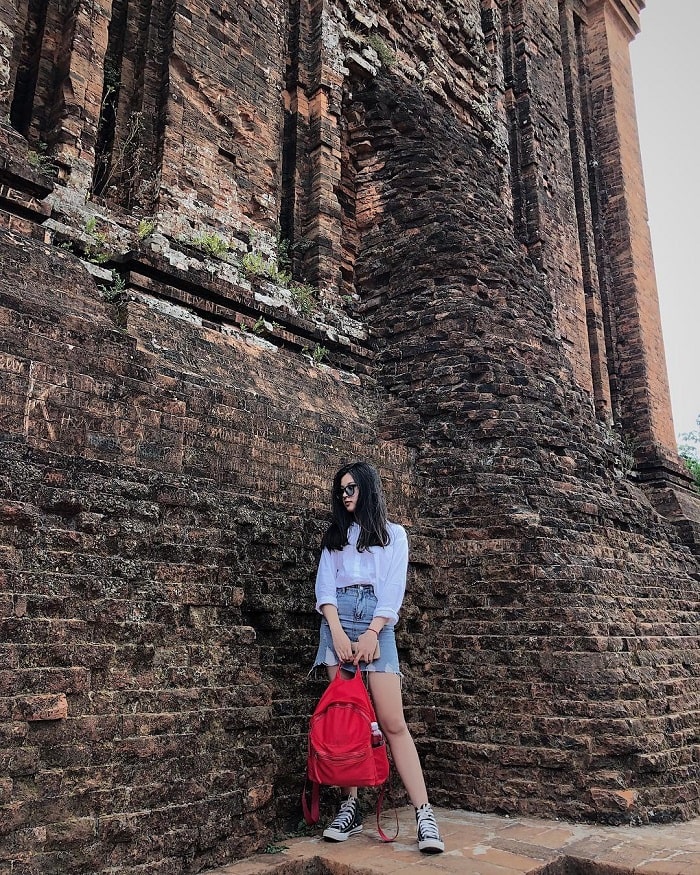 The bottom of the tower. Photo: @ tth.truc

Building materials are made of bricks and are closely connected; According to research, this type of brick has about 1.3 times lighter weight than an ordinary brick, but surprisingly has a high compressive strength, impact resistance than ordinary bricks.

There is no vein between the bricks because they are held together by the glue made from natural materials that until now, how these materials are mixed together to achieve durability until today Currently, there is no answer. Most tourists like to visit  Nhan Tower because from here you can see the whole city. Tuy Hoa includes sea, river, copper, mountain … In addition, going deep inside, instead of the altar, there is only a small pot to make incense sticks for Supreme Lord Thiet A Na Dien Ngoc Phi to be built. from the Late Le dynasty. Around the wall, there are dragon-shaped patterns delicately carved on marble placed in the four corners of the tower. Do not look to the top of the tower from the inside, you will see a deep, soaring mysterious space. The tower is about 25m2 wide, three walls have decorative patterns associated with ancient religious concepts and creating fake doors. 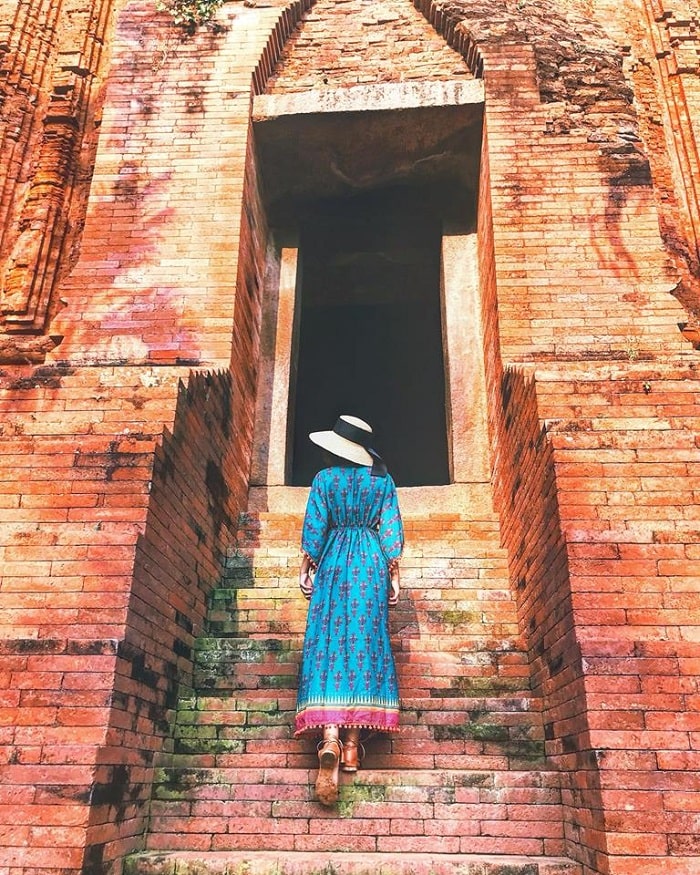 A virtual living place that is most popular in Tuy Hoa. Photo: Internet

Not only a tourist attraction, Nhan Tower is also a place where entertainment activities take place on the occasion of Tet, the 1st and 15th of each month attract people. Especially on the full moon occasion of the first lunar month, Nguyen Tieu poetry night is held here, gathering writers and artists from near and far to exchange art.

Nhan Tower Phu Yen was honored in the Top 10 towers and groups of ancient towers most visited by tourists, along with famous towers and towers such as: Cham tower cluster in Ninh Thuan, Cham tower complex in My Son holy site ( Quang Nam) , Duong Long tower (Binh Dinh) …

During your trip to Phu Yen, do not miss the opportunity to visit Nhan Phu Yen tower to see Tuy Hoa from above at dawn or sunset, as well as learn the mysteries in the way of building construction. ancient Cham architecture for those who are interested. Or on a certain holiday, coming here, you and the indigenous people are immersed in a unique sa Huynh culture that is nothing more memorable./.