The Dragon Carp Da Nang is an architectural symbol of the people of Da Thanh. Even at any time of the year, this project still shines brightly by the unique beauty of the romantic Han River. Regardless of whether the local people or tourists pass by, they must compress a little to admire, check-in.

The Dragon Carp is located on the east bank of the Han River, between the Dragon Bridge and the Han River Bridge in Da Nang. Visitors just need to move along Tran Hung Dao Street to the Love Bridge to see this statue at the foot of the very prominent bridge. 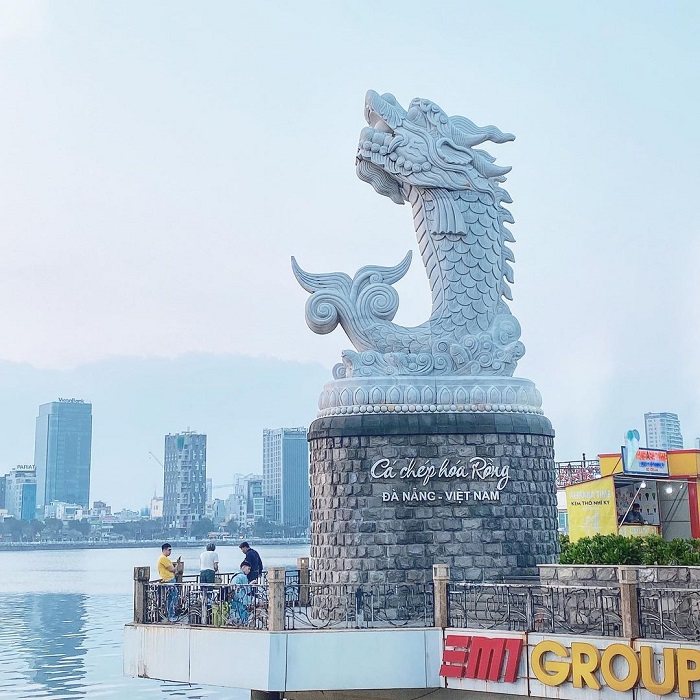 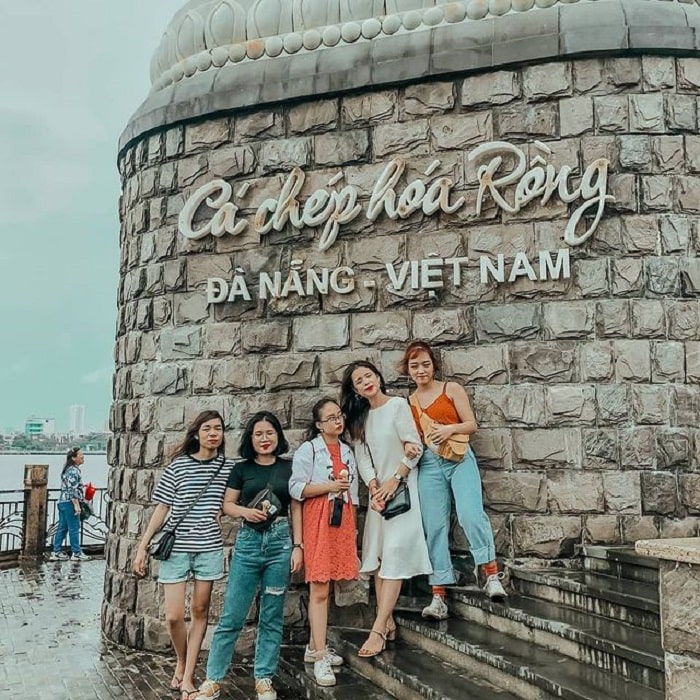 In terms of feng-shui, the statue is located in the city center, converging the following elements: Chan, Ly, Can, Khone, Mosaic, Can, Ton, and Doai. This is a work that has great faith in a prosperous and prosperous life. 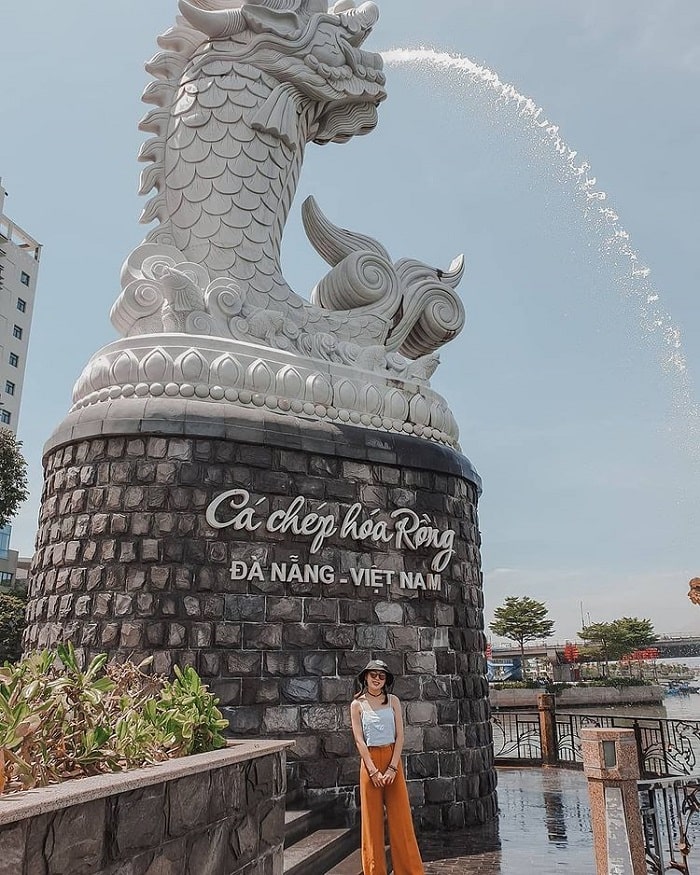 What does the Da Nang Dragon Carp mean?

In terms of Asian culture, the carp symbols are always very important because it has many meaningful values. According to folk beliefs, the dragon carp is a mascot symbolizing strength, power and luck. Now, this concept is still maintained. Dragons in the East and the West are based on the image of dinosaurs that can swim under water and fly into the sky. 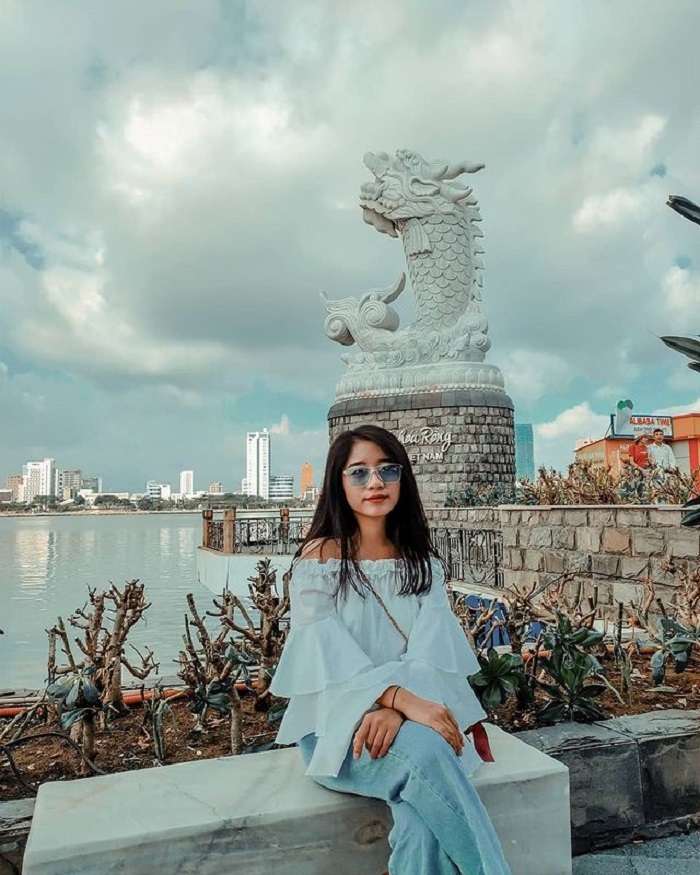 According to the old story that the dragon contest took place in heaven, all the animals everywhere will come to participate and each one has to fulfill its duty at the door of the Vu Mon Gate. However, during a long month, no animal could ever pass it. Until one day, a carp appeared in the mouth of a pearl and passed through the gate of Vu Mon and turned into a Dragon. Since then, the dragon carp has become a legend. The Da Nang Dragon Carp  is built with a belief that brings confidence and success to the city. 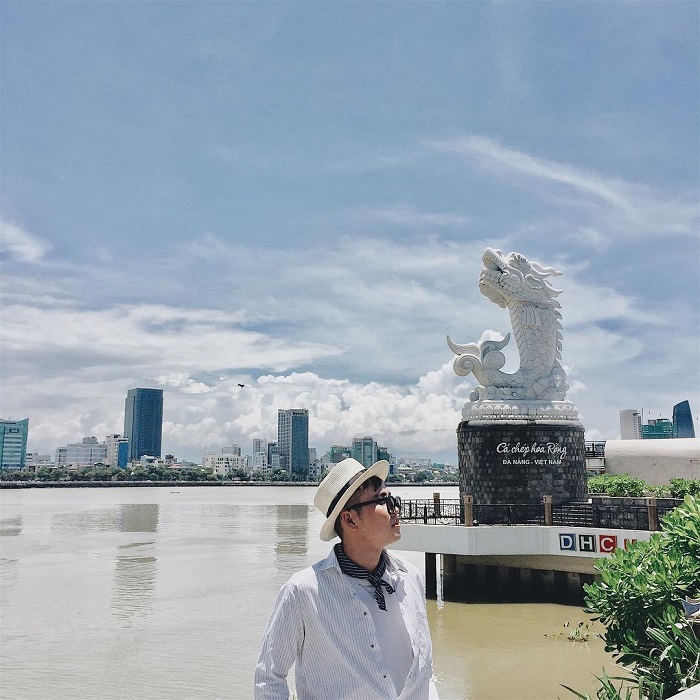 The unique architecture of the Dragon carp

The Da Nang Dragon Carp is designed and sculpted by many skilled craftsmen in the Non Nuoc stone village. The work has a combination of 5 white stone slabs weighing up to 200 tons, 7.7 meters high and the sweat drops of artisans working for 3 months. 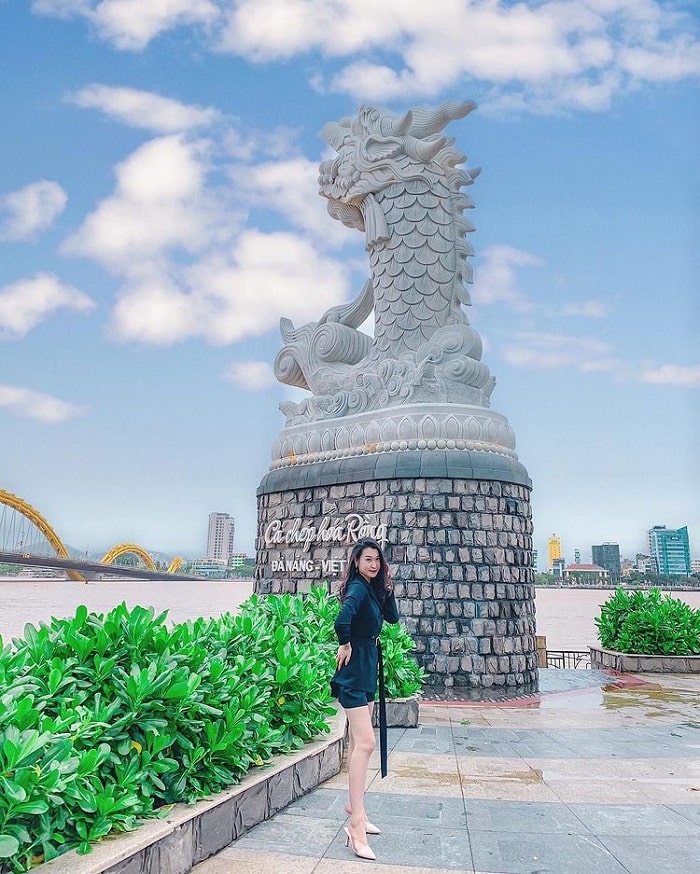 The structure of the statue includes the head, which is crafted with details bearing the architecture of the Ly Dynasty. The body of the Dragon is engraved with delicate scales, along the spine are stylized layers like dragon’s back. Dragon legs are two stylized hands lying symmetrically on top of a wave layer.

The statue is a prominent architectural highlight of the whole city

The Dragon Carp is not just an ordinary statue, but also has a sprinkler system installed at the head. This is the detail to perfectly reproduce the watering detail with the universal significance of the carp when transformed into a dragon. 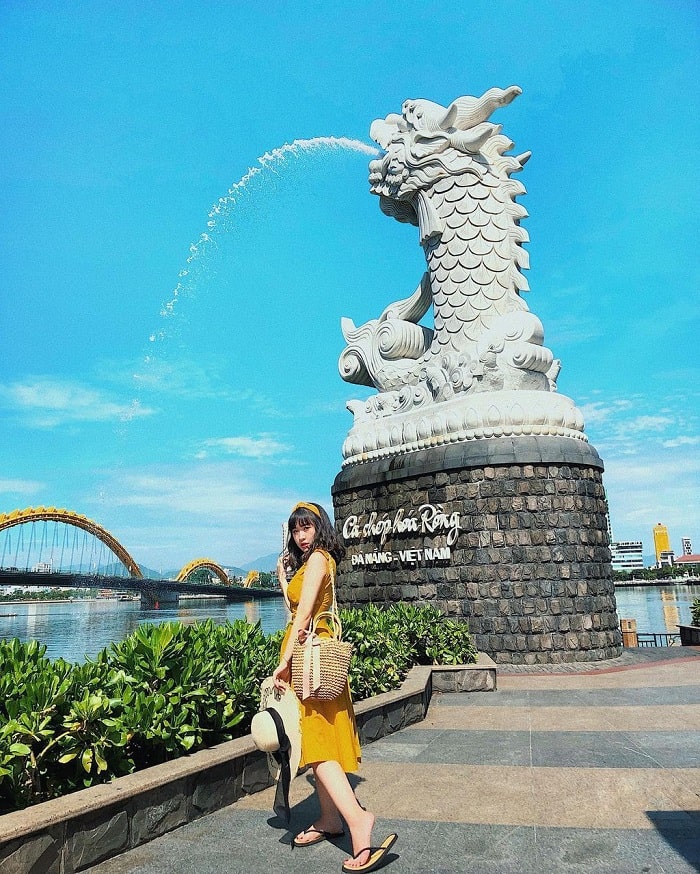 What to do when visiting Da Nang Carp Hoa Rong statue?

The Dragon Carp Hoa Da Nang is a special highlight of tourism in the coastal city of Da Nang. Even if you come at any time, you have to stay a little to come here to walk along the river, admire the scenery, breathe fresh air and save wonderful moments. 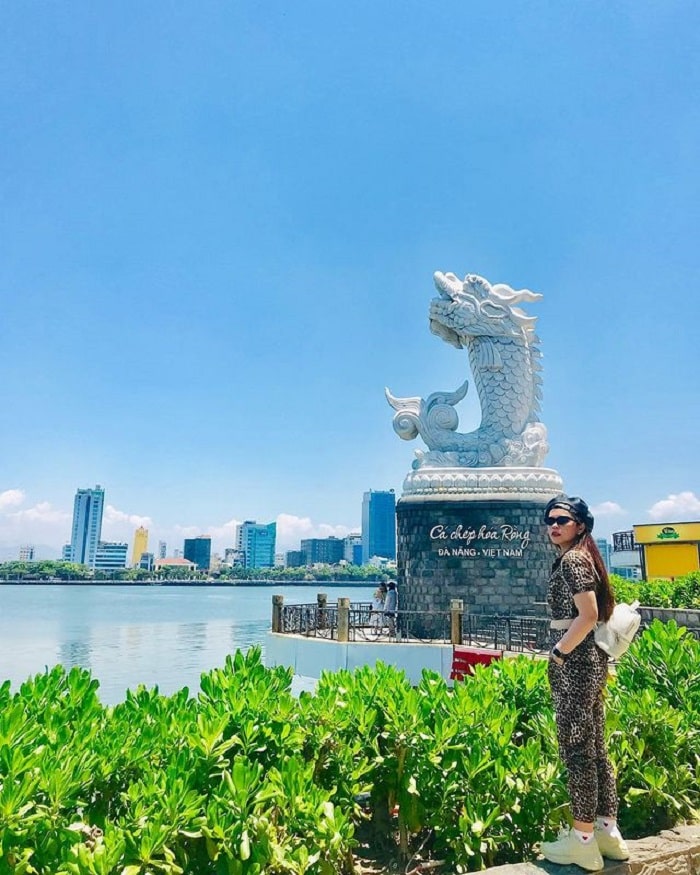 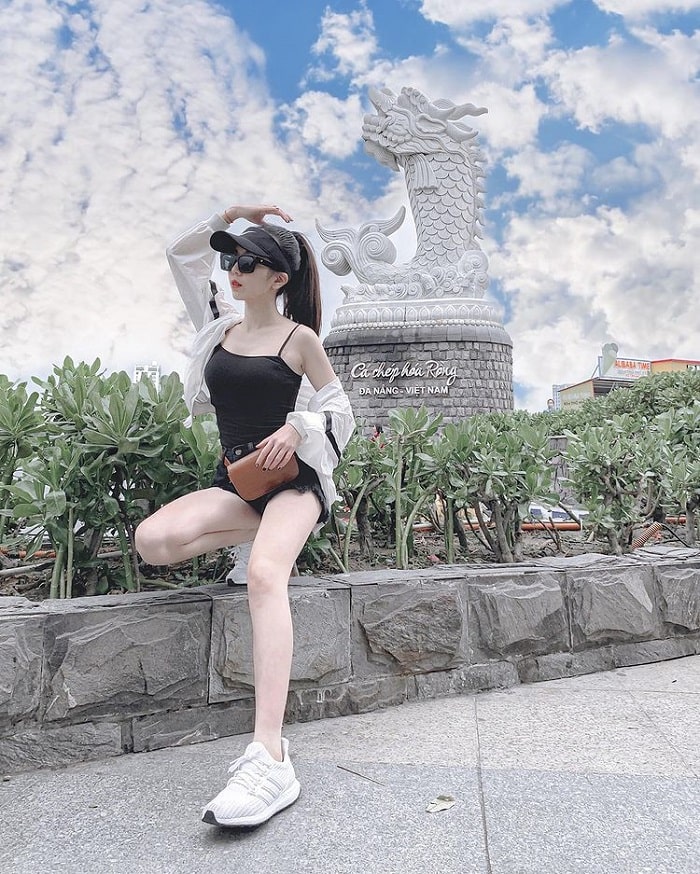 Not only that, from the Da Nang Dragon carp , visitors also have the most comprehensive view to admire the peaceful beauty of the whole city. Right in front of you is the gentle Han River, flickering in the distance are different large and small boats. However, the most magnificent and expected moment is seeing the water-spewing statue and the Dragon Bridge spewing fire. 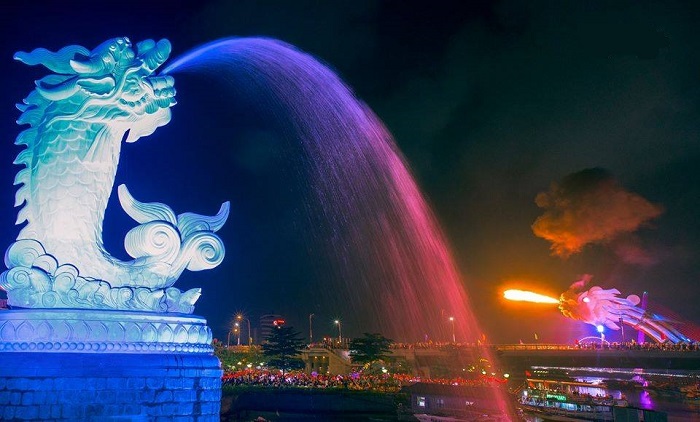 Right next to the carp Hoa Rong statue is the Bridge of Love , one of the tourist destinations loved by many tourists. Although it only owns a quite short section, but the bridge is decorated with many red heart patterns and love keychains creating a very romantic scene. 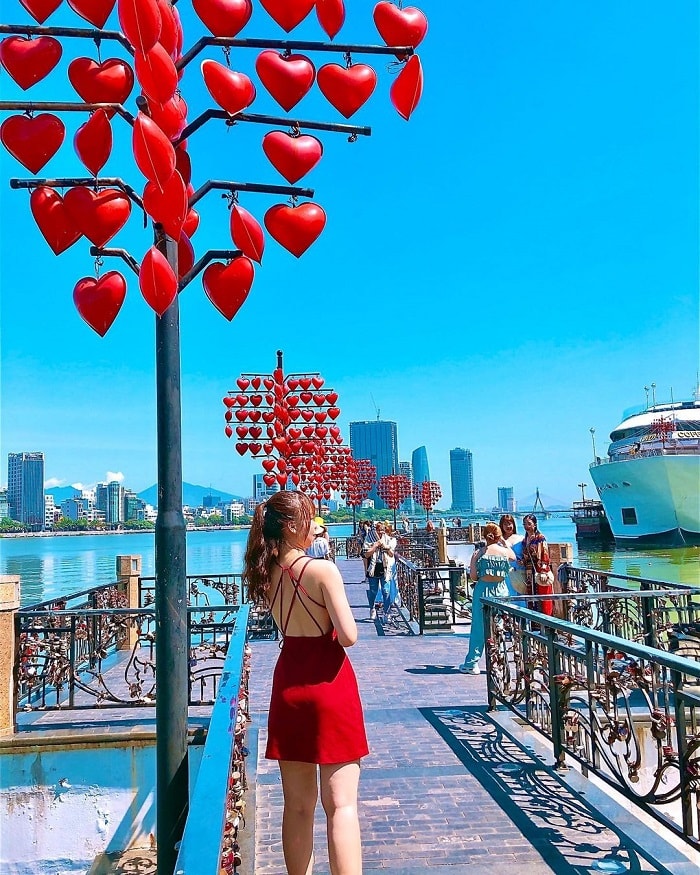 Son Tra Night Market is the second largest night market in Da Thanh. This is a convergence of many stalls such as souvenirs, clothes, cuisine, … From the statue of Hoa Rong Carp, you only need a few minutes to come to this bustling market. 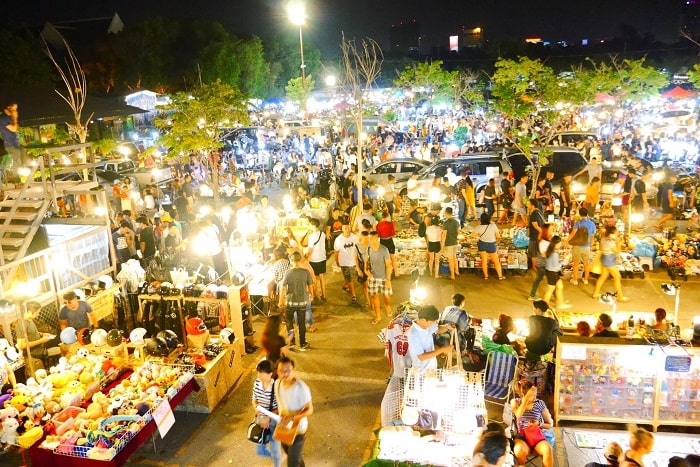 Possessing a unique design that recreates the image of a Dragon “dancing” on the water, the Dragon Bridge has succeeded in attracting the curiosity of many visitors. If you go on a weekend night, you can also see the Dragon Bridge spraying fire and water. 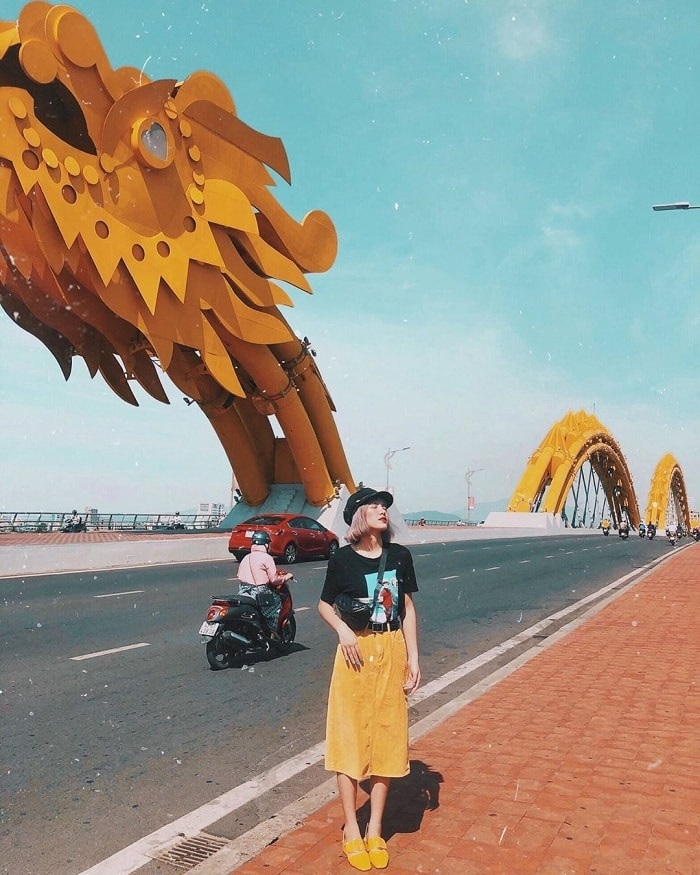 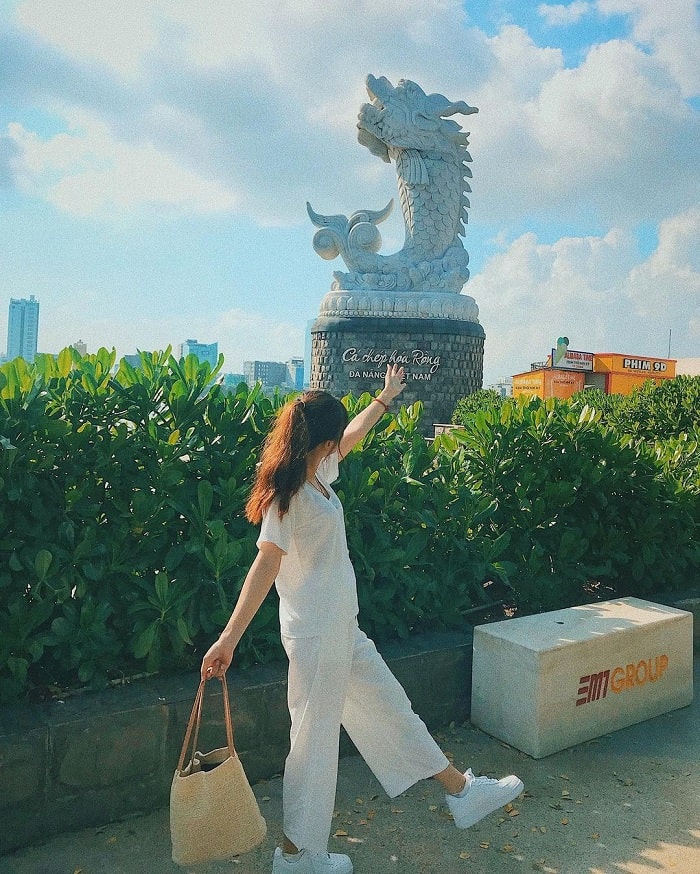 If you have the opportunity to once visit the statue of Da Nang carp Hoa Rong to be immersed in the romantic scenery while walking on the banks of the Han River, sipping more sweet milk tea will make your soul suddenly relax, strangely gentle!