Con Dao is located separate from the mainland, possessing pristine nature that is preserved with rich resources from forests to the sea. Hidden under the ocean many rare species of flora and fauna, in which the fire lobster Con Dao is a type of seafood sought by many people for its high value and rare.

Some information about fire lobsters

Fire lobster,  Con Dao fire lobster  , also known as red lobster, belongs to the spiny lobster family. Its defining feature is long-legged spiny lobster with a shiny outer shell, characteristic reddish-brown color. Above the body covered with spines are large white spots. Its size is not too large, averaging only 20 – 30cm. It can be found inhabiting reefs or hidden in undersea coral reefs in the tropics or subtropics. 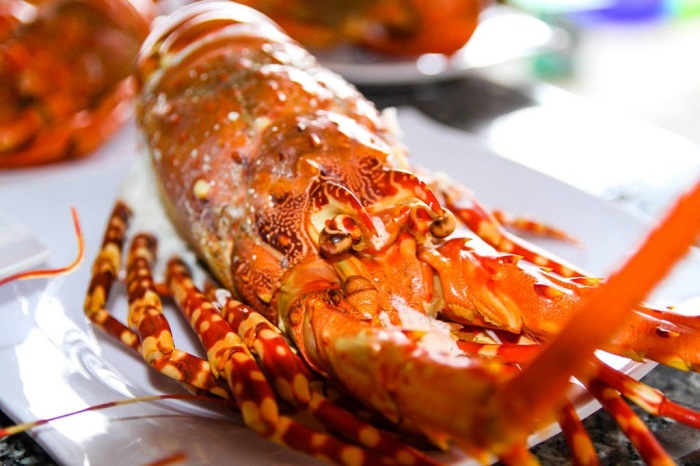 In Vietnam, Con Dao red lobster and lobster are listed in the rare red book, but on the list of seafood allowed to grow, produce and trade. It is a species with high nutritional and economic value, but not everywhere. It is distributed mainly along with the provinces such as: Quang Binh, Phu Quy Binh Thuan Island, Binh Ba Island and Binh Hung of Khanh Hoa, Ly Son – Quang Ngai and Ba Ria Vung Tau . 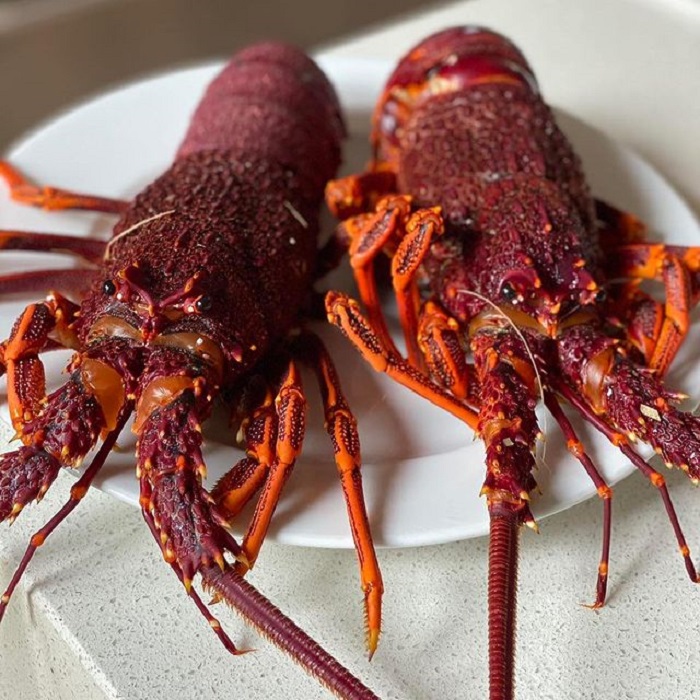 Con Dao fire lobster why worth?

As mentioned above, fire lobsters are found in many seas in the Central or South Central Coast. But why is it more famous and sought-after by many people than in Con Dao? First of all, lobsters in this area cannot be kept in the usual familiar cages, but can only be obtained from natural fishing offshore. 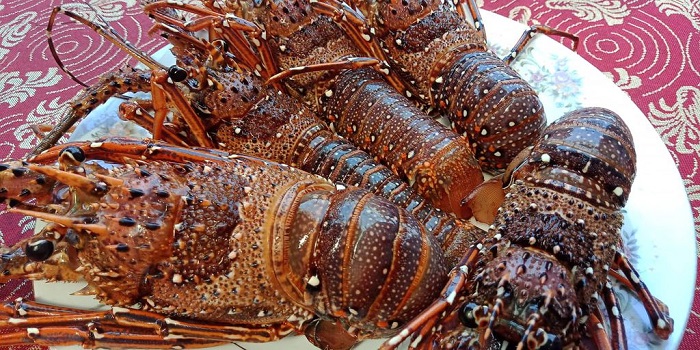 The meat of wild shrimp being processed will have red-orange characteristics, firm texture and strength, sweetness with interspersed little salty sea, the nutritional value give higher should be the specialty of Con Dao that anyone ” hunt ”. Besides, its growth rate is very slow, its size is small, so it is not always much to exploit, so it is very rare, the price is also higher than other types of lobster purchased in other regions. 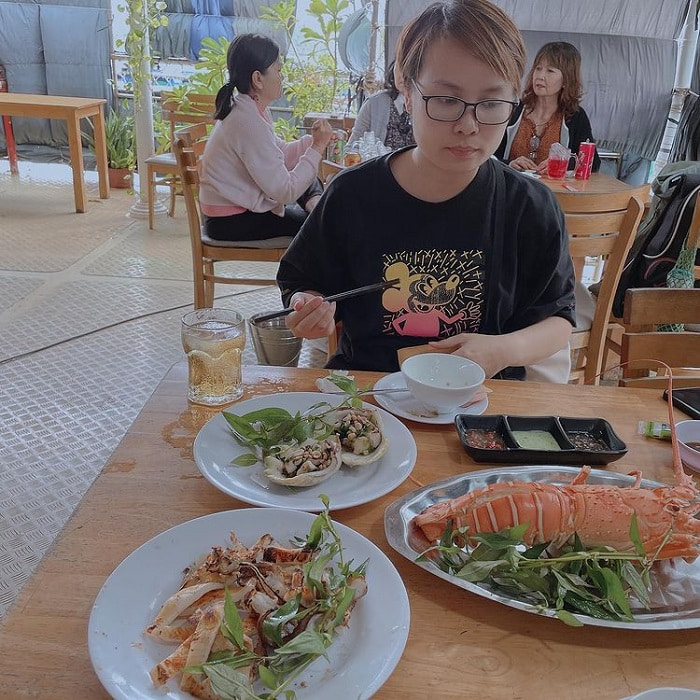 Fire lobster caught in the waters of Con Dao has a high nutrient content, rich in selenium, omega 3. The amount of protein in shrimp meat is large, while in terms of calories or fat, cholesterol is quite small, so it’s good for health. user’s. Preventing and contributing to the treatment of thyroid diseases, heart disease, diabetes, anemia, … especially the yellow shrimp brick. 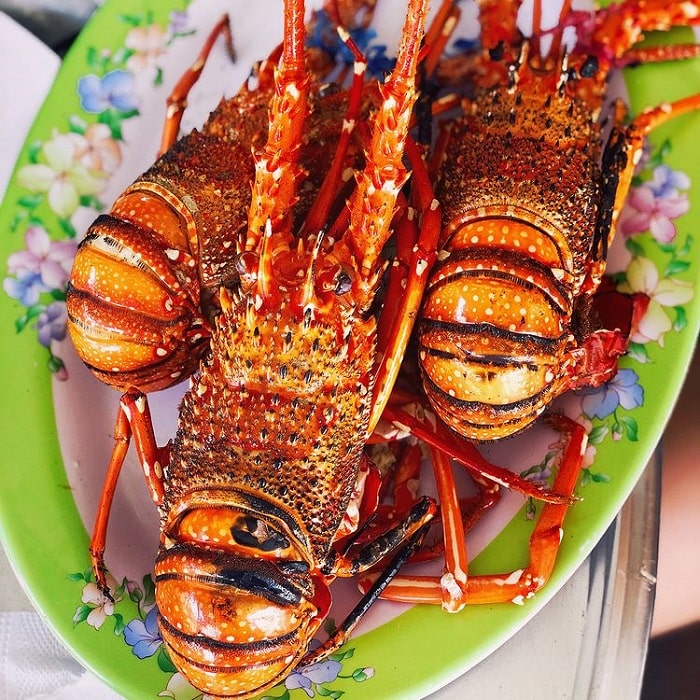 For all the reasons of economic value, the rare and precious nutrients that resonate together make seafood famous in Vietnam. So Con Dao fire lobster is also known as the “king of seafood” in this coastal land. Becoming a rare gift attracting tourists to enjoy in the traveling itinerary or bringing home as a gift for family members. 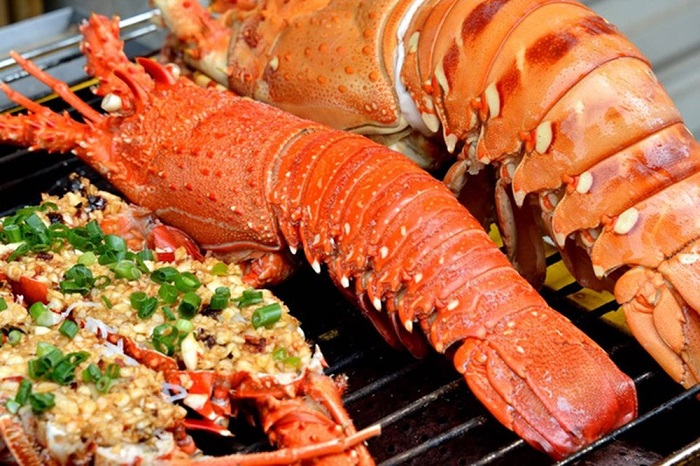 How to choose fire lobster in Con Dao

Because of its rarity and great value, it is also important to choose how to buy red lobster fresh and delicious. There are some notes for you to buy quality seafood as follows:

– Fire lobster is available all year round, but in winter, the meat will be better. Especially with the brick shrimps, the head and back parts along the spine have more yellow brick streaks than other seasons. 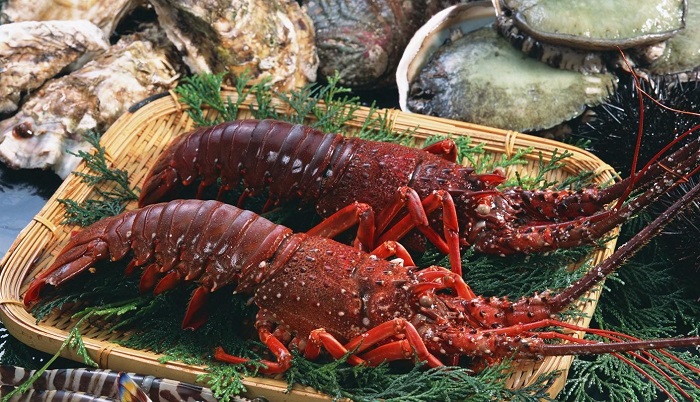 – Traveling to Con Dao to seafood markets choose which fire lobster to hold the baby must be firm, with the remains, the legs and legs are strong so as not to fall off easily. Red shrimp frame, bright color, not dull, pale. The body is bent, not straight.

– Particularly the joints of the head and the body of the shrimp also need to be noted, they must match, not to protrude much to ensure freshness. Touching the fire lobster did not see it melted, it did not smell too fishy because it was dead. 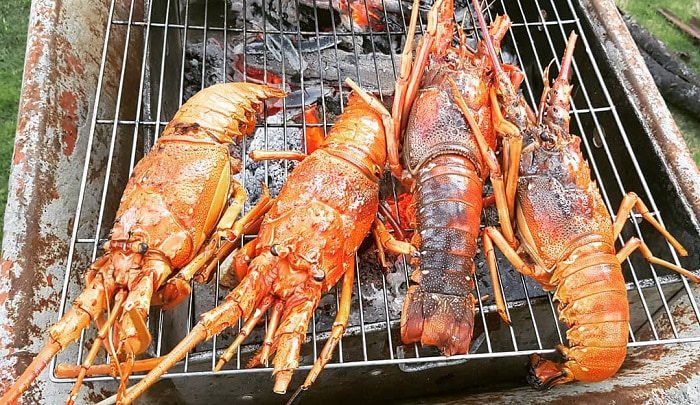 Where to buy fire lobster in Con Dao

On the way to visit and visit tourist sites you will find many places selling fire lobster Con Dao . Some of the addresses are passed by tourists, such as the big seafood markets, typically on Tran Huy Lieu street, there are stalls selling from morning to night. But one experience is that you should visit the fishing villages, where there are idyllic houses. Here, both sightseeing and buying lobster caught by themselves at a cheaper price than elsewhere. 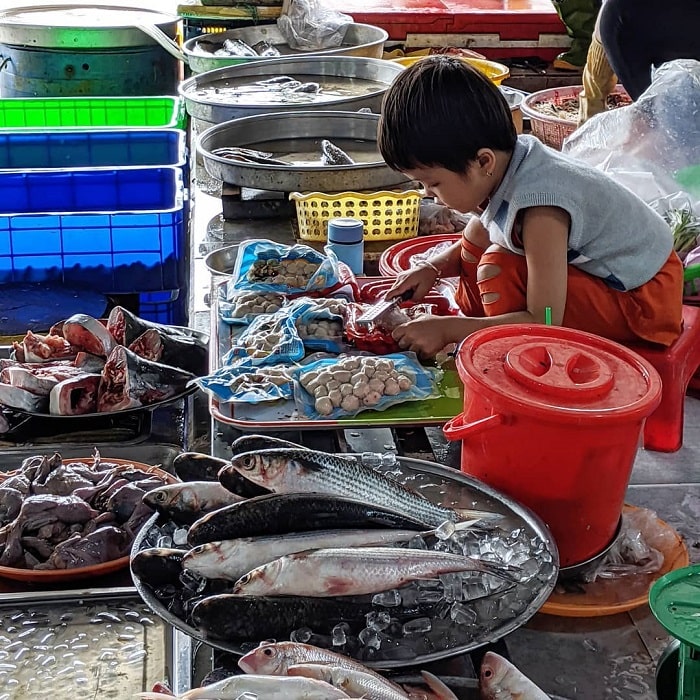 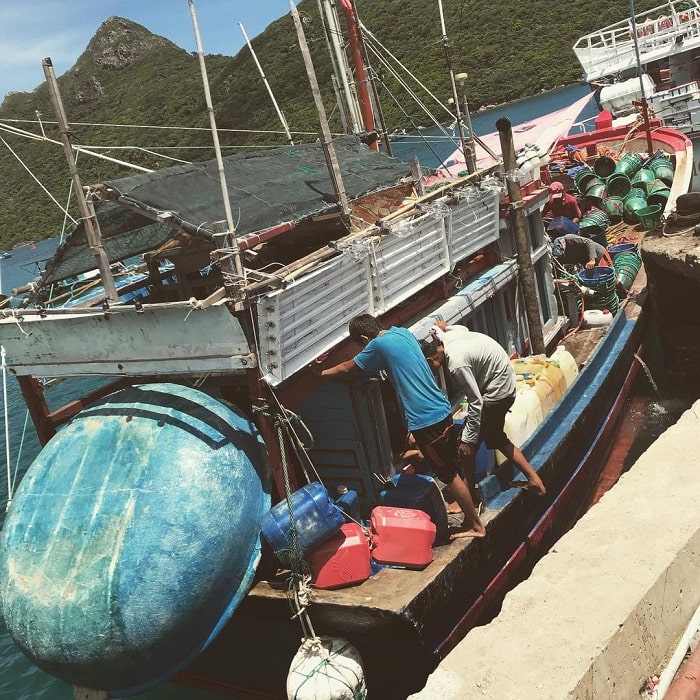 As a dish with high nutritional value, there is no need to process too sophisticatedly or cook for a long time to retain its inherent flavor. Bring back the initial cleaning and pre-processing, a useful tip is to put the shrimp in the refrigerator for a while, which is easier to do. After that, you can take it out to grill, boil or steam beer quickly. Or more sophisticated, then grilled with garlic butter, grilled with cheese, tamarind sauce, fruit sauce, … 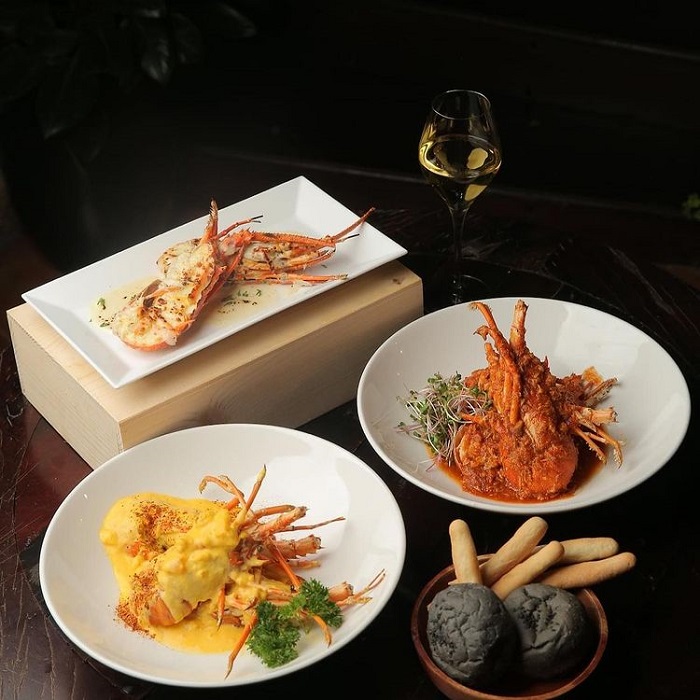 For those who are tired or sick, a hot pot of porridge or lobster soup will help foster health and recover faster. In addition to seafood such as: Nipples snail , oyster, moon crab, … in Con Dao, fire lobster is always the top favorite. The special taste that is not available everywhere makes everyone love, even the most demanding diners. 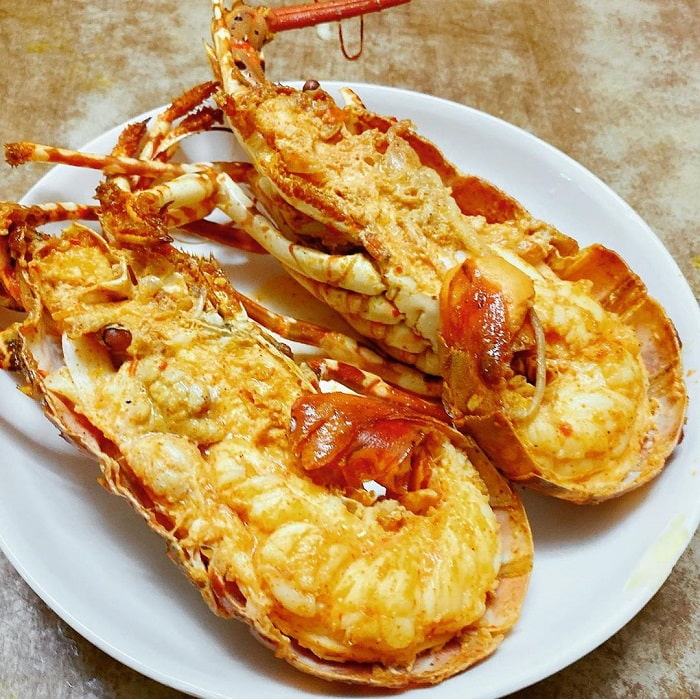 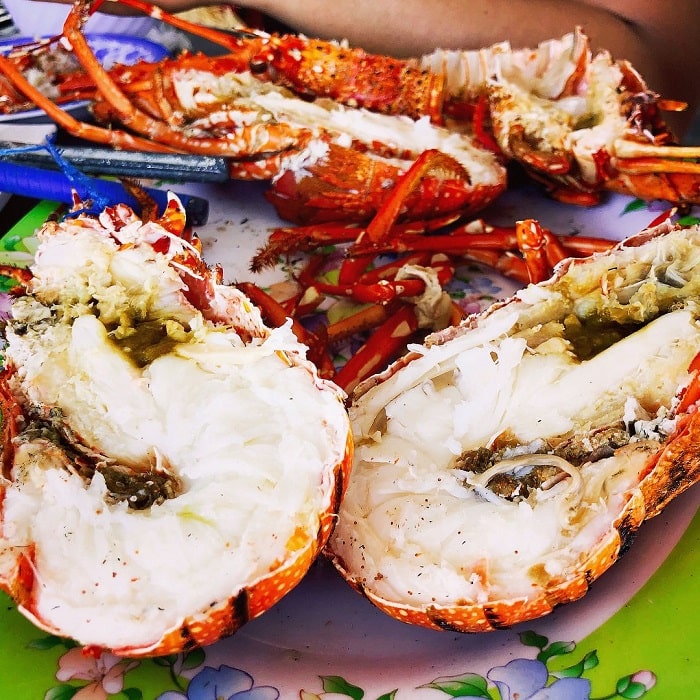 The outing in this “paradise” land stops at delicious restaurants or families gather together to enjoy Con Dao fire lobster . The high value it brings in terms of nutrition, good health or deliciousness that makes everyone nod will not disappoint you. Buy and try to feel right when the opportunity comes!