Tan Trao war zone is the place that marks many historical achievements of the Vietnamese revolution and is the land associated with the great President Ho Chi Minh. Along luhanhvietnam.com.vn explore 7 famous monuments at the relic Tan Trao Tuyen Quang to be immersed in the heroic atmosphere of the years of history.

Tan Trao is a commune located in the northeast of Son Duong district, Tuyen Quang province. This place has recorded many important historical events of the nation and is a place associated with the name of President Ho Chi Minh. This is one of the places that many tourists choose to visit when traveling to Tuyen Quang , there are many famous landmarks for you to explore.

Located in the historic Tan Trao area, Tan Trao banyan tree is considered a symbol of the liberation revolution of the Capital associated with historical events of great significance. This is also a place to educate future generations about our strong fighting spirit and limitless patriotism.

Under the Tan Trao banyan tree on August 16, 1945, General Vo Nguyen Giap read the First Edition of the Military Command under the witness of 60 representatives of the country and all the ethnic Vietnamese North. Shortly thereafter, the Vietnamese Liberation Army held a troop departure ceremony to liberate the capital Hanoi.

Today, under the care of the local government and banyan business organizations in the Tan Trao relic area , more and more shoots appear, spreading shade for visitors when visiting. There are also 6 more multi-seedlings planted around the area, representing the 6 districts of Tuyen Quang province.

La Na Lua is a small shack located on the side of Na Lua mountain. In the past, the shack was built with bamboo, half of the shack was constructed by the mountainous people. This is where Uncle Ho lived and worked for about 3 months from the end of May to the end of August 1945 to prepare for the General uprising. In Na Lua shack is divided into two small rooms. One side is the place where Uncle Ho works, the other side is the place for Uncle Ho to rest.

Here, on June 4, 1945, Uncle Ho convened a Conference of cadres to prepare for the establishment of the “Liberation Zone, the Liberation Army” towards the National Congress, General uprising.

Today, Na Lua shack is still preserved, retains its original simplicity and simplicity and is one of the historical relics in the rich traditional Tan Trao relic so that future generations can understand more. about Uncle Ho’s hardships as well as the Vietnamese revolution at that time.

Tan Trao temple, formerly known as Kim Long, was built in 1853 and restored in 1923 in the style of a stilt house, above the palm roof, inside there are wooden columns with 3 rooms and 2 wings. This is the place to worship the gods of rivers and mountain gods of the village. Under the roof of Tan Trao on August 16 and 17, 1945, Uncle Ho and the Central Committee had a meeting with the National Assembly of the National Assembly, where the call for national salvation was sent to more than 20 million people across the country. At present, the General Uprising took the government to victory, bringing the country into a new era.

Dinh Tan Trao is both a place to educate later generations about the nation’s patriotic traditions and also a place to visit with great historical significance in the journey to return to the origin of the Vietnamese people.

Dinh Hong Thai is the first stop of President Ho Chi Minh when he returns from Pac Bo – Cao Bang. This is also an important communication station of the ATK Security Committee in the resistance war against the French colonial invasion of our nation.

This is not only a place for cultural activities but also a place where many important events of the Vietnamese revolution took place. contributed significantly to the overall victory of the General uprising of the August Revolution and the long resistance war against the French colonial invasion of the entire nation.

Bong Cave is located in the middle of Bong mountain, below is the Pho Day river surrounding it. This is one of the famous landmarks in the Tan Trao relic that you cannot miss when coming here. Hang Bong was the workplace of President Ho Chi Minh during the years against the French colonial invasion. Here, in 1050, leader Nguyen Ai Quoc directed the Border campaign and the National and Second Party Congress to take place in 10951.6. Kim Quan – the safe headquarters of the Party Central Committee, Government

Kim Quan relic in the area of ​​Khuon Dien village, Kim Quan commune, between two forests, Vuc Nhu and Na Loi, is one of the historical relics of the Vietnamese revolution.

Here is the home of General Secretary Truong Chinh, the home of comrade Hoang Quoc Viet, Le Van Luong and parts of the old Central Office. Vuc Nhu side is where Uncle Ho lives and works. Kim Quan was also the place where Uncle Ho, the Party Central Committee and the Government welcomed international delegations at that time.

Today, Kim Quan relic is ranked by the Ministry of Culture and Information as a national monument in need of protection. 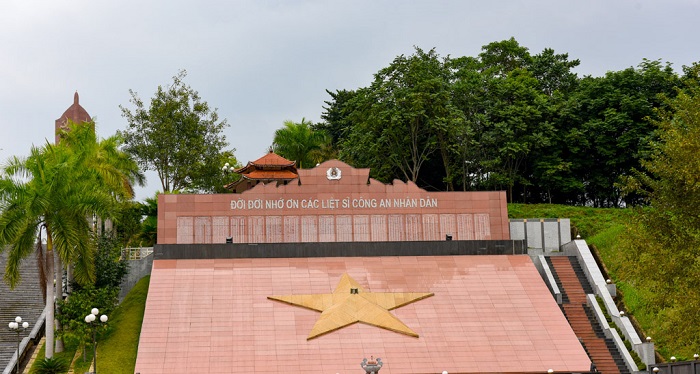 Cong An House is a renovated work and inaugurated in 2000 to celebrate the 55th anniversary of the establishment of the People’s Police of Vietnam. This place is the headquarters of Central Trung Ung Police Department and other units that protect Uncle Ho. Here took place many important historical events contributing to the victory in the war against the French colonial invasion of the entire nation. This is one of the stops for tourists on their journey back to their source.