The victory relic of Dak To – Tan Canh is a place that has marked the heroic victories of our army and people in the war against the US for national salvation. This is also a famous destination that many tourists visit when returning to Kon Tum land.

As a place that has gone down in history, the Dak To – Tan Canh victory relic has reminded generations of our nation’s majestic struggles in the years 1967, 1969 and 1972. Date Nowadays, the Dak To historic site has become the pride of the Kon Tum people in particular and the Vietnamese people in general. This is also a famous destination that many groups of tourists visit when arriving in the mountain town. The victory relic of Dak To – Tan Canh

Where is the Dak To victory relic?

Dak To historic site is located in Tan Canh commune – Dak To district – Kon Tum province. From the high points of Ngok Bo Bieng, Ngok Ring Rua, we will cover the whole relic like a basin with 4 sides of majestic mountains with: the West and the Southwest is the high Ngok Bo Bieng mountain range. from 800m – 1200m, stretching from Southeast to Northwest and bordering Lower Laos and Northeast Cambodia – where Indochina confluence. To the north is the Ngok Tu mountain range with an altitude of 890m; The east is Ngok Long mountain 903m high and road 14 goes to the city. Kon Tum.

Currently, the area of ​​the Dak To relic is 90 hectares, including the following items: E2 base, L19 airport, Phuong Hoang airport. In 2017, Dak To historical relic was recognized as a special national-level historical monument. The communal house in the relic area

About the victory relic of Dak To – Tan Canh About the victory relic of Dak To – Tan Canh

And to keep that important strategy, the US imperialists and the Saigon puppet authorities focused on building in the North Central Highlands into one of the strong military defense systems and the center of the defense cluster was Dak. To – Tan Canh.

In 1957 – 1972, the US – Wei built in Dak To territory with the most solid defense system, including: Base E42 in Tan Canh and Dak To 2 base. This is also the headquarters of the 22nd Division. , 42nd Infantry Regiment, 14 Armored Regiment, 5 Artillery Battalions and Border Guard Command …

On the West bank of Po Ko River, 10km southwest of Dak To – Tan Canh base, is a fire base such as: Dal Ta base, Charging Ly envoy (high point 1015) … Along the Vietnamese border – Laos is border outposts, including: 88th Battalion (Dak Pek district mandarin district); Ranger Battalion 62 (base Plei Kleng); 95th Battalion (Ben Hech also known as the Plei Kan Point Base). In the Southeast, there is the command of the 3rd Paratroop Brigade, Mang Den, Mang But base, Non Nuoc base … This has become a closed cluster of enemy bases in the North Central Highlands with numbers. crowded, dense, most advanced weapons at that time.

In Dak To – Tan Canh where many fierce battles took place between us and the enemy, but must mention the big campaigns that took place here such as:

– Dak To II campaign (1969): Our army also destroyed many enemy forces, contributing to defeating the local war and the American plan to destroy the battlefield in the Central Highlands.

– Spring-Summer 1972 Campaign: we smashed the entire base at Dak To – Tan Canh on April 24, 1972 and continuously destroyed all the military defenses of the enemy in the North Central Highlands, liberated over 40 thousand people in districts such as H67, H30, H80, H9, expanded the liberated area and created a continuous base of 3 Indochina countries from Lower Laos to Northeast Truong Son. Thanks to that, we have shortened the time to transport talents, materials, weapons, goods and ammunition to the battlefield of the South and make an important contribution to the liberation of the South to reunify the country.

Historical significance of Dak To relic

Nearly half a century has passed, although the relic does not retain many artifacts, but in terms of its historical value and significance, it has always endured over time. The Dak To victory historical site has become the source of many generations of Vietnamese people, especially Kon Tum people, in educating the young generation about patriotism and national pride. And this has also become a favorite destination for domestic and foreign visitors who want to learn about the old battlefields.

Relic sites related to the Dak To victory zone

The victory relic of Dak To – Tan Canh is located at an altitude of 600m above sea level. The starting point of the site is the Dak To Kan stream and the last point is Dak To Base where the Po Ko River meets the Dak Ro Nga stream; with all the relics located on Highway 14, section Dak To – Ngoc Hoi with a total length of up to 7km.

An area of ​​up to 20ha is located on a 600m high hill with two sides surrounded by river and mountain, one side is national highway. On the land of the current base E42, it is planned and set up with landmarks for the purpose of zoning and protecting relics. Here, there are signs leading to relics, prohibition signs of invasive relics and rocky seas indicating ancient fortifications. Located in the northwest of E42 base and about 400m from the center area with a total length of 1km, width of 50m, the airport runway is paved. This airport has been used by the French military for its aircraft, L19s and small aircraft. The works in the Dak To relic

These are typical works of the victory relic of Dak To – Tan Canh and have been embellished. The beer house was built adjacent to the winning exhibition of Dak To. Opposite is the martyrs’ cemetery in Dak To district – is the resting place of communist soldiers who sacrificed themselves to protect the country in the years 1967 – 1972. 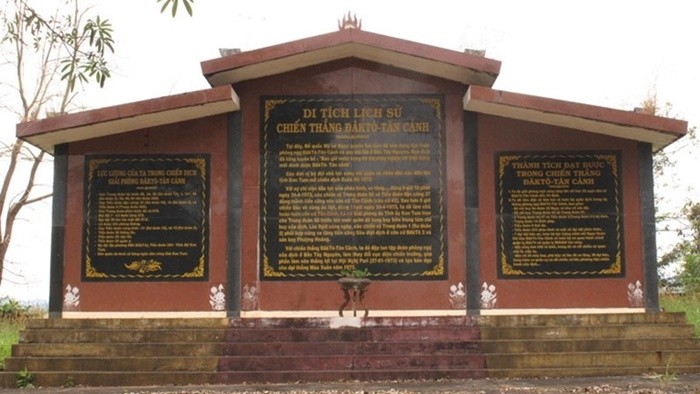 Located on the intersection of National Highway 14 (Ho Chi Minh Road) and National Highway 40B going to Quang Nam right in the town of Dak To is the Dak To victory monument built-in 1998. It is a chimpanzee symbol. immortal god, decisive victory of the armed forces as well as the Party and people of Dak To district. 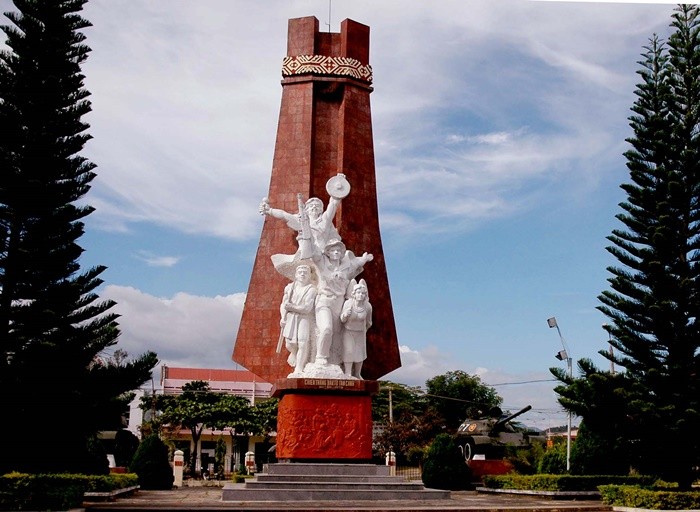 The two sides of the monument are displayed 2 tanks 377 and 472. These are two tanks that participated in the battle of Dak To – Tan Canh in 1972. This is the original artifact restored to serve visitors. sightseeing. 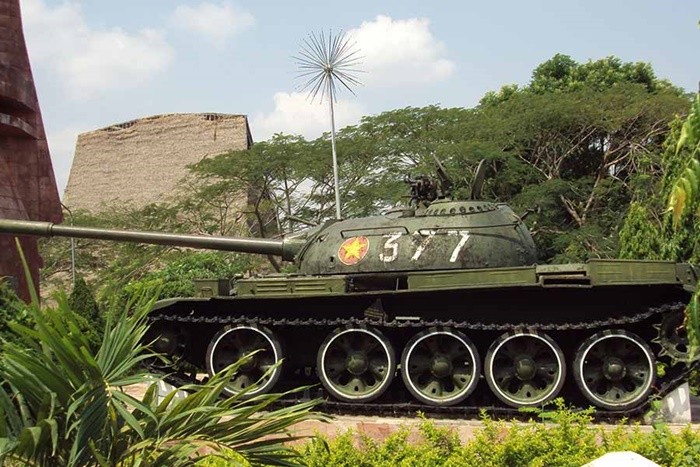 Places to visit near the Dak To victory relic

Visiting the victory relic of Dak To – Tan Canh , visitors will have the opportunity to admire the beautiful glass-painted landscape of the land here. Not far from the Dak To base area to the northwest is the Po Ko stream from the district of Dak Glei that runs through the Dak To base area into the valley and merges into the Dak Bla river to create the Sesan stream. phone poured into the Mekong River. The southwest of the monument is also a continuous mountain range extending to the west of the Truong Son Tay range that used to go into poetry such as Ngoc Linh Rua, high point 1015 charging Ly Hill, Ngok Bo Bieng … 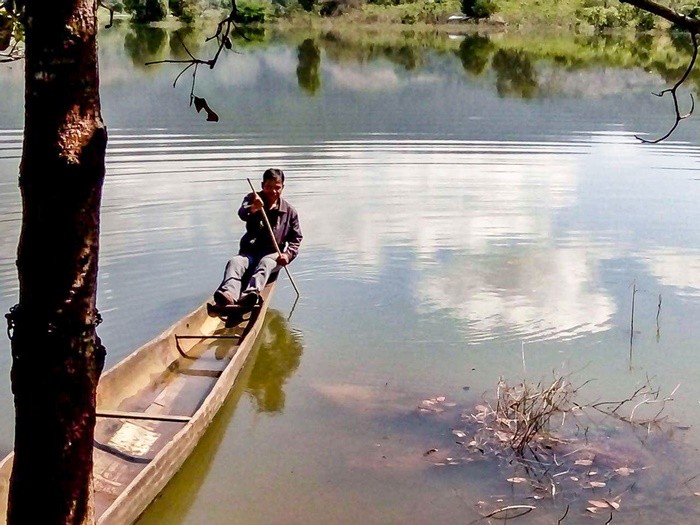 In addition, visitors will visit the villages of Xe Dang field near the Dak To victory site next to the Kinh residential areas from the provinces: Binh Dinh, Quang Ngai, Quang Nam to settle later. in 1945. Here, Xe Dang ethnic people still preserve and preserve historical and cultural values, unique to help visitors better understand the lifestyle and living habits of the people here as : festival, gong culture … And if you love historical stories and like to learn about the long resistance wars of the Vietnamese people during the war; surely khu relics victory Dak To – Tan Canh is an interesting destination with historical significance story waiting for you to discover on a journey to visit the land of Kon Tum jog.