Thach Ky Dieu Tau 石 磯 釣 叟 (Lao fishing rapids) is a young and fresh area on the south bank of Sa Ky seaport, in An Vinh village, Tinh Ky commune, Son Tinh district, away from the provincial capital of Quang Ngai 16km, northeast. This is the second beautiful scene of Quang Ngai by the class after Nguyen Cu Trinh and is the last scene in Quang Ngai, the second scene that has been praised by the writers and poets of the past.

Quang Ngai is not only famous for Ly Son island, but also surprisingly beautiful places like Thach Ky Dieu Tau. With the inherent simplicity of the rocky rapids, Thach Ky Dieu Tieu still exuded the charming beauty of the human heart that nature has bestowed. This place is known as one of 12 famous tourist destinations famous for Quang Ngai province.

Thach Ky Sa Tau is located in An Vinh village, Tinh Ky commune, Son Tinh district. From the center of Quang Ngai, you move along Highway 24B to the Northeast for about 16 km. Thach Ky Dieu Tau is a rocky cliff located at the mouth of the beautiful Sa Ky sea, outstanding with the image of two towering rocky mountains. You can find out the way through Google maps or ask local people.

The amazing story behind the name Thach Ky Dieu Tung

Referring to the name Thach Ky Dieu Tau, many people are curious when hearing such a strange name, behind it is an interesting story about the origin of this rock. Legend has it that, in the past, this was a tank, a giant man in the process of filling the seaport because the rock was too heavy broke the lever when only the last one was finished. At this time, rocks fell to the sides to form two mountains and the giant man’s footprint is still imprinted here. This story has been passed down through many generations, creating an interesting feature for Thach Ky Dieu Tung. Therefore this rocky cliff is also known by the name Lao fishing rocky rapids or giant feet.

According to the dictionary, Thach Ky Dieu Tung is simply understood as a rocky rapids or an underground rock, the water flowing through the rock creates a surprisingly beautiful water-color painting.

Thach Ky Dieu Tau is beautiful in the middle of the blue sea, white clouds

As one of the tourist destinations that still retains the inherent pristine features that the mother of nature gives, Thach Ky Dieu Tau has become a very ideal place to attract tourists when coming to Quang Ngai. Different from the richness and richness like Ly Son, this place has a mysterious and unique beauty because of the geological structure of the rock rapids. Thach Ky Dieu Tau is a complex of rocky rapids and caves in diverse shapes created by the process of sea erosion. This place is like a majestic painting painted by lava blocks with the color of time rising between the clear water and the blue sky.

From the geological structure layer, black gray lava has formed massive rocky rapids, through the erosion process of the sea creating indentations of the giant’s feet. Come to Thach Ky Dieu Tau, you should try to stab your feet into this giant footprint! Because people think that if someone stumbles their feet into that giant footprint, in life, they will meet many luck.

Besides the footsteps, there is an eroded rock called the Wine Cellar, creating a majestic scene when the waves rush in. Everything has created a one-of-a-kind Thach Ky Dieu Tieu scenic spot that captivates the hearts of many distant travelers. No hustle, no noise, this place has a serene and deep beauty, especially when the sunset falls.

Coming to Thach Ky Dieu Tau, people not only love the natural beauty here, but also feel heavy for the rhythm of life and people on this land. A simple rhythm of life with the waves, with the boat and the children of the fishing village and the generosity of the people here. A Thach Ky Dieu Tau creates unforgettable impressions, you can swim, dive, watch the sea or go fishing, this is also a famous place for extremely fresh seafood bearing the imprint of the people. Made in Quang.

If you are a fan of adventure travel, do not miss camping here to fully admire the beauty of Thach Ky Dieu Tau every dawn. You can park your car at people’s homes and walk down, choosing a suitable plug on the rocks. Camping at Thach Ky Dieu Tieu is definitely a great experience when the night comes to lie and listen to the murmuring waves, early in the morning watching the sunrise on the sea, just thinking about it makes you feel relieved.

Note, at present, the local government has defined Thach Ky Dieu Tau as a place where crowds are not gathered; filming and photography is prohibited. Therefore, you should consider choosing suitable for a small trip and comply with the above regulations. Although it is not possible to capture great images, it is certain that truly admiring the magnificent and enchanting beauty of this place will not disappoint you.

A trip to Thach Ky Dieu Tau not only helps you admire the beauty of nature but also admire the peace in life from the scenery to the cuisine and the people here. With the above sharing, Thach Ky Dieu Tau is definitely a great destination that once-visited visitors will remember forever.

If you have ever set foot on Disc rapids in Phu Yen , you will probably immediately recognize that the image of the rapids in Thach Ky Dieu Tau has a lot of similarities, with clear black striking between the sea and sky waves. overlap into unique shapes. 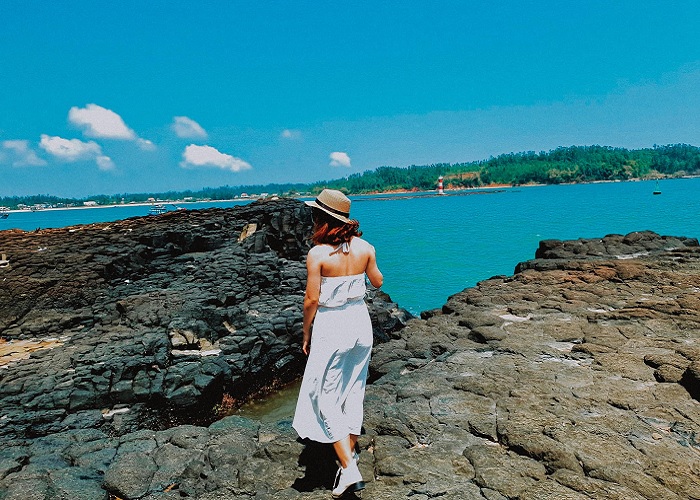 Therefore, although there is no specific evidence about its formation, we can also surmise that this is the lava flow that was erupted from the volcano that was active hundreds of hundreds of years ago. Thousands of years, after spilling into the sea, cold water has been frozen and cooled down into sedimentary rocks as today.

But the special feature of Thach Ky Dieu Tou rock cliff is that they are not only shaped like a pile of dishes in a ceramic kiln, but are also eroded by waves into hollow rock caves inside with different sizes and widths. . In addition, the waves here are also strangely strong, each time the bucket comes in, the water will seep inside as if it is boiling and the cave’s entrance looks like a winery, so the people have called for fun. is the Wine Cellar. 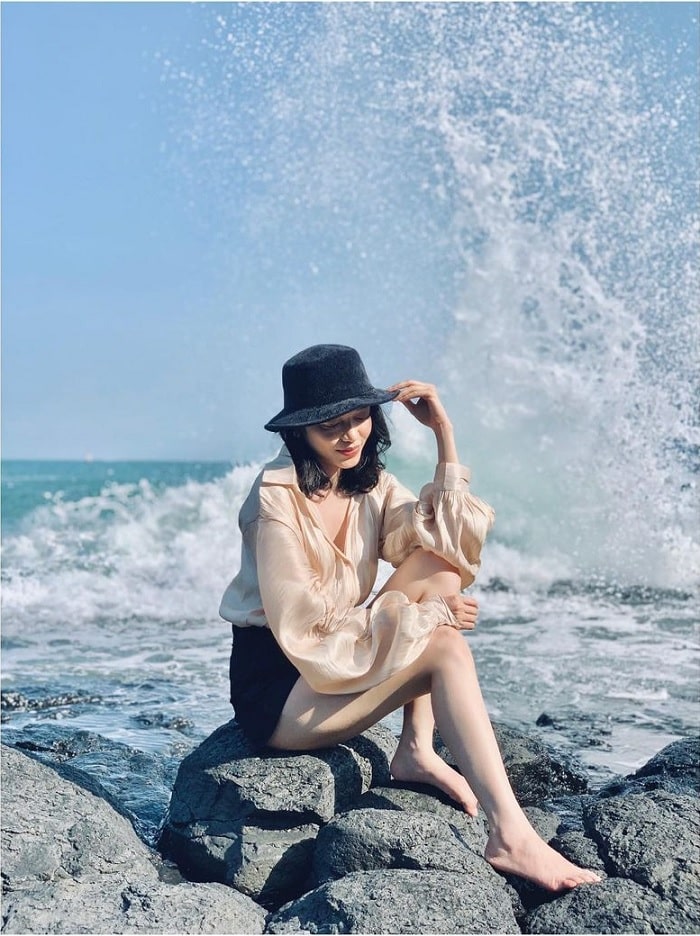 Waves bounce back and forth (Photo @ to.ny_nguyen)

In addition, on the exposed rock caves, there are dents like the remaining giant’s feet, until the sea level rises, the water is filled like a mini pool, looking extremely impressive. statue. Revealing, according to the opinion of the people of Quang Ngai, if you put your feet on the footsteps, it will bring a lot of luck. 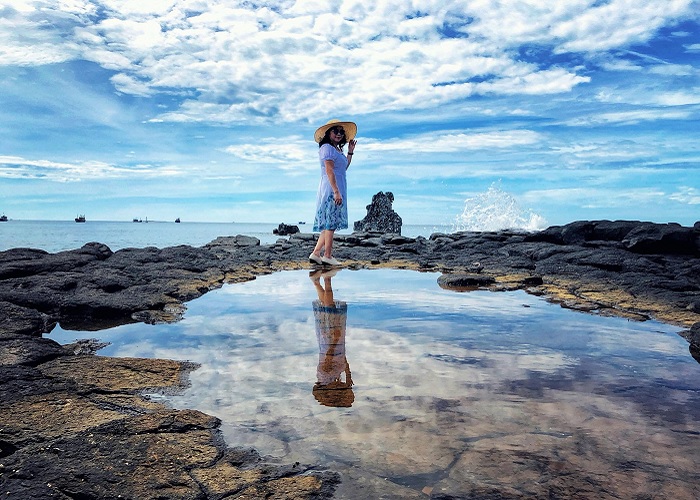 Moreover, in the middle of the Sa Ky high seas, there is also a large rock and a small rock rising up like a person sitting fishing in the water or quietly contemplating the horizon and pondering about life, creating a unique masterpiece, nowhere else. 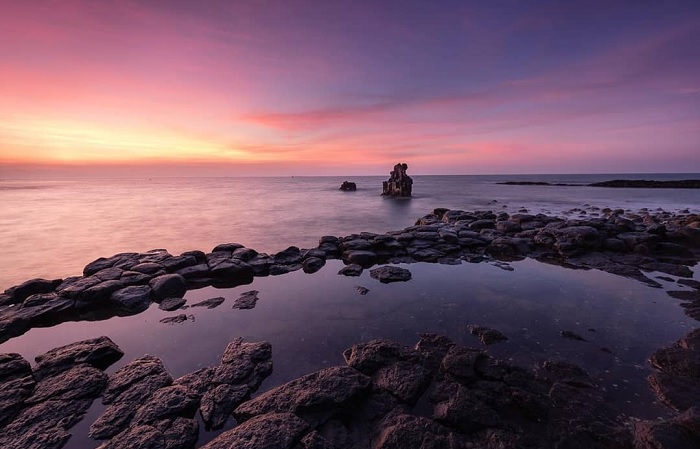 A unique rock in the middle of the sea (Photo @anhtublogg)

In particular, although the stone rock of Thach Ky Dieu Tau in Quang Ngai is always beautiful but most attractive, perhaps in the early morning, when dawn is rising, dyeing the whole space, the mist has not yet melted on the water. creating layers of white smoke embracing rocks, creating a ghostly scene like a strange place, attracting many tourists. 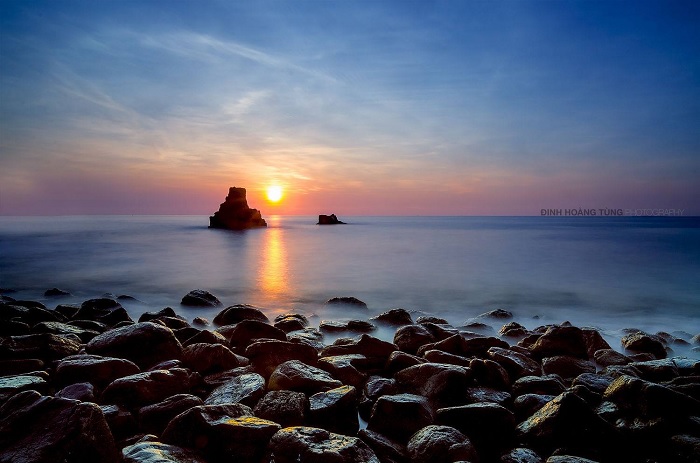 The dawn is full of ghosts (Photo: Dinh Hoang Tung)

Or when the moss season comes, the rocks are covered with a green shirt, like a steppe floating on the water, making anyone coming here can not help admire and be surprised. It can be said that the Creator was extremely favored when he bestowed Thach Ky Dieu Tau rocky cliff not only with unique black rocks, turquoise blue sea water but also with willow lines racing with wind and forest. Duong Bat, forming an incredibly beautiful young picture.

Traveling to Thach Ky Dieu Tung , the first thing that you definitely cannot ignore is virtual live photography, because of the unique shape of the cliffs, and the white foam continuously bouncing on the cliffs … will help you capture a wealth of quality pictures. 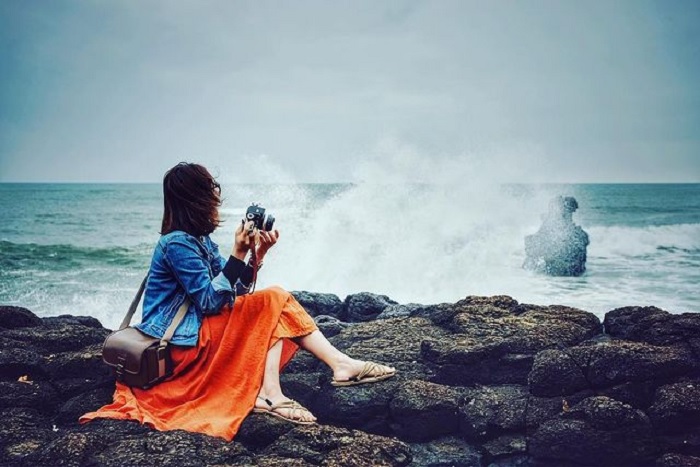 Or simply watch the sunset and put on a brilliant orange yellow shirt and watch the boats bobbing in the distance, along with the images of children playing innocently with the waves, will also make all your worries, your pressure washed away.

Besides, if you are a fan of experience, you can bring a tent and choose a convenient location on the rock for camping. At night, confide with your friends by the whispering waves, the next morning get up early to welcome the sparkling dawn on the sea, which will make you unforgettable for a lifetime. 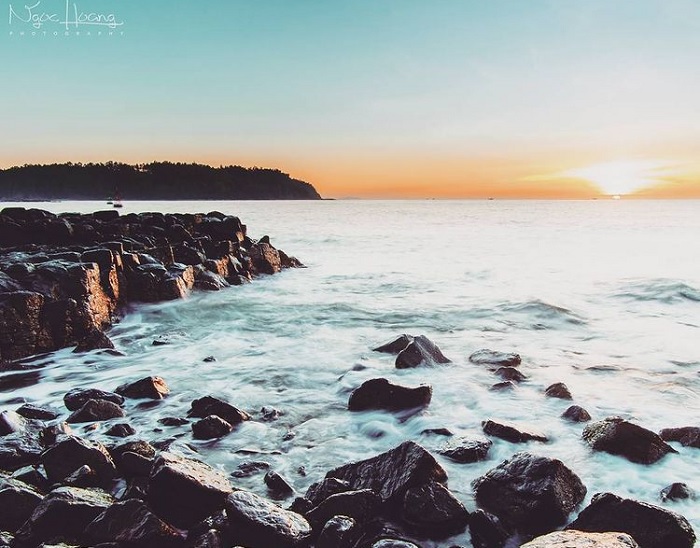 Wake up early to watch the sunrise (Photo @hongochoang)

In particular, the rocky cavities of Thach Ky Dieu Tau rock cliff not only have beauty effects, but also provide shelter and development for many types of seafood such as: Huynh De crab, sea nibs, sea snakes, sea eels. , crabs, fish species (mussel, è, hanh, persimmon …) and spinach … so, you will see a familiar image of diligent farmers crawling under the gongs, sitting on rocks to fish. or spread a net around there to catch fish, shrimp. 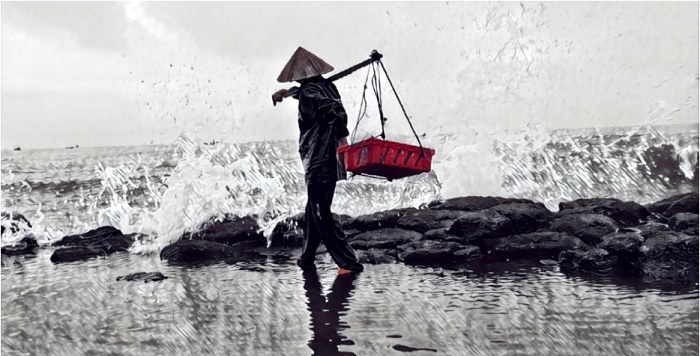 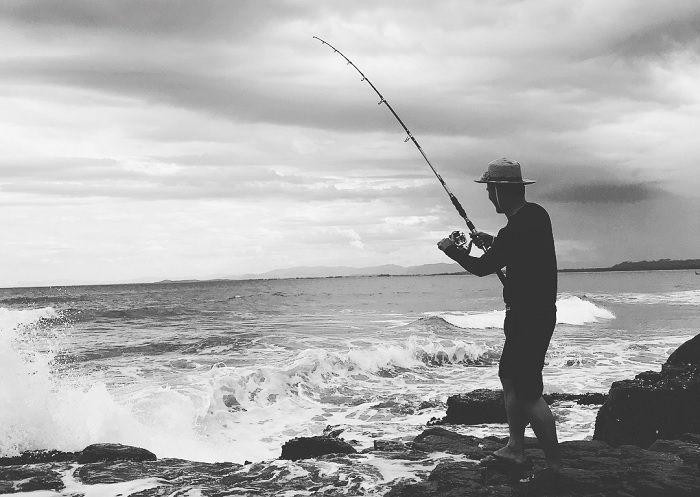 Fishing is also quite a fun experience (Photo @ picachu26061)

In addition, you can also visit the super beautiful tourist spots nearby such as: An Hai sa Ban, An Vinh muzzle, Sa Ky lighthouse, Sa Ky port, My Khe beach and Tinh Ky coconut forest … Sure surely will not disappoint you. 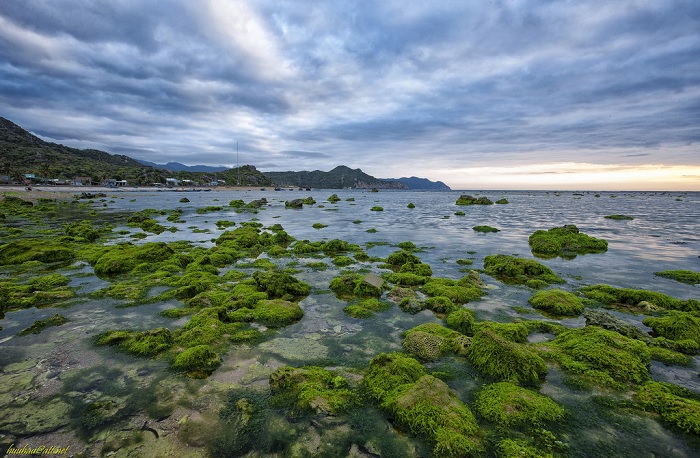 From the center of Quang Ngai city, you go east along Nguyen Nghiem street to go to Quang Trung street, after going through the roundabout, turn to the second entrance to Tra Khuc Bridge. After going to the end of the bridge, turn right onto Tran Van Tra street, continue to turn right at the Dien Co Quy Phat store and merge onto My Tra – My Khe Street. When going through the roundabout, turn to the 2nd exit and merge onto Highway 24B. At Toc Tien smoothie you turn right toward Khe Ky bridge. After getting off the bridge, meeting the first intersection, turn left and go along the sea to reach Thach Ky rocky cliff in Sa Ky beach .

Besides Ngoc Ly Son Island, Quang Ngai still has many beautiful landscapes, such as the rock cliffs of Thach Ky Dieu Tau, but if you do not explore, you will regret it.