Co Ha Garden is a place imprinted with the charming and unique beauty of the old Ngu Uyen garden with green space and many royal gardens located in the Hue Citadel.

Referring to Hue garden houses, people not only immediately think of An Hien or Kim Long garden houses, … but also think of the famous Ngu Uyen gardens in the past. Since the Nguyen Dynasty, the Hue capital used to have more than 30 gardens with many different names in the royal palace, special palace, seclusion palace, royal palace associated with each respective form. Among them, there are 5 famous royal gardens: Co Ha Vien, Hau Ho, Truong Ninh Cung, Ngu Vien and Thieu Phuong Vien. Compared to the other 4 gardens, Co Ha is the place that owns the most distinctive and impressive style. 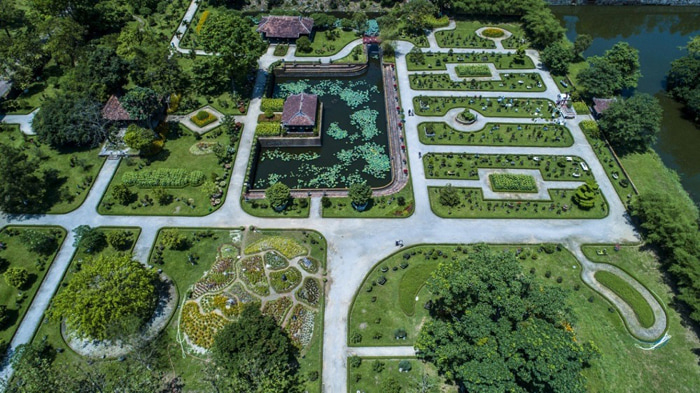 Where is Co Ha Garden located? 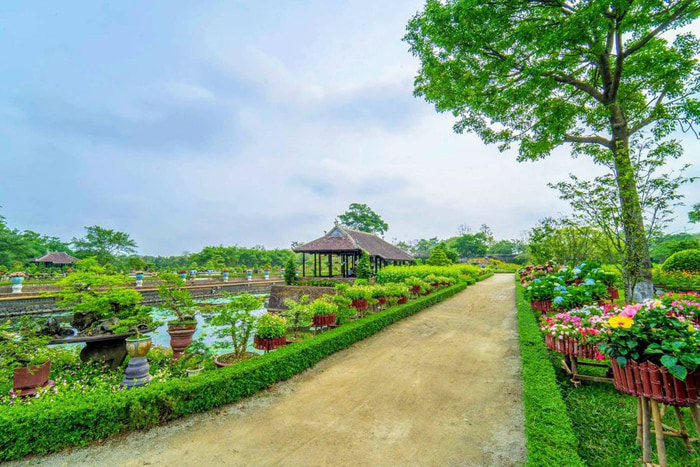 The garden is located in the northeast corner of Hue Citadel. Photo: vntrip

Currently, Co Ha Vien is located in Thuan Thanh ward, Hue city, Thua Thien-Hue province. Not only has a large area, nearly 5 acres (2.3ha), the garden is also considered a masterpiece of the royal garden because of the elaborate and delicate structure to the bonsai system. When it was newly built in the early 19th century, this place was considered as Co Ha street, which is the area for the Princes to study and play. It was not until 1837 that King Minh Mang changed it to a royal garden, and at the same time upgraded it to expand and plant more trees. However, it was not until the reign of King Thieu Tri (1841-1847) that the garden really took on “new clothes” and became famous for being built many other buildings such as communal houses, institutes, radios, and weights. The most iconic is the string of long-word-shaped long corridors surrounding the main buildings, best known as Tu Phuong Ninh Mat Hoi Lang. 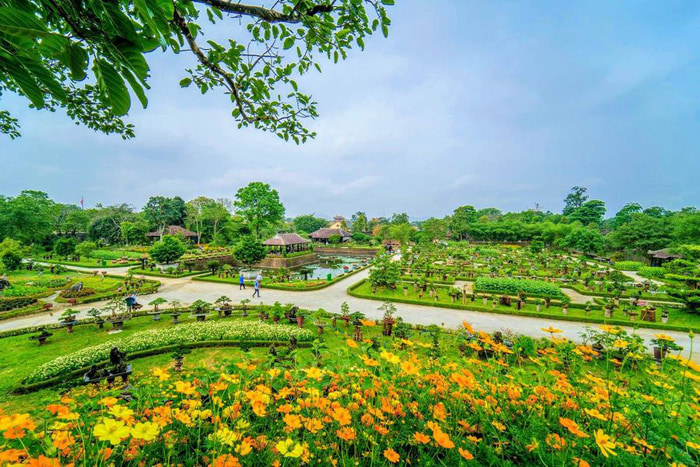 The meaning of the name of Co Ha garden

If you have the opportunity to travel to Hue and visit Co Ha Vien, you will be able to walk in one of the 5 most famous gardens of Hue Imperial City and be explained the meaning of the name of this place. Accordingly, the word Co Ha is taken from the idea of ​​”Van Co Thanh Ha”, which means leisure in various events. With this name, the Nguyen kings built the garden for the purpose of creating a place to rest, take a leisurely stroll in the middle of the royal palace, after many worries and busyness because of thousands of official affairs. Building a garden right in the palace is also because you don’t want to be too expensive and also convenient for moving from the inner palace.

Like most famous architectural works of Hue such as the Citadel, Tu Duc Tomb, Minh Mang Tomb ,… The House of Representatives consists of a complex of rivers, lakes, mountains, caves combined with a system of palaces and palaces. continuous electricity. Between the architectural works and the natural landscape, there is harmony and balance, creating a poetic softness. 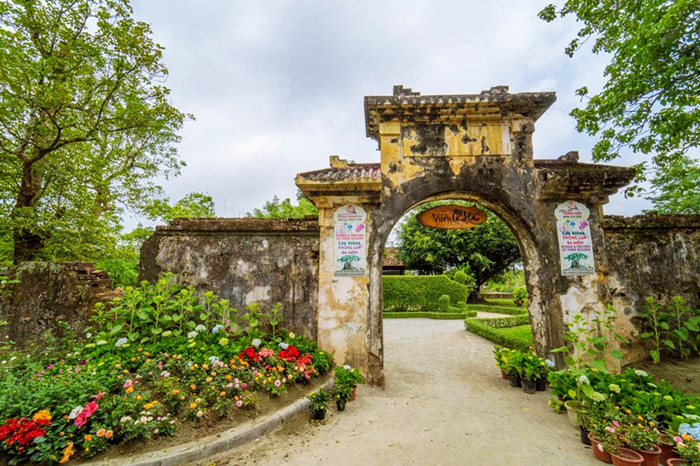 Besides, there is a lake called Minh Ho located in the middle of the garden with a small island in the center, on the island there is an attic called Quang Bieu. There is also a small bridge over it called Kim Nghe Ngoc Dong. On the left side of Minh Ho, there is a barbell called Hoa Phong, on the right is the Kha Nguyet corridor. The main gate of Ji Xia Garden faces south, commonly known as the Upper Gate. The East side of the garden has Minh Ly Thu Trai, the West is Nhat Than veranda. In addition, behind Minh Ho, there is a small floor called Thuong Thang, facing the North. 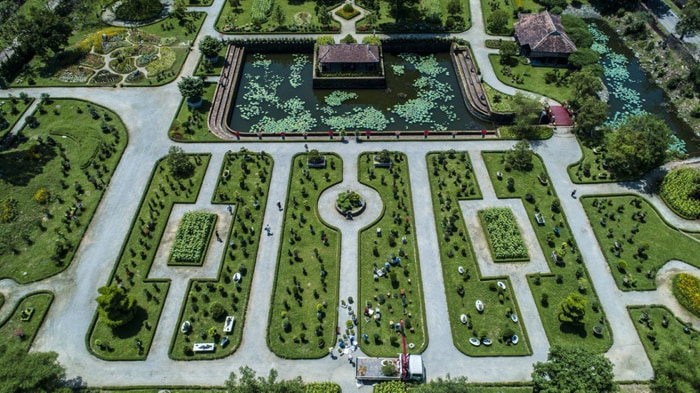 The main hall in Co Ha garden is called Kham Van palace with the hall called Minh Ly, roofed with golden glazed tiles. In addition, there are many other works in all directions. West of Minh Ho is Trai Vu River, Phuoc Duyen Cave and Dao Nguyen Cave. Leaning to the East is Kim Nghe Bridge with a roof above. From Thuong Thang floor, looking to the left is Tho Yen mountain, Trung Dinh mountain, Thuy Lien pond, Quan Tu mountain… 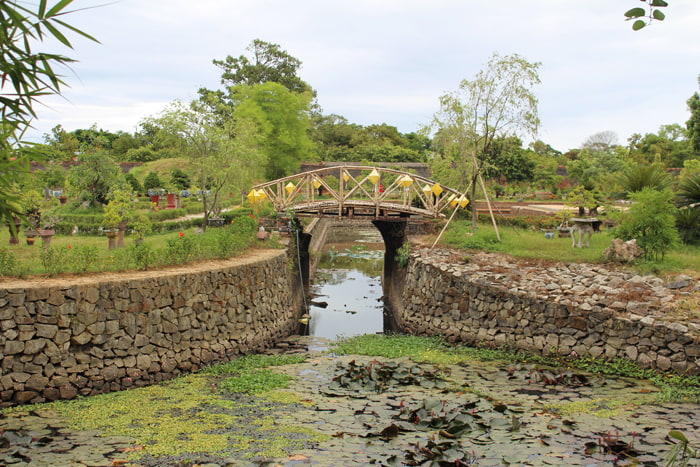 Kim Nghe Bridge is made of bamboo tied with rattan. Photo: traveloka

In the past, King Thieu Tri used to come to Co Ha and did an essay on this place with 14 different scenes, the most prominent of which are: Palace of opening ceremony, Palace of reward Bong Doanh, Minh Tu Mat, Lang episode. Quan Phuong, Vu Giang Thang Tich, Ho Tan Lieu Lang, Tien Dong Phuong Tung… To this day, these beautiful scenes are all painted by the king to draw mirrors and woodblock paintings to illustrate or engrave on stone stele. built in the garden. 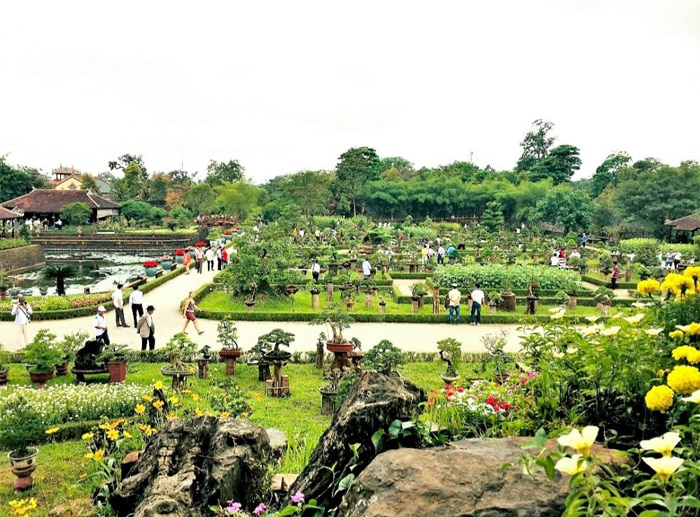 So elaborate and majestic, but at the beginning of the twentieth century, the Nguyen Dynasty gradually dismantled the main and secondary architectural works because they did not have enough conditions to take care of them. Since then, the magnificent, massive, and poetic Co Ha has gradually drifted into oblivion, then decayed and damaged most of the time. In 2013 – 2014, Co Ha Vien was renovated and expanded again. Along with traces of old caves, hills, rivers and lakes, the garden is also covered with green trees and precious flowers and ornamental plants. Especially in Hue Festival 2014, the garden has formed a special highlight, attracting a large number of tourists to visit and learn and enjoy the scenery. 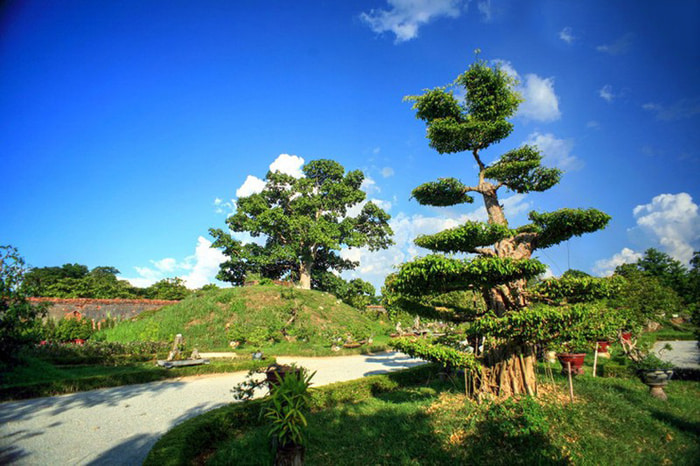 The garden is planted with many rare ornamental plants. Photo kienthuc

Co Ha Garden used to be the most beautiful royal garden of Hue Imperial Palace. Today, despite many changes and damage, there are still vestiges of the old garden with the shape of a river in the shape of mountains, floors, and weights. All evoke beautiful natural scenery in harmony with the architectural works of the ancient capital, especially the Citadel. Today, visiting Co Ha, you will feel the peaceful silence in the land of Than Kinh, hidden the poetic charm of an old garden as well as have the opportunity to discover more unique features of the art. Bonsai art from Hue, besides other famous Hue tourist destinations such as Thuy Xuan incense village or Hen dune, Thu Le ancient village. 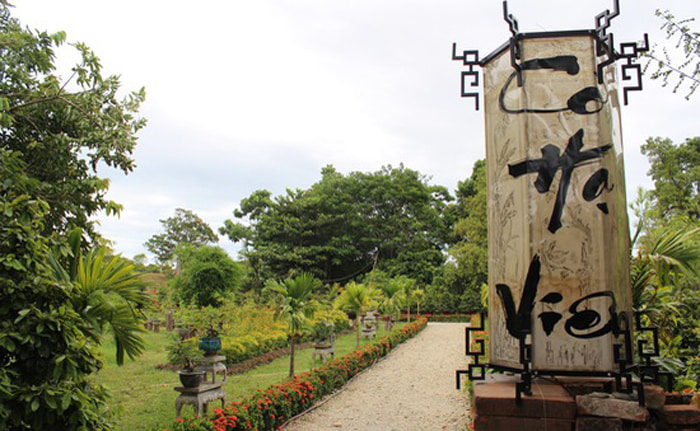 Co Ha is being embellished and restored. Photo: bazantravel

Come to Co Ha garden and see the beautiful flowers and plants, check-in the poetic lake, enjoy a moment of relaxation and peace at a virtual living spot in the famous Hue !