When it comes to craft beer bars in Ho Chi Minh, the good news is that you are seriously spoilt for choice. The craft brewing scene is really kicking off here, with more than a few must-visit spots. If you’re after a big night out on the town or just a quiet drink on the way home? We’ve got you covered when it comes to craft brews.

From high-end restaurants to bars specializing in tasty beers and local breweries, the craft revolution has been taking the city storm.

So, grab a couple of friends, make your plans for the evening, and get stuck into some of the best craft beer in Saigon…

What many travellers don’t know is that Ho Chi Minh City also has a thriving craft beer culture that rivals any major city in the world.

Saigon’s love for craft beer has been driven in part by a large number of expats who have relocated to the metropolis for its year-round warm weather and low cost of living.
For craft beer lovers, the city offers a chance to sample some exotic flavours (think dragon fruit, beetroot, and passionfruit) in large, modern, lively tasting rooms.

If you are planning to visit Bangkok, the capital of Thailand on your trip around South East Asia, click here to read where to try local craft beer in Bangkok.

The craft beer scene in Ho Chi Minh City is growing so quickly that it’s easy to feel overwhelmed with all the choices. Here are some locally brewed Vietnamese craft beers that will appeal to both rookies and experienced guzzlers alike:

Rooster Beer IPA: Best known for their blonde and dark craft beers, the IPA from Rooster is very drinkable with clean, crisp notes and no wacky flavours.

During my first trip to Vietnam and Ho Chi Minh back in 2011 was the only local beers you could find, Saigon Beer or 333 and the number of craft beers breweries in the city was precisely Zero.
But now in 2019 and my second trip to Vietnam did it seem like every street had its own Microbrewery around Ho Chi Minh city,  making the city a must-visit city in Asia for craft beer lovers.

American run and owned brewery by Sean from Portland with over 20years of crafting beer.
Unlike most craft beer pubs in town that tend to be small and intimate, East West Brewing Company features a large beer hall and some of the best local craft beers in Ho Chi Minh City.
There are eight brews on the menu, all made on-site in the big tanks behind the bar.

Try their coffee-vanilla porter or low-alcohol-content fruit-flavoured beer. East-West also offers a tour around their brewery from the beginning of their brewing process to the beer is ready to get served.

Wall paint in one of the local craft beer places.

Away from the frenetic energy of downtown Saigon, Lac Brewing Co. in District 7 is the place to chug a cold one in peace. Popular with residents as well as visitors to Saigon, this craft beer bar has a chilled vibe, minimalist décor, and soft music that encourages conversation. Featuring a lovely outdoor patio free from traffic noise, the bar has friendly staff who can help novice beer drinkers make a choice.
169/7 Nguyen Duc Canh, District 7.

This contemporary bar, popular with tourists and expats, is an amazing place to drink locally made beer here in Ho Chi Minh City. Prices are on par with most joints in town. The options are endless with more than 50 brews on tap. Get a table on the massive, airy terrace for a relaxed night out.

Probably the cutest craft beer place in Ho Chi Minh city, small and cosy bar in Discrit one on a rooftop and happy hour. Has a great selection of exotic craft beer, what about a Lemon Grass IPA? Or a beer with Dragon fruit taste.

The cute inside of Winking Seal.

Some of the exotic beer, lemongrass or dragon fruit?

Located in downtown Saigon, Malt has a constantly evolving menu of foreign and local craft beers. Ideal for a fun evening with a refreshing line-up of beers, friendly service, a lovely open-air patio, and entertainment options such as shuffleboard and dartboards.

Boasting of a rooftop bar with enviable views, Rogue Saigon is a trendy pub in Saigon city center. Pair your craft beer with an artisanal burger from the extensive food menu. This beer bar hosts fun competitions and music trivia nights, making it a great place for a night out with friends.

Located in the heart of Saigon’s backpacker area, Ong Cao caters to budget-conscious tourists with daily discounts on various beers. Step in for a selection of locally brewed craft beers and sip a cold one as you watch the world go by.

To hang out with the hip crowd, head to the ruin pub Nong Trai Khoai where they serve some of the best craft beer in Saigon. Choose between internationally renowned names and local home brews. There’s also a good selection of western and Vietnamese food.

Credited with changing Saigon’s drinking scene, Pasteur Street offers a range of craft beers with Vietnamese flavours. This award-winning brewery has a casual atmosphere and is the ideal place to sample some of the best craft beer in Ho Chi Minh City. 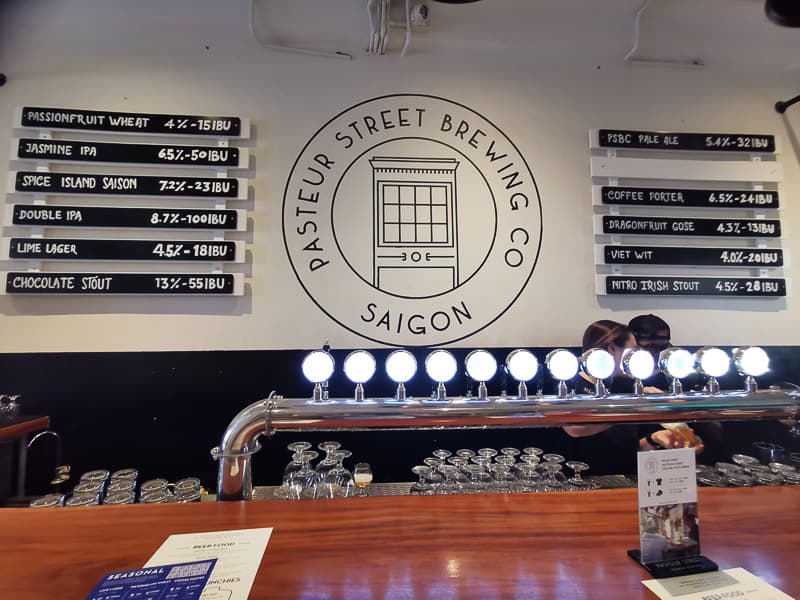 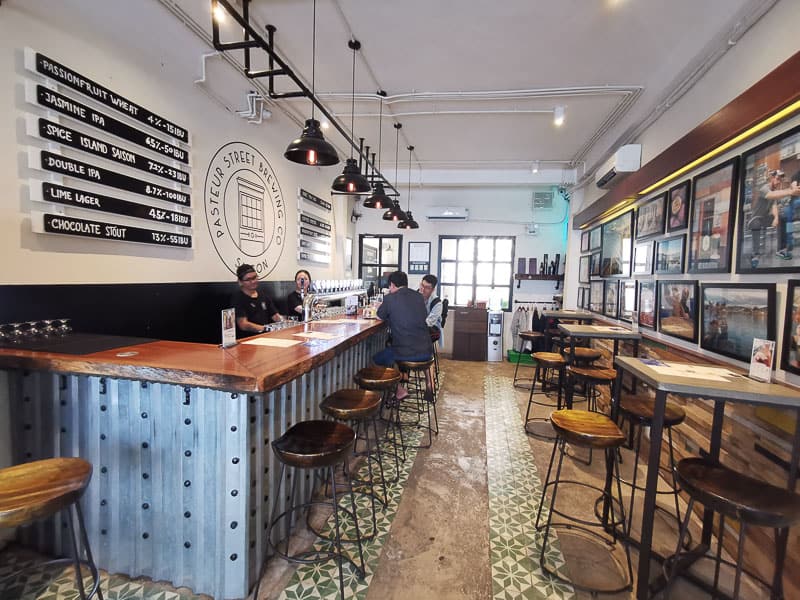 Very quickly after opening in 2016, Heart of Darkness became a favourite with craft beer aficionados in Ho Chi Minh City, offering everything from light and crisp IPAs to rich and creamy stouts. The bar has several locations in Saigon, but the one in District 1 is by far the most popular.

Different beers on taps at the heart of darkness.

The Outside seating area at Heart Of Darkness

When you’re in Vietnam, Saigon Red and 333 don’t have to be your only choice for local beers. There’s a craft beer boom that is gaining steam and more than a dozen brewers are making local craft beers in Saigon. Ho Chi Minh City is the best place to try something new from a bevvy of options.

If you want to experience the boutique beer scene in Saigon with a local expert, there are beer tours where you’ll have the chance to learn, taste, and visit some of the best places to enjoy craft beer in Ho Chi Minh City.