Along with the tombs of Minh Mang, Tu Duc, Khai Dinh, … Dong Khanh Tomb, also known as Tu Lang, is known as one of the seven most beautiful mausoleums in the ancient capital of Hue.

The tomb of King Dong Khanh is an ancient work – an important work in the complex of Hue relics, located between the two tombs of Thieu Tri and Tu Duc. The mausoleum of the 9th king of the Nguyen Dynasty is located in the middle of the quiet countryside, in the territory of Cu Si village, Duong Xuan canton, today is Thuong Hai village, Thuy Xuan commune, Hue city.

Tu Lang – the resting place of King Dong Khanh was recognized by UNESCO as a world cultural heritage on December 11, 1993. 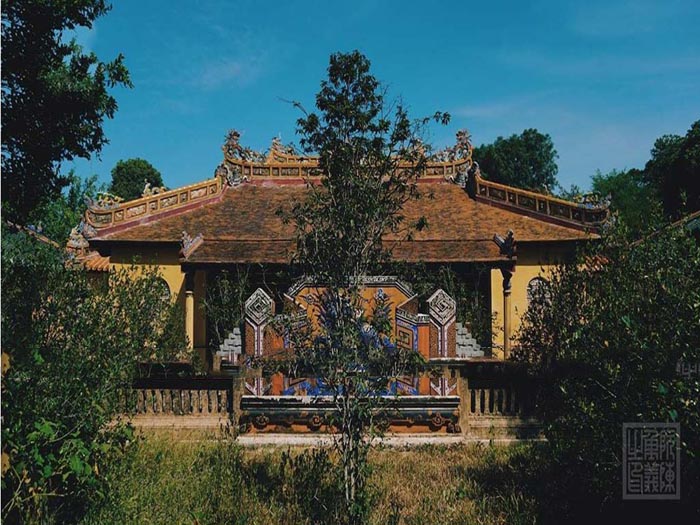 The tomb of King Dong Khanh is located between the tombs of Thieu Tri and Tu Duc. Photo: smiletravel 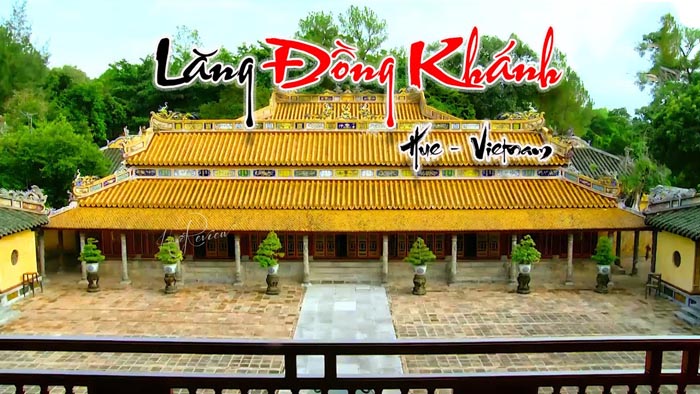 The resting place of King Dong Khanh is not too lonely. Photo: Vntrip

The path leading to the mausoleum of the 9th king of the Nguyen Dynasty is quite easy to go, especially for the first time visiting Hue. Whether you choose to rent a car, take a taxi or drive yourself, it will be easy to find your way. Here are detailed instructions:

Departing from Hue railway station , visitors keep going in the direction of Bui Thi Xuan street, then turn to Huyen Tran Cong Chua street. From here you will see Tu Duc Tomb. Remember to take the time to visit. Then continue to go for more than 100m, pay attention to the left-hand direction, you will see a sign indicating the way to the tomb of King Dong Khanh. Although the board is currently a bit blurry and difficult to read, but with a little attention you will easily recognize it. 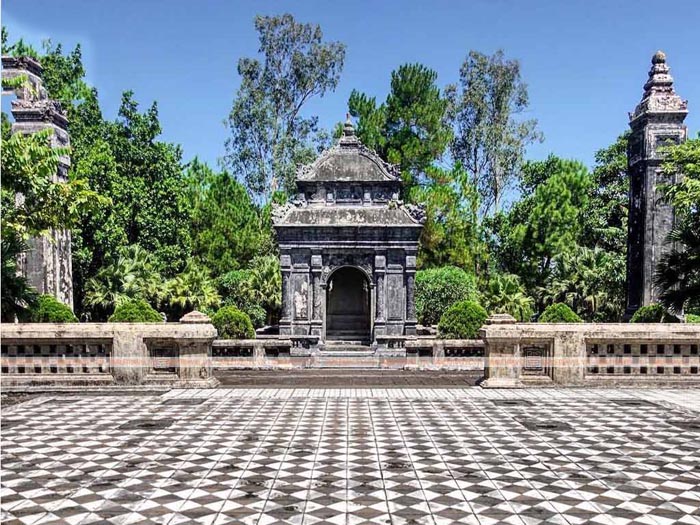 It is easy to recognize the tomb of King Dong Khanh. Photo: smiletravel

If asked which season is the most beautiful and convenient to travel to Hue , many tourists will answer that it is around the beginning of the year, from January to April. At this time, the weather in the central region is quite pleasant, no longer It is an extremely suitable time for tourists to visit the Imperial Citadel – Hue Citadel, the mausoleums, Thien Mu Pagoda as well as other famous tourist attractions in the city. ancient capital. 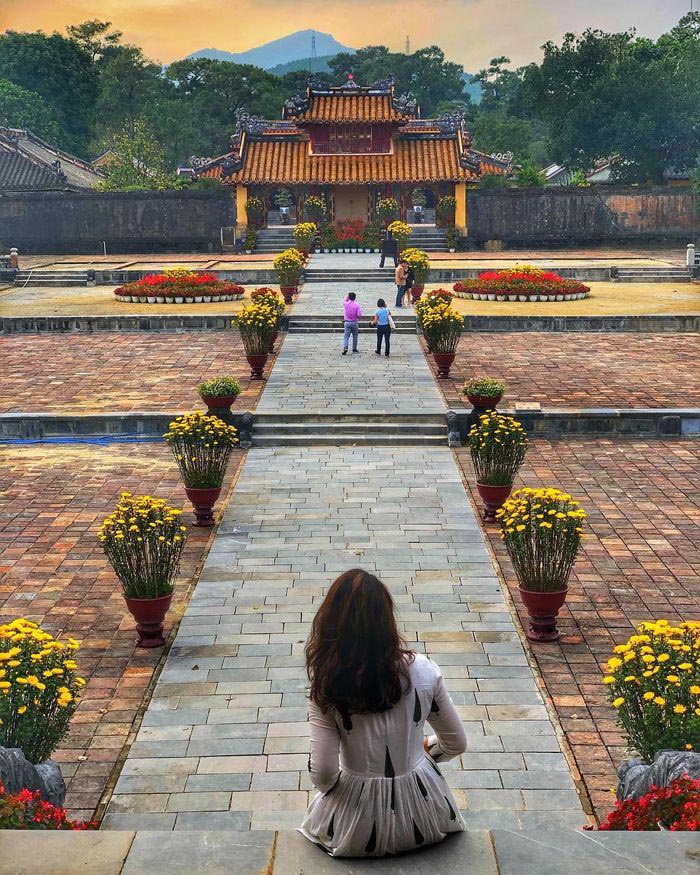 It is recommended to visit in January and February every year. Photo: Bazantravel

– Currently, the latest updated ticket prices of the mausoleum:

– Visiting time: The tomb of King Dong Khanh is open to welcome guests on all days of the week, from Monday to Sunday (time frame from 7am to 17h30).

King Dong Khanh, alias Nguyen Phuc Ung Thi, ascended the throne and took the name, Nguyen Phuc Bien. He was formerly the adopted son of King Tu Duc, in office from 1885 to 1889, the ninth emperor of the Nguyen Dynasty in Vietnamese history.

When the king died at the age of 25, he still did not have time to build his tomb. Therefore, when King Thanh Thai succeeded to the throne, he used the previously unfinished palace to worship his father Dong Khanh and chose land in the southwest, about 100 meters away, to bury him. 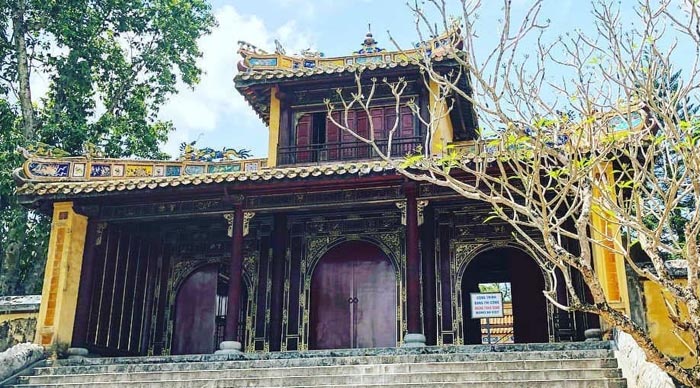 However, most of the architectural works in the current Dong Khanh mausoleum were built under the reign of King Khai Dinh. Specifically, after being crowned for 3 months, King Khai Dinh assigned the Ministry of Public Affairs to take care of the repair of the mausoleum, including Bai Dinh, two rows of statues, martial officers and elephants and horses, the work of paving bricks to keep the courtyard or building orchids. around and set up Nghi Mon gate in front of the mausoleum. Next, works such as Thanh stone stele erected in Bi Dinh, Ngung Hy palace and the area of ​​houses dependent on the project were also restored.

In summary, the construction, repair and construction of new works in the tomb of King Dong Khanh lasted for 35 years and experienced 4 different kings, from the reign of Dong Khanh, Thanh Thai, Duy Tan to Khai. Dinh. The harmonious ancient architecture of Dong Khanh Tomb of Hue

Experiencing a long construction process in a complicated and confusing historical situation, the structure and architectural elements of Dong Khanh’s mausoleum were also significantly affected. The most noticeable thing is that the building no longer carries pure traditional art but has many new features, mixed with Western architectural values. The process of building the tomb of King Dong Khanh is quite complicated. Photo khamphahue

Regarding the general architectural model, the tomb of King Dong Khanh is no different from the tombs of previous Nguyen kings such as Minh Mang and Tu Duc tombs . Regarding the main structure, in both the mausoleum and the mausoleum, there are about 20 large and small works with relatively dense density. The king’s mausoleum turns to the East – Southeast, taking Thien Thai mountain, Thien An hill about 3 km away as a criminal case, right in front of it, a semicircular pond is dug to form the “intelligence” element. 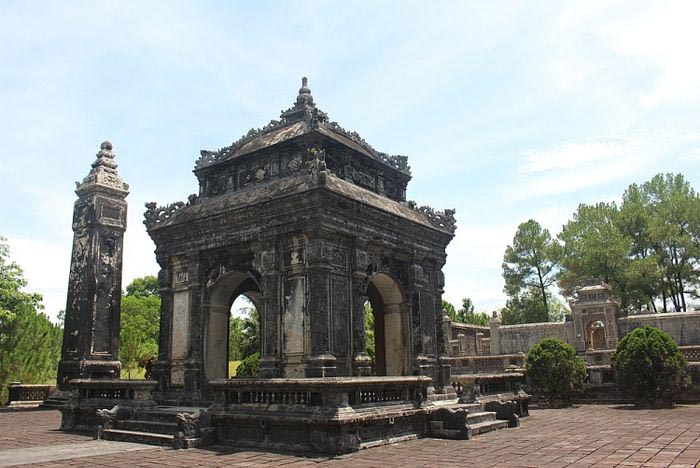 The main work of high value and most prominent in terms of architecture, painting and decoration in Dong Khanh mausoleum is the Ngung Hy palace. Initially, this place was a double building built in the general style of the traditional Hue palace, but the difference was that the latter part was added a third house, the rear house. The entire electrical area has three truss systems, which are joined together in the shape of a “triangle”, with two more gutter systems in the middle. 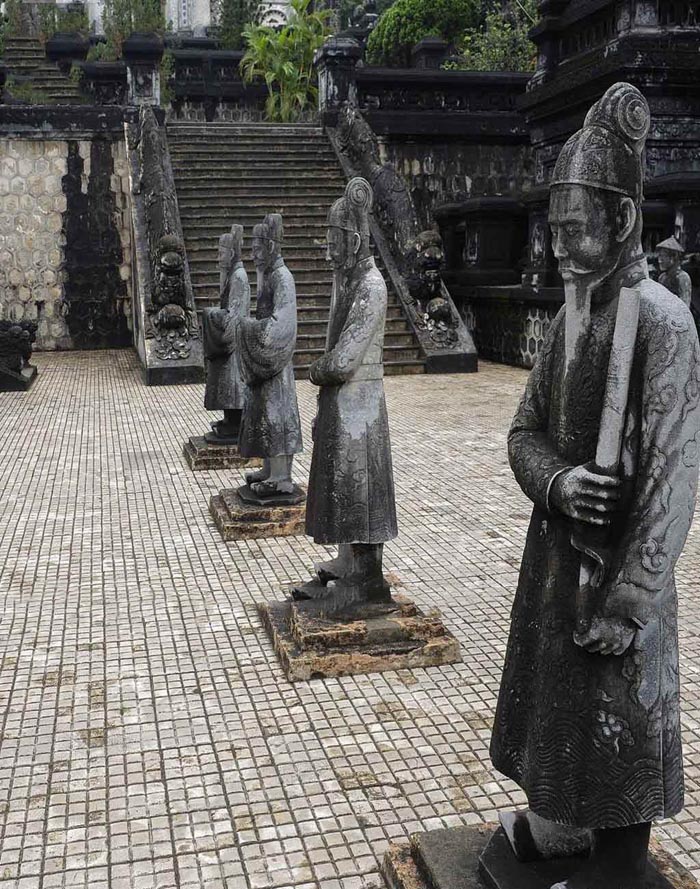 The mausoleum was built in a transitional period of history, so Asian architecture. Photo: smiletravel

The interior of the palace is decorated with magnificent golden carvings, decorated with hundreds of pictures and verses, panels and a system of three puzzles. There are also many unique decorative images depicting the scenes of the 24 stories in the “two decades of filial piety”. It can be said that Ngung Hy Palace is the best place to preserve the traditional lacquer art of the nation, is one of the four  most beautiful mausoleums in Hue using embossed images of colored glazed terracotta in exterior decoration. Through many rainy seasons, Hue still retains its beautiful durability. This is the opening mausoleum for the blending of two Asian-European art architectures, which later, Khai Dinh Tomb has inherited and successfully promoted this new and old beauty. 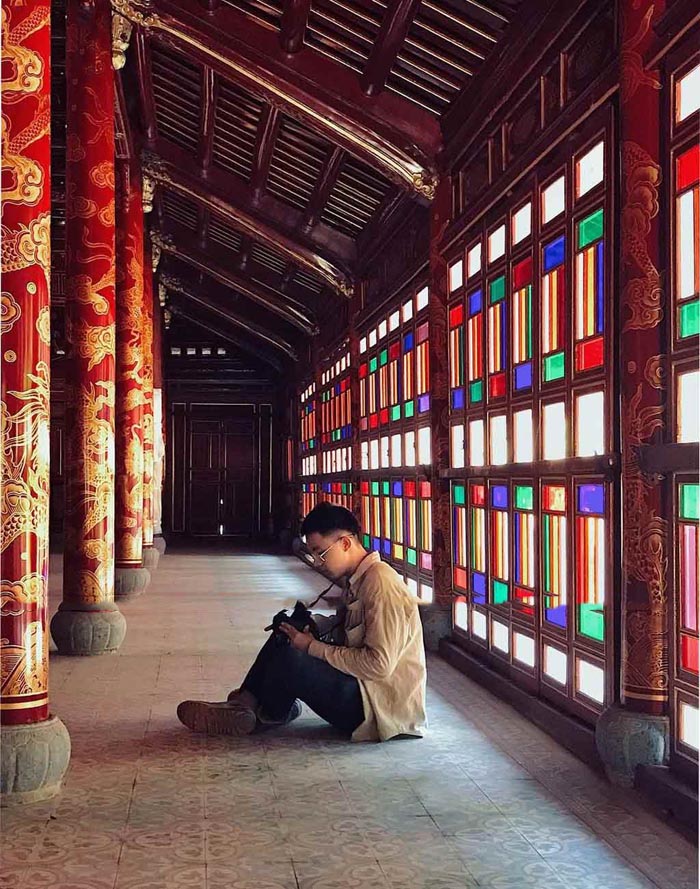 In particular, this work of the mausoleum of the Nguyen Dynasty retains a rare Asian feature. It is the screen in front of the tomb showing the longevity of the King, considered as compensation for the short series of days in the throne of King Dong Khanh. Right behind the mausoleum, there are two carp built of cement, new material from France, above there are two dragons worshiping the sun, representing the carp crossing the dance floor to turn into a dragon. If the main hall has a traditional style, on the contrary, the tomb architecture is almost completely Westernized. This is most evident in decorative motifs and building materials. It is a row of front mandarins covered with lime brick with a tall but thin figure, different from the stone-carved statue at Tu Duc mausoleum following the traditional way with a rather short body. It is also a communal house, influenced by European and Asian architecture, using bricks instead of stone statues, using ardoise tiles for roofs instead of royal tiles, lined with checkered bricks instead of bowl bricks. colon,… 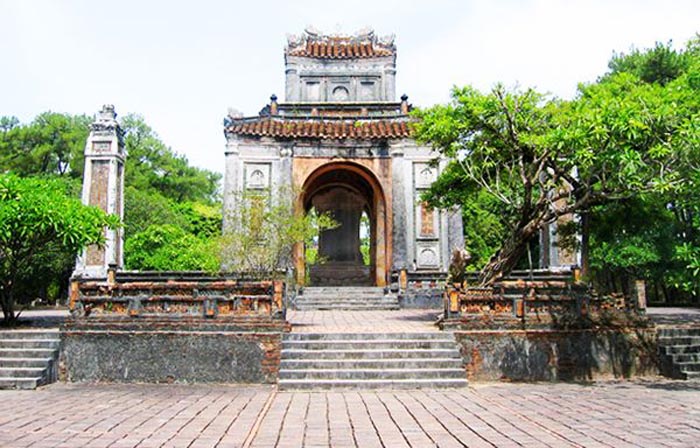 It can be said that King Dong Khanh’s mausoleum is a creative and experimental work at the beginning of the era of modern architecture imported from the West. The mausoleum of the ninth king of the Nguyen Dynasty has a special blend of classical and modern styles. Some decorative details also brought popular elements into the art of palace construction. All make the architecture relatively harmonious with the surrounding rural landscape, besides the traditional construction.

If you have the opportunity to travel to Hue, remember to take the time to visit and learn, check-in at Dong Khanh mausoleum with this unique harmony and ancient beauty!