There is nothing more attractive in this late summer and early autumn days than a trip to Tien Phuoc tourist destination in Quang Nam with beautiful roads and enchanting stops.

Tien Phuoc is a semi-mountainous midland district with a variety of climates, soils, and people in Quang Nam. This place is known as a place of “blessed fairyland” with all kinds of different terrains such as soaring hills and terraced fields in the Northwest, scenery of Northern countryside and South Central rivers and streams, and gardens. fruit-bearing bold southern imprints,… All have created an irresistible attraction and attraction for any visitor. 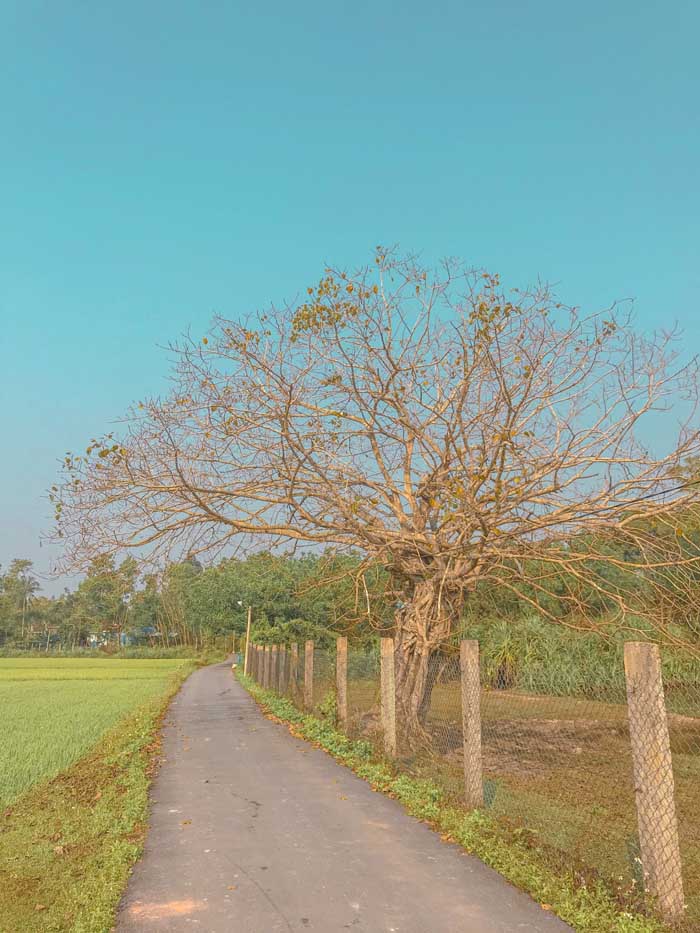 Lonely tree on the way to Tien Phuoc. Photo: gody.vn

To get to this land known as the fairyland of this world, you can choose to depart from Chu Lai airport of Quang Nam province or depart from the direction of Hoi An or Da Nang ancient town. Just come and take the bus from Tam Ky city and change the bus to go to Tien Ky town. Then you rent a motorbike or choose a bicycle for yourself and freely start your journey to visit the places of the “fairies” in the Tien Phuoc district. 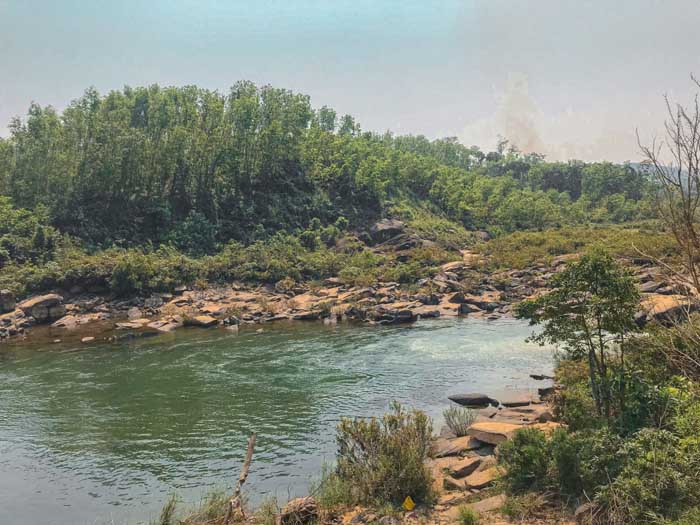 Legend of the name Tien Phuoc

If you have the opportunity to travel to Quang Nam and visit Tien Phuoc, you will hear many legends about this poetic land. Local people also call Tien Phuoc the “Thirteen Fairy Sa” area because this place is associated with a story told with fairy colors from the pink and wild era. Legend has it that the fairies used to ask permission of the Jade Emperor to come here to travel and have fun because of the beautiful scenery. The girls loved the scenery of the lower world with all kinds of fun, so until now, they still did not want to leave but found a way to stay, despite being reminded many times. Therefore, the Jade Emperor was angry, but he did not punish them severely but allowed them to come down and stay. Since then, the place where the fairies stayed is called Tien Phuoc until now. 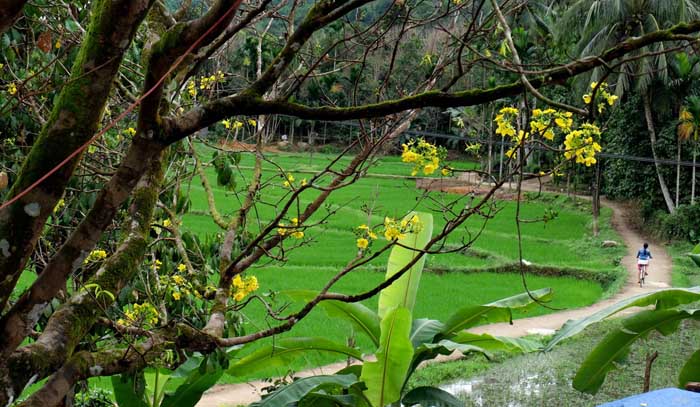 Because each fairy has a unique beauty and talent, each region has its own unique and attractive features, associated with impressive Tien Phuoc tourist attractions. Join LuhanhVietNam to discover each place where fairies live in this famous tourist destination of Quang Nam. 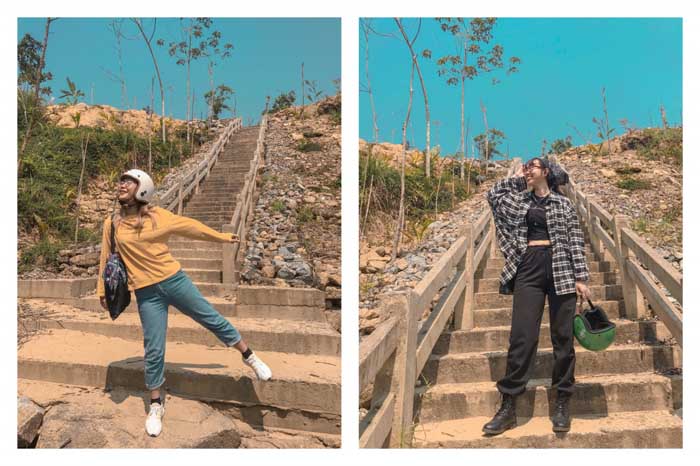 In the list of tourist attractions in Quang Nam , Tien Phuoc with 15 places with the word “Fairy” at the top is known as the “Five Decades” – “Fairy” is also beautiful. This place has a winding river from East to West and still retains the wild and dreamy features, both Fairy Stream, 7-storey waterfall worthy of the name of the land of water, and picturesque rocky beaches. And there is no shortage of beautiful mountains forming all sorts of feng shui positions such as “Huu dragon, left white tiger”, “Two dragons fighting for pearl”, “Quan Tien Hoi” or “Long adoration, tiger dress”,… 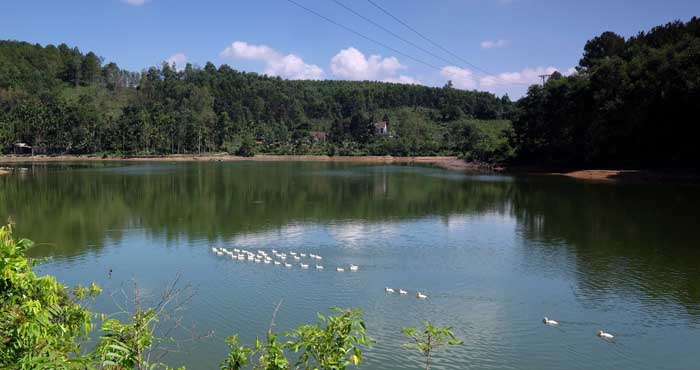 In addition, in Tien Phuoc, there is also the famous Tien An bat cave, which is considered as a miniature copy of “Jurassic park”. Not to mention many interesting places associated with many ancient stories and mysterious legends of local people such as Tien pond in Tien Ky also known as Ho Quon with green pine and purple color of myrtle and flowers. shore. 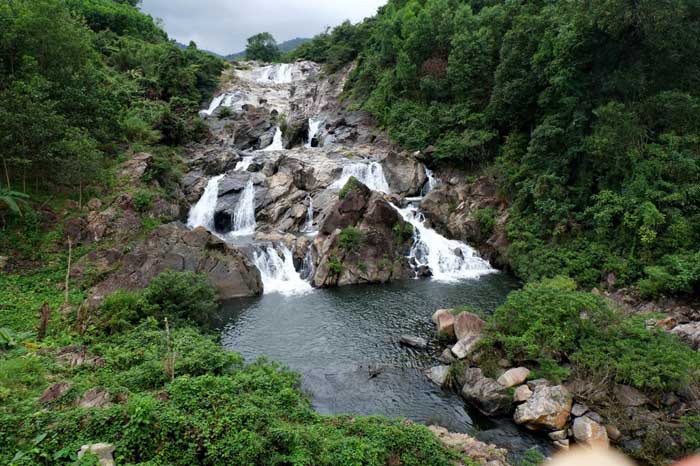 It is also O O Waterfall, also known as Fairy Waterfall, and rocky beaches of all shapes and sizes. Then there are many famous rocky beaches and beaches in and out of Quang Nam such as King rock beach, Lo Thung beach, the giant fish Nien petrified when crossing the dance floor, … These are also Southern fruit gardens. The set grows all kinds of specialty trees such as coconut, durian, mangosteen, sapoche, … delighting tourists near and far. Here are the details of each of Tien Phuoc’s most famous destinations:

Tien An Bat Cave is known as a miniature ‘Jurassic park’ in Quang Nam. This place includes a cluster of small caves deep in the forest in the Tien Phuoc district. The cave was formed millions of years ago with populations of limestone caves called Upper and Lower Caves. Each cave has its own entrance and is zigzag hundreds of meters deep. Recently, the bat cave is a well-known destination and attracts tourists from near and far to visit and explore even though the way is not easy at all. Visitors have to go short distances and ask locals while walking to be able to go to the right place. But in return for the difficult journey, you will admire the mysterious and wild Tien Phuoc tourist destination like being lost in the land of the ancient past. 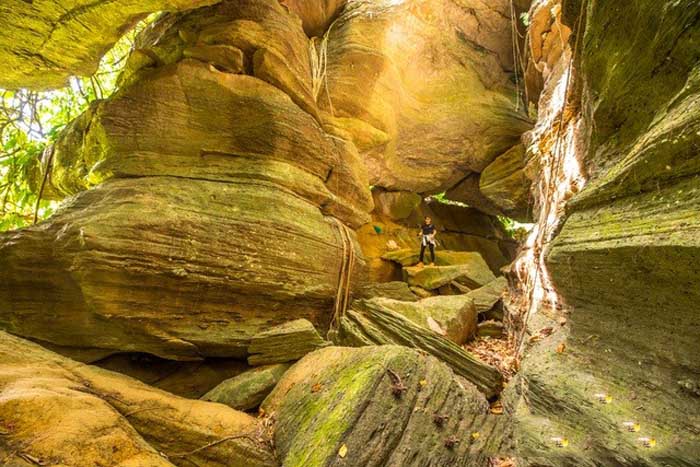 Loc Yen Co Village is also on the list of unique Tien Phuoc tourist attractions because there are more than 20 ancient houses dating from 100 to 150 years. Ancient and rustic features are present in each road, stone slab. Currently, this is a potential tourist destination in Quang Nam and attracts many tourists because of its nostalgic beauty and meticulous care by locals. Coming to Tien Phuoc, you will have the opportunity to admire the unique architecture of ancient houses and the wonderful sculptural art of the forefathers shown through each ancient house, each fence is built of stone, skillfully arranged stones. The rock climbs higher without falling and remains firm over the years. 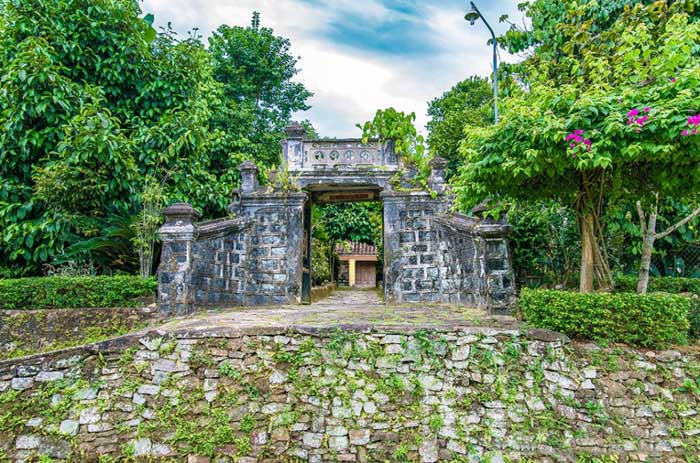 If you like to experience the culture and life of the local midland region, you can choose to stay at a homestay and send some money to help them cook. It will be an interesting activity so don’t miss it. What is more attractive than walking in the middle of a peaceful ancient village listening to the whispering grass and trees, being told ancient legendary stories, amidst the scent of rice and then sleeping overnight in a small house with a country style.

Quang Nam has not only a famous Hoi An ancient town at home and abroad, but also Hoi An ancient village in Tien Chau, Tien Phuoc district with a population of ground houses, tiled roofs and garden houses that are almost intact. 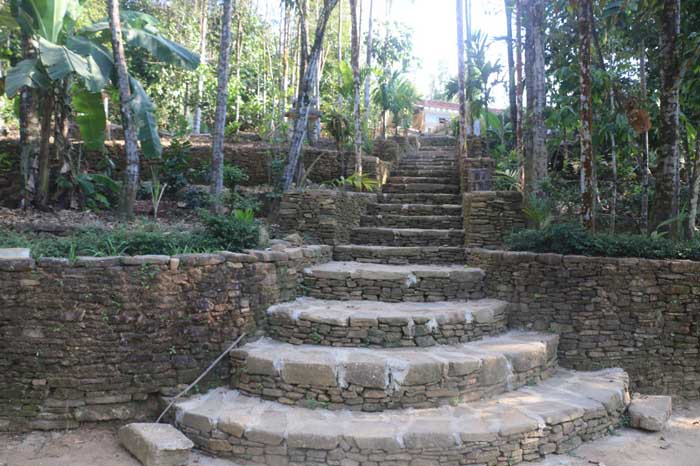 The entrance to the house is like a maze. Photo: NVM

4. The system of stone walls and ancient village roads

Although it is a midland area with most of the barren land, full of rocks, people still work hard to collect stones, decanter alluvial soil to build houses, build fences and build village roads that are both beautiful and unique. maze. The top of each wall is also beautifully decorated with rows of Chinese tea, around the base of the tree is added small stones to prevent weeds from growing and keep the soil moisture.

The most remarkable thing is the stone fence that stretches for tens of kilometers, the result of the labor of several hundred households living in the ancient villages of Tien Phuoc. From a distance, the fences and village roads look like thin, winding silk strips showing off the green color, the scent of seasonal fruit trees is extremely attractive. 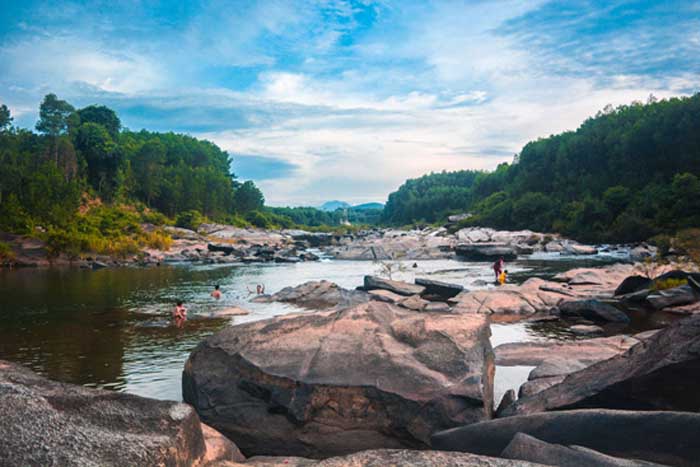 Among the famous Tien Phuoc tourist spots, it is impossible not to mention the beautiful Lo Thung rock beach. This is the ideal address for those who love camping and picnic activities on the weekend amidst the vast open space of the mountains. 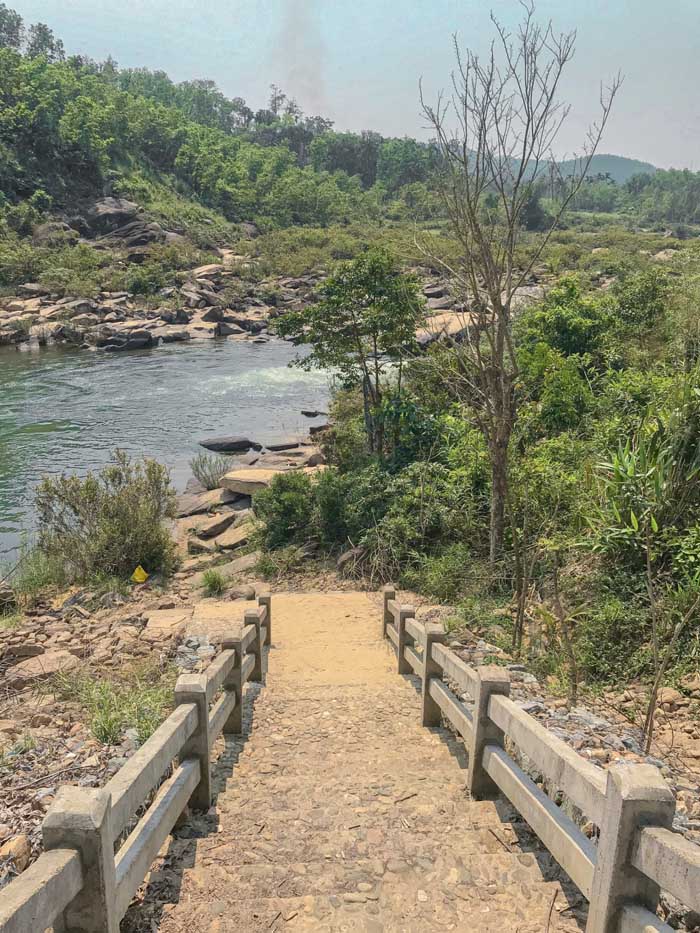 The road goes down to Lo Thung rock. Photo: Gody.vn

Located not far from Lo Thung rock beach, it means that visitors only need to go a short distance to reach a place with a pretty good suspension bridge. Don’t be afraid to cross the bridge to experience both fear and trembling, (actually the bridge is very solid and safe) and take pictures to check-in, it will be very new and interesting. 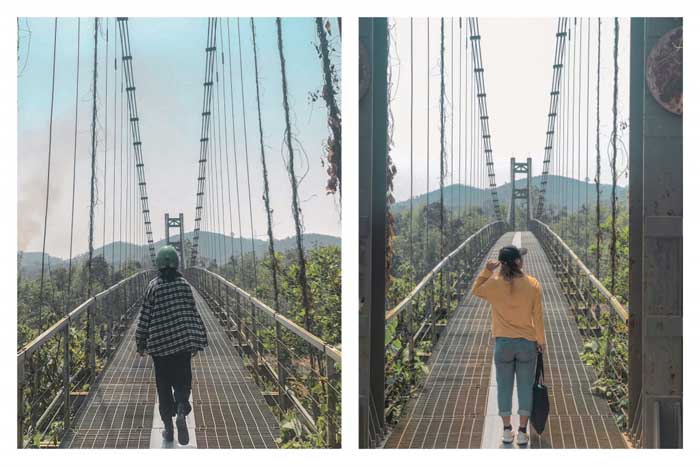 The scene is so chill. Photo: Ngo Hue Chi – Gody.vn

With the above Tien Phuoc travel experiences, hope you will have a fun and interesting trip. Do not miss the opportunity to travel to Quang Nam and check in the land the fairies choose to be this ‘lower’ place!