Vung Tau not only has Nghinh Phong cape or the poetic Pig hill but also the pristine, clear, and charming Hon Ba island that makes visitors fall in love with “forgetting the way back”.

Hon Ba or Hon Mieu Ba is a small rocky island with an area of ​​​​about 5,450m2, about 200m from the foot of Nho mountain and near Nghinh Phong Cape, in the territory of Back Beach, Vung Tau city. 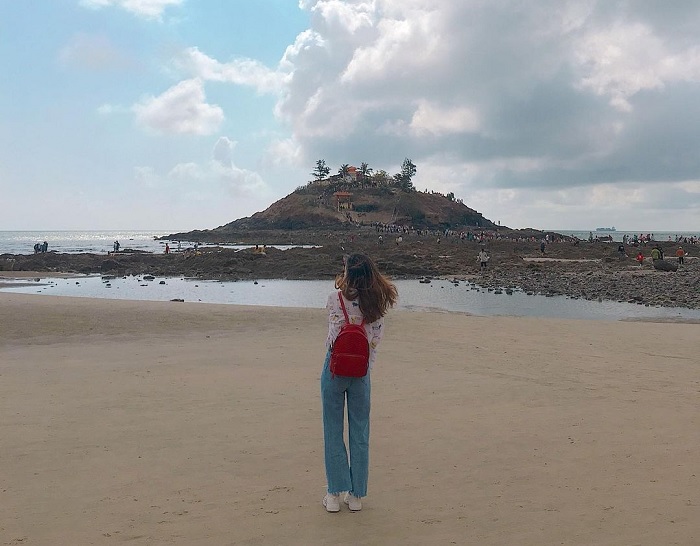 It is known that during the French colonial period, an officer named Archinard shot 3 bullets on this island, so it is also known as Archinard island or Ba Vien island, but because there are outstanding works on the island. Especially Ba Temple, local people still use the familiar name is Hon Ba.

In the record of many documents, this island was first discovered in 1915 by Dr. Yersin. Accordingly, when he was looking for a cure for malaria, he discovered that the climate on the island was quite cool, similar to that of Da Lat, suitable for growing Canhkina – the raw material for the preparation of Ky Ninh medicine to treat malaria. He built a house on it to take care of the trees.

Today, Ba Bai Sau islet, although still unspoiled, has been known by quite a few people and has become a must-see tourist destination in Vung Tau, especially for pilgrims and those who are passionate about discovering new things. new. 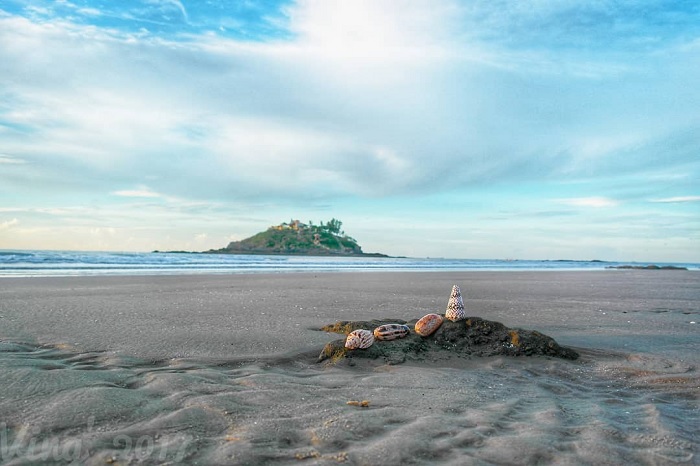 Ba Vung Tau island is a perfect combination of rock and sea and is covered with countless vibrant trees such as coconut, poplar, areca or porcelain flowers, so they all wear a shirt all year round. Cool green color, beautiful and attractive to people. From a distance, it looks like a giant salamander sleeping lazily in the middle of the ocean. 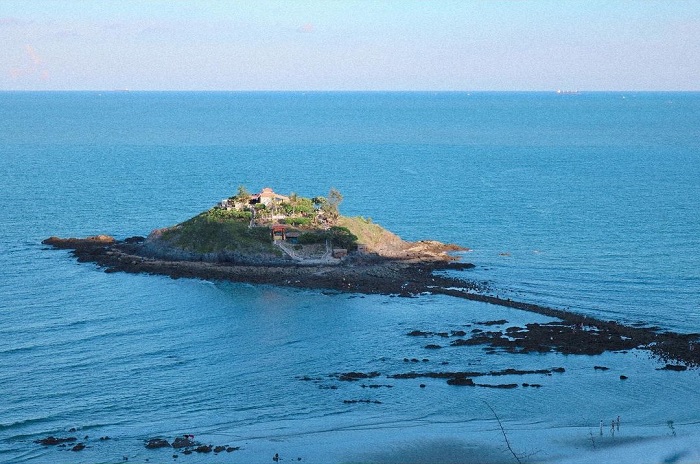 The closer you get to the island, the more attractive the island becomes with rocks of all sizes with many fancy shapes lying crowded, overlapping, in the middle is the white Da John stream, whispering and wriggling through the crevices. Rocks form a mellow love song and are surrounded by clear, emerald-green seawater, sometimes there are waves crashing on the shore, sending white foam, so beautiful that you can’t take your eyes off. 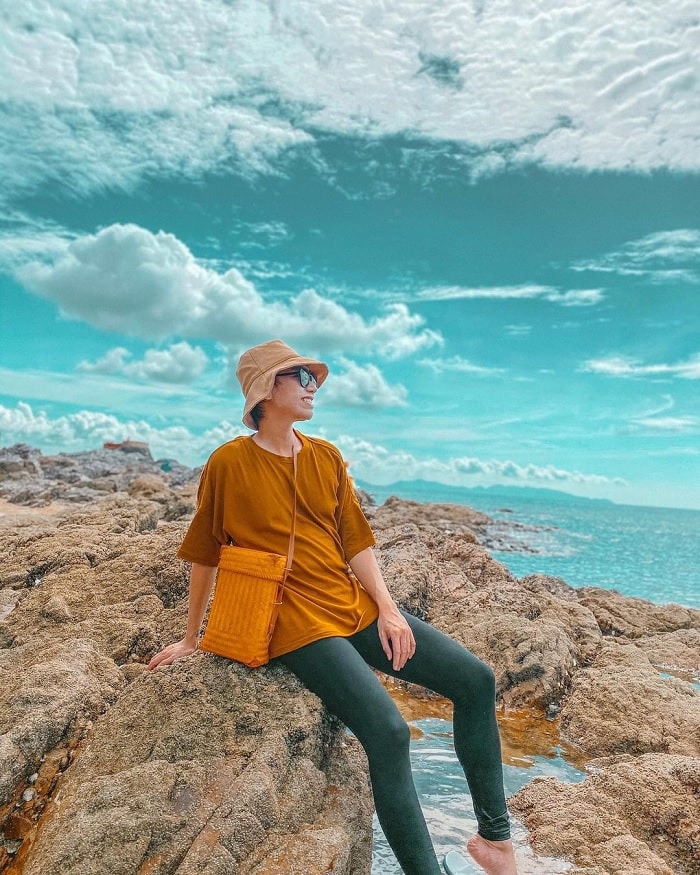 In particular, each time Ba island in Vung Tau brings a different attraction: at dawn, the gentle rays of the sun paint a shimmering picture, when the sunset shines, it sparkles as if inlaid with silver, and when night falls, it shines like a precious jewel that lights up the whole sky. 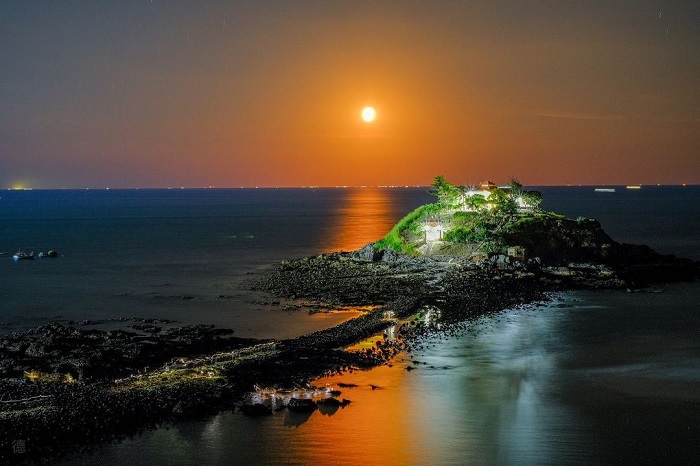 Standing on the island, you can not only enjoy the fresh, cool scenery “no dust from the ceiling” but also have the feeling that just reaching out your hand can touch the clouds and sky, what could be more wonderful than this.

Destinations not to be missed at Ba island Vung Tau

Although the area of Ba Vung Tau island is quite small, it only takes 15 minutes for you to explore every corner here, but that does not mean that it is boring, because there are many unique works here. There are many unique places for you to admire, such as the ancient Ba Temple – one of the most beautiful spiritual tourist destinations in Vung Tau.

This temple was built in 1881 on a stone pedestal 4m high above the ground to worship the gods of the sea, typically the goddess Thuy Long with the desire to bless the fishermen’s journey to sea. smooth, peaceful. 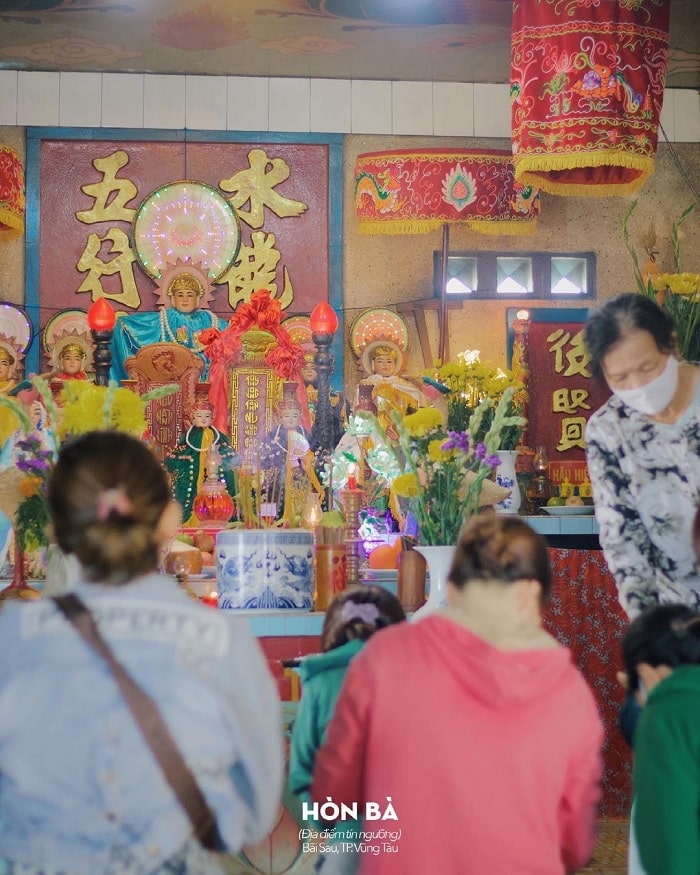 If you are lucky enough to come here in January, April, July and October (lunar calendar) on the right day of worship, you will admire the image of fishermen with bright smiling faces, one after another carrying the ceremony. Animals come to pray to Thuy Long, the goddess of luck and happiness, creating an extremely crowded and bustling atmosphere.

This house is made of wood, so when time has passed, it has deteriorated quite a lot, making many of the original things not intact and gradually lost, but thanks to the local reconstruction and restoration efforts, now when Traveling to Vung Tau island , you can still visit and remember a great doctor once.

Having been a witness to the nation’s bloody war, there are still many important historical sites left on this island, typically a 6m long, 3m long basement that was once a secret meeting place of the way. a network that you can visit, it will definitely bring a lot of emotions.

Around the area of ​​Mieu Ba island, there are large rocks that cannot be passed by boats, so it becomes an ideal place for fish species to live and develop. So, coming here, you can also experience an interesting activity with fishermen, sitting fishing, and then bringing the results to be processed into delicious dishes, oh, just thinking about it makes me feel so excited. . 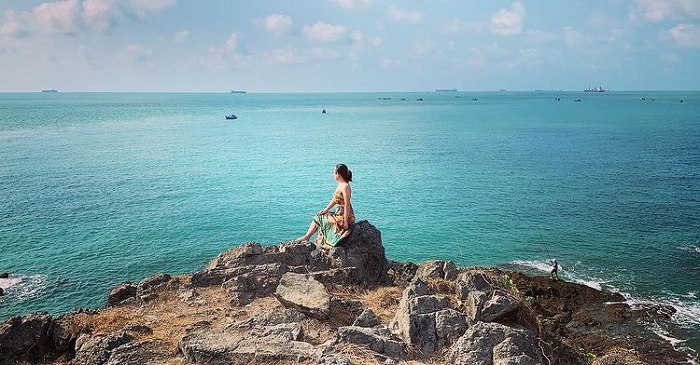 There are many fishing grounds on the island (Photo @meconkuteo)

How to get to Ba Vung Tau Island?

From Vung Tau city center, you ride a motorbike to the foot of Thuy Van slope or Back Beach, then park a car for about 5,000 VND to 10,000 VND / car, then walk 10-15 minutes from the parking lot to the sandy beach near the island. . From here, you will have 2 ways to get to Hon Ba island : take a fisherman’s boat and walk. In particular, walking is the most favorite because it is walking on a completely natural “legendary road” made of stone, flanked by immense sea water with silver waves racing to the shore, creating a scene with 1 – 0 – 2, attracting people’s souls. 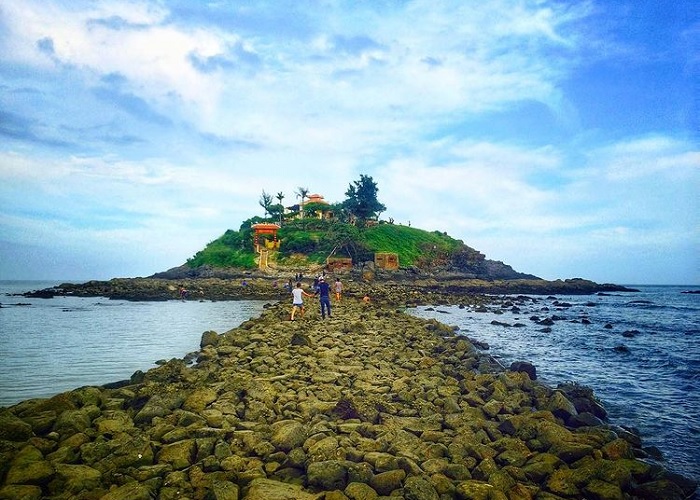 Unique walking path in the middle of the sea (Photo @weird.wanderers)

However, you can’t always experience this exciting feeling because usually, it’s only around 5:00 p.m. on the 14th and 15th of the lunar month when the water recedes, the road will appear, so there is a The right occasion or not depends greatly on your luck.

Note: there are a lot of sharp oysters on this road and very large mossy rocks, so please wear shoes and move carefully to avoid injury.

If you want to know what is “a piece of our own love with us”, don’t miss Ba Vung Tau island !