Lam Kinh relic is an ancient historical relic located in Xuan Lam commune, Lam Son town, in the area of ​​two districts of Tho Xuan and Ngoc Lac of Thanh Hoa province, and about 50km from Thanh Hoa city to the west. Northwest.

It is known that Lam Kinh is the birthplace of the national hero Le Loi, the ancestral homeland of the Le dynasty, and also the place where the Lam Son uprising was launched, the 15th-century feat made people admire for to this day. Therefore, King Le Thai To chose this place to build a second citadel called Tay Kinh (to distinguish it from the main capital Dong Kinh – Thang Long Hanoi). 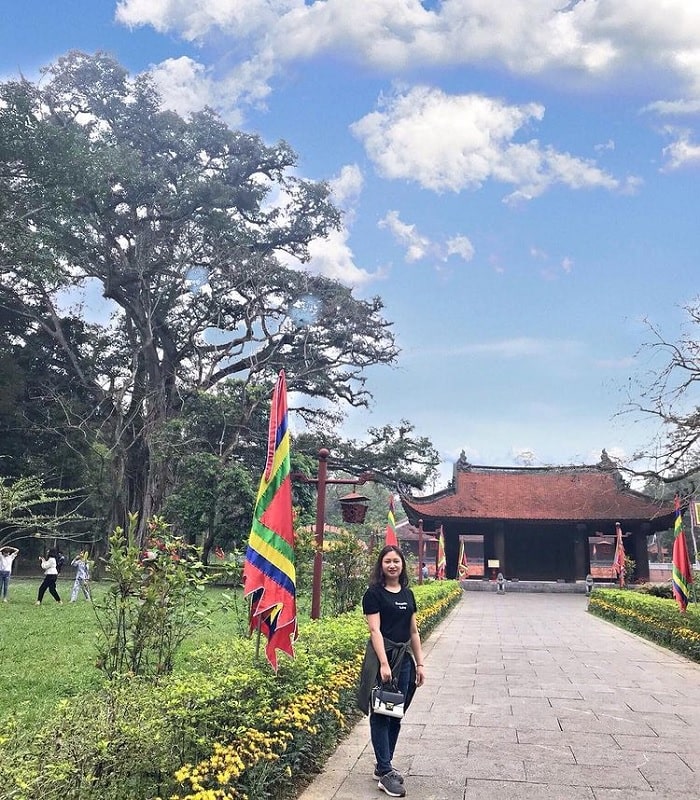 Accordingly, the construction process of Lam Kinh Palace was recorded by the “Dai Viet history book” as follows:

In 1430, Le Loi, after ascending the throne, proclaimed himself King Le Thai To, with the era name Thuan Thien, and changed the name of Lam Son land to Lam Kinh.

In 1433, when King Le Thai To died, he was brought to Lam Kinh for burial, and a large-scale system of temples and mausoleums also began to be built to worship ancestors and serve as a resting place for kings. Thai Hoang, Thai Queen, is the place where the ceremony is held when the king pays his respects to the mausoleum.

In 1448, King Le Nhan Tong issued a decree to Thai lieutenant Le Kha and the Department of Public Works to restore the degraded temples and by February 1449, the construction work was completed.

In 1456, on the occasion of the ceremony at Lam Kinh Palace, Thanh Hoa, King Le Nhan Tong named 3 buildings of the main hall: Quang Duc, Sung Hieu and Dien Khanh.

In 1962, this place was recognized as a National Historic Site.

Experiencing the ravages of time, weather and the fierceness of war, this building has been damaged and degraded quite a lot, so in 2002 the Prime Minister issued a planning decision to coincide with the planning. remodeled to have a complete architecture as it is today. 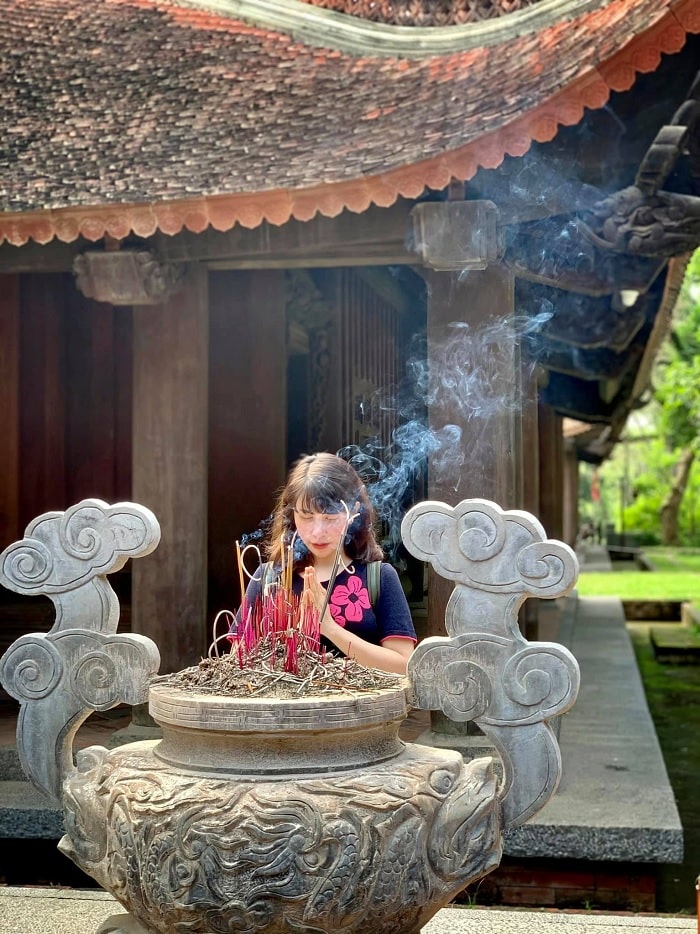 By 2013, the Lam Kinh relic site was recognized as a special national relic, affirming the important historical value of the country, and at the same time considered as the “golden cradle” of the Late Le period that descendants the afterlife must always be preserved.

The superficial and majestic architecture of Lam Kinh relic site

Lam Kinh Citadel leans against Dau mountain, facing Chu river – Chua mountain, on the left, is Phu Lam forest and on the right is embraced by Huong mountain and Ham Rong mountain, creating a unique position of the human spirit. fascinate people.

Although it has been restored, this place still bears the vestiges of a regal era with the overall construction located on a land of up to 30 hectares in the shape of the letter “Vuong” (王) with a length of 314m and a width of 314m. 254m. The bow-shaped wall has a radius of 164m and a thickness of 1m embracing many unique architectures such as:

The path to Lam Kinh’s historical site is located along the peaceful Ngoc River originating from Tay Ho, on both sides of the river are two rows of lush green trees reflecting in the clear water. The river bottom has a lot of beautiful colorful round pebbles and across the river is the white curved white stone bridge that has been tinged with moss, looks like a poetic ancient scene that we often see on the riverbank. . 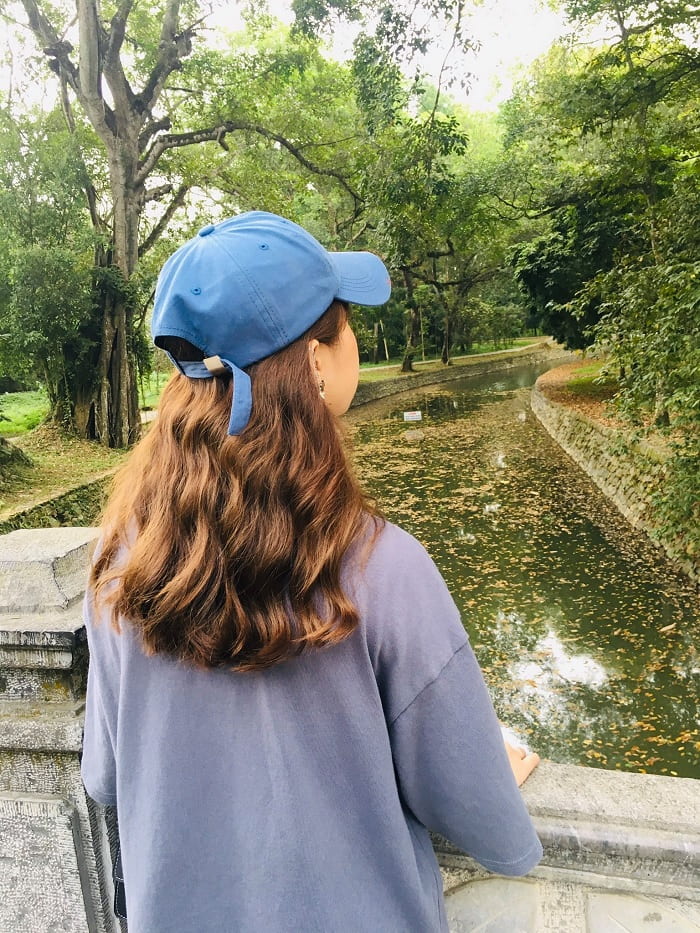 Crossing the bridge about 50m, you will admire a huge ancient well dating from the time of the ancestors of Le Loi, formerly there was a lotus, but now the water surface is as clear as a mirror reflecting everything. . The interesting thing about the well is that the water inside does not flow all year round, the north bank is paved with stone steps up and down, so to this day it is still an important source of water for the Lam Kinh citadel.

Ngo Mon or Nghi Mon of Lam Kinh relic is the southern gate with quite monumental architecture with 3 compartments, of which the middle is 4.6m wide, the two side compartments are 3.5m wide, and 3 doors with the middle door. 3.6m wide, two side doors 2.74m wide with a towering column with a 78cm line in the middle to serve as a pillar.

In front of the Ngo Mon Gate, there are two fierce stone clams dating back hundreds of years old standing guard as if to protect the peace of the inner temple. In the past, this was the place to receive the ritual before entering the shrine, but now it is the only gate to welcome you to visit the interior. 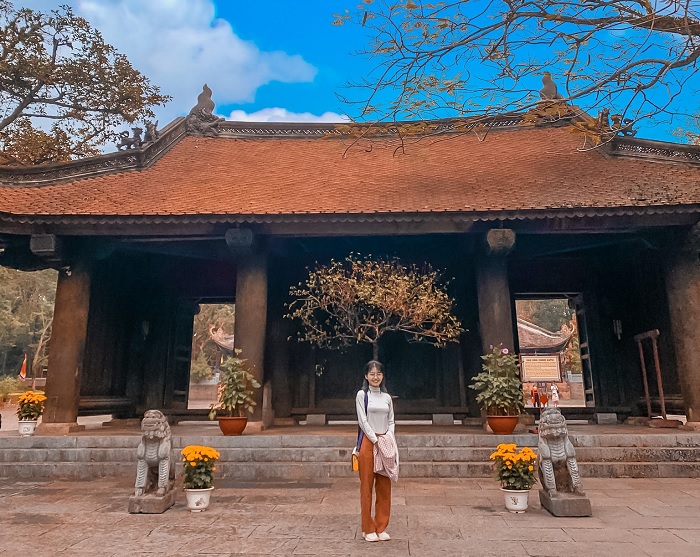 Stepping through the Ngo Mon Gate is the Dragon Court – the area that occupies the largest area in the Lam Kinh national relic site with more than 3,500 m2 and has 3 paths to the main hall, this is also a special place to serve sacrifices on occasions. large during the year.

The main hall was built in the shape of the letter “public” (I) with 3 large buildings made entirely of wood, with rows of giant pillars with a diameter of up to 62cm, making the building always stable and firm. despite the harshness of the weather and the ravages of time. This is also a work of special value in terms of architectural art of the Le So period. 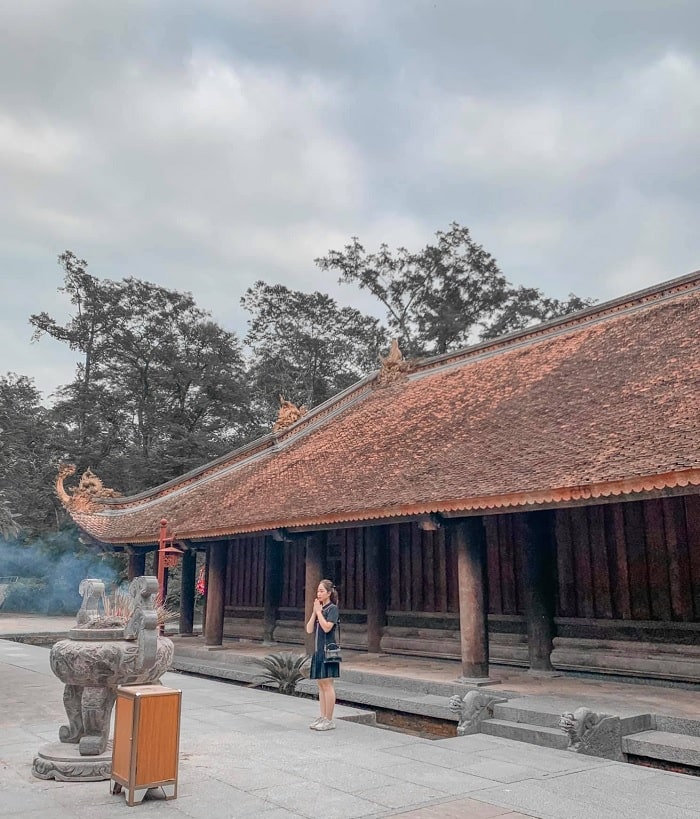 Going to the back of the main hall, we will see 9 Thai temples of Lam Kinh decorated dignifiedly, each building is designed in a square with an area of ​​approximately 180 m2 – 220 m2 folded into a bow shape. take the main hall, the roof is covered with comedy nose tiles, exuding an ancient and quiet scene. This is a place to worship the kings and queens of the Later Le dynasty, so it is always full of incense and has a sacred and respectful atmosphere. 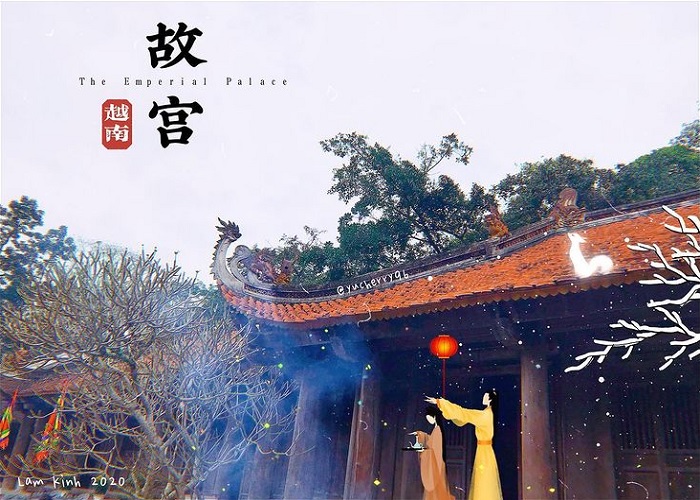 In particular, the most prominent is Vinh Lang – the mausoleum of King Le Thai To was built in the southwest of the citadel with a beautiful terrain with his back leaning against Dau mountain, facing towards Chua mountain, two high mountains on both sides. surrounded to form the posture of “tiger and dragon adoration”, simple but majestic.

In front of the mausoleum, there are two stone statues of mandarins and four pairs of animal statues (ne – horse – rhinoceros – tiger) as if to keep the peace in the mausoleum. 300m from the mausoleum, a stone stele made of monolithic sediment placed on the back of a stone turtle is 2.97m high, 1.94m wide and 0.27m thick. On the stele, there is content compiled by the famous Nguyen Trai, recording the life and career of the king, with sophisticated decorative art, both of artistic value and a valuable historical document for researchers. study history today. 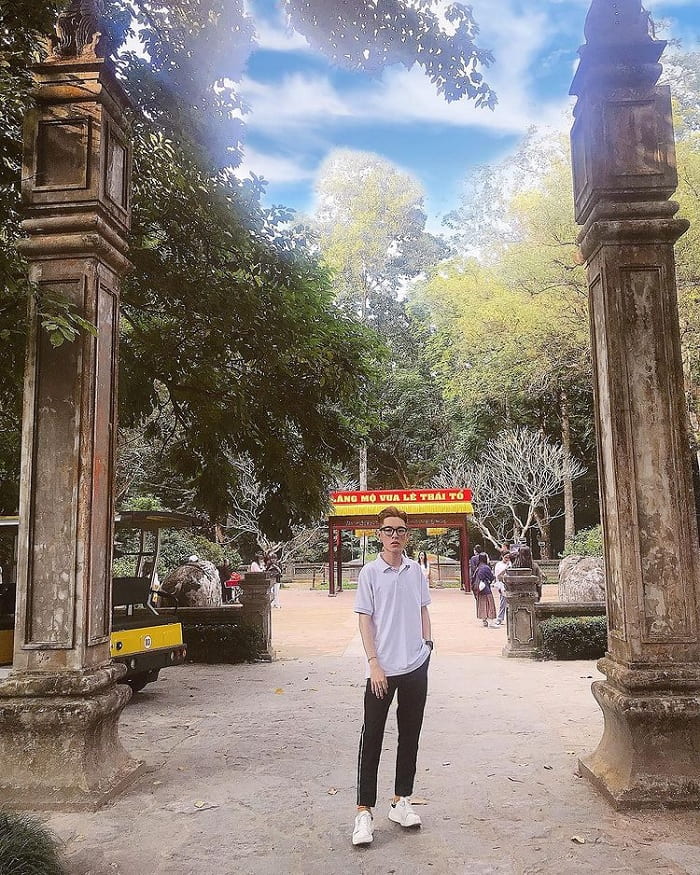 Along with 18 rare heritage trees hundreds of years old in the campus such as: a special banyan tree that does not spread out as far as other ancient trees, but embraces the city’s roots and turns into a tree about 20m high, dozens of people hug. can’t. And the Thi tree living in the banyan tree is still green all year round and the fruit is fragrant in a corner of the sky, forming the famous Da – Thi love story in a region. 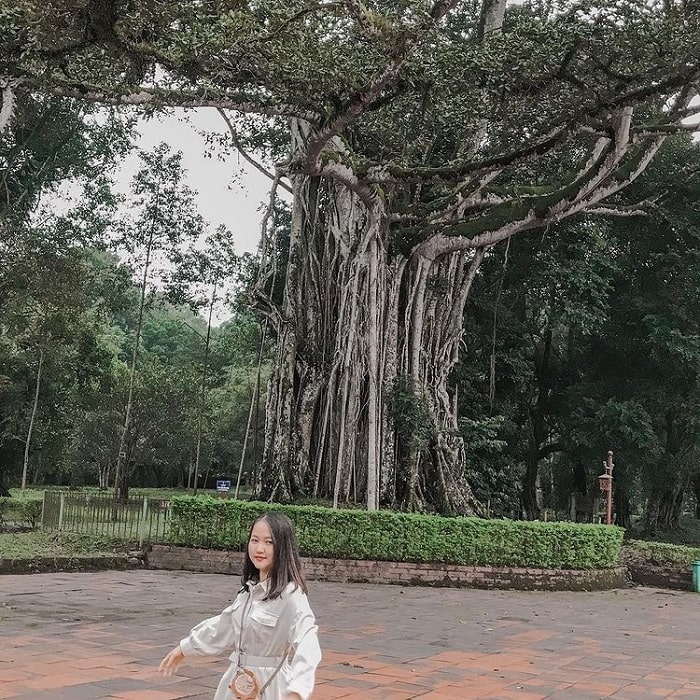 Goc Da – Thi is famous near and far (Photo @trinhminhang)

Or the 600-year-old “sponsor” iron tree, which is green, suddenly loses all its leaves and when the construction project to restore the main hall of the Lam Kinh relic site is completed, the tree also dies. So people considered it as a sacred tree corner, devoting themselves to rebuilding the main hall.

Besides, there is a guava tree that knows how to “smile” more than 3m high next to King Le Thai To’s mausoleum, just lightly touching the branches of the tree (also known as the armpit part of the tree) will make the foliage vibrate as if laugh – an interesting, mysterious phenomenon that no one can explain.

If on normal days, how quiet and peaceful the Lam Kinh relic is , when it comes to Lam Kinh festival held on the 21st (Le Lai’s death anniversary) and 22nd (Le Loi’s death anniversary) of the 8th lunar month every year, The atmosphere here is so vibrant and bustling, people eagerly come together to see the festival and remember the merits of the ancestors.

The ceremony will take place in the magnanimous atmosphere of the drums and gongs resounding in the sky with the majestic procession of the palanquins of King Le Thai To and Le Lai in accordance with traditional rituals. As for the festival, the festival was lively with musical performances re-enacting memorable historical events such as the Lung Nhai oath festival, the moment Le Lai saved, the time of the liberation of Dong Quan citadel or the moment of King Le Thai To. ascending the throne … with interesting folk games such as dragon dance, spring genealogy, drum festival, throwing con, pon pon dance, crossbow shooting and Binh Ngo game… 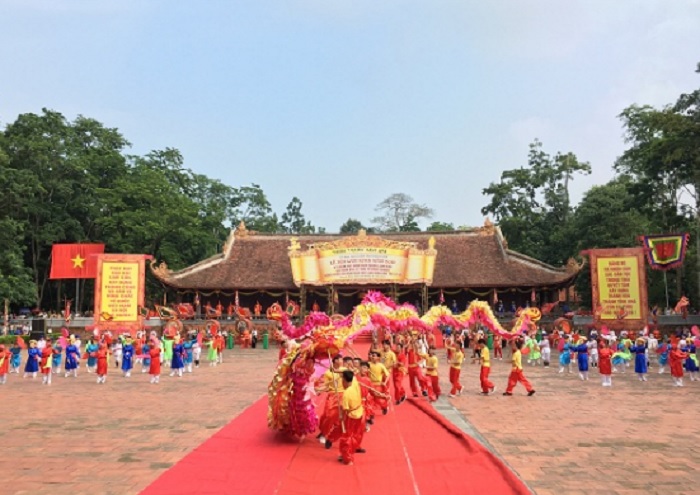 In particular, when traveling to Lam Kinh at this time, visitors can also enjoy many famous specialties here such as: sweet and spicy sweet and spicy Lam Phu Quang tea, chewy Tu Tru Gai cake or fried Dam Set perch. golden, greasy… sure to be delicious and forget the way home. 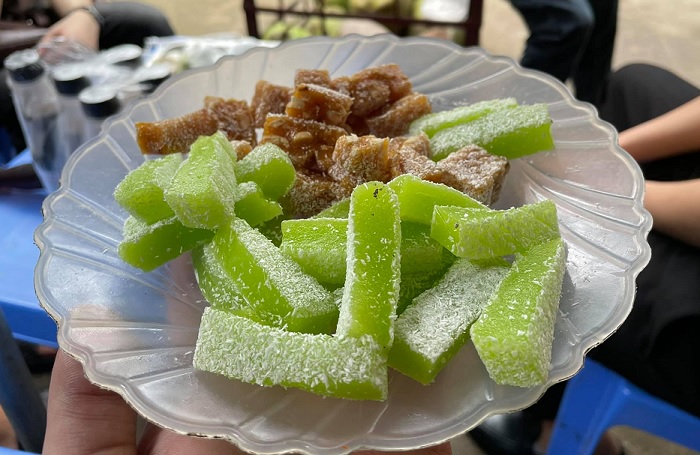 Traveling to Thanh Hoa, don’t let the waves and clouds at the beaches hold you back for too long, because a trip to the Le Dynasty at Lam Kinh relic site will definitely make your trip more memorable and wonderful.