No need to apply for a visa, no need to go abroad, do you believe you can still check-in at the Egyptian Pyramids, Great Wall, Statue of Liberty, Eiffel Tower,…? If you feel too wild, go to the park of the world’s wonders in Da Nang to see how true it is!

About Danang Wonders of the World Park

In the past time, young people always whisper to each other about a super unique virtual living coordinates called Da Nang World Wonder Park . This place is located on Le Van Duyet Street, Son Tra, near Thuan Phuoc bridge. The park is a masterpiece of art located in the complex of Hoa Binh Green Hotel. This place was built with the purpose of celebrating the Apec event taking place in Da Nang in 2017. Possessing an area of ​​​​up to 200m2, the park can “contain” all the wonders of the world. 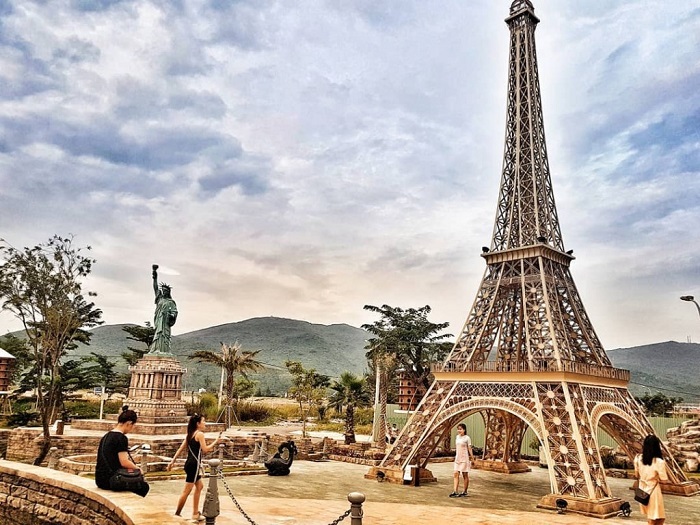 The work includes all 9 famous wonders of the world and Vietnam are simulated such as:  Great Wall of China,  Eiffel Tower , windmill, Statue of Liberty, Turtle Tower,… Especially The pyramid works, Arc de Triomphe, One Pillar Pagoda are also inlaid with 24k gold. 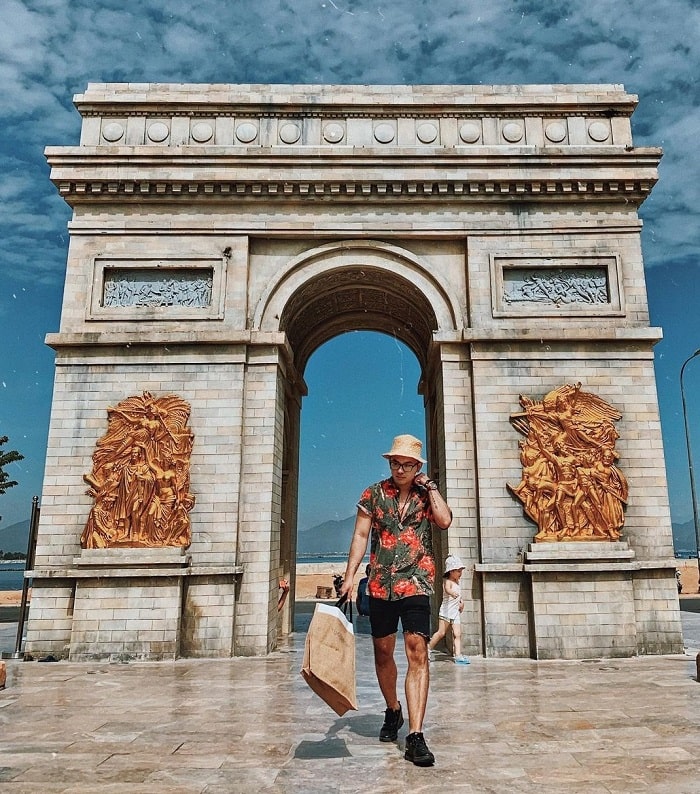 Da Nang World Wonders Park has located just 2km from the city center. So getting here is very easy and fast. Starting from Dragon Bridge, you go along Vo Van Kiet Street, at the roundabout, turn into Ngo Quyen Street. Go to the roundabout at Han River Bridge, turn onto Tran Hung Dao Street, and then Le Van Duyet. Just go straight, cross the foot of Thuan Phuoc bridge, then on the right is the park. 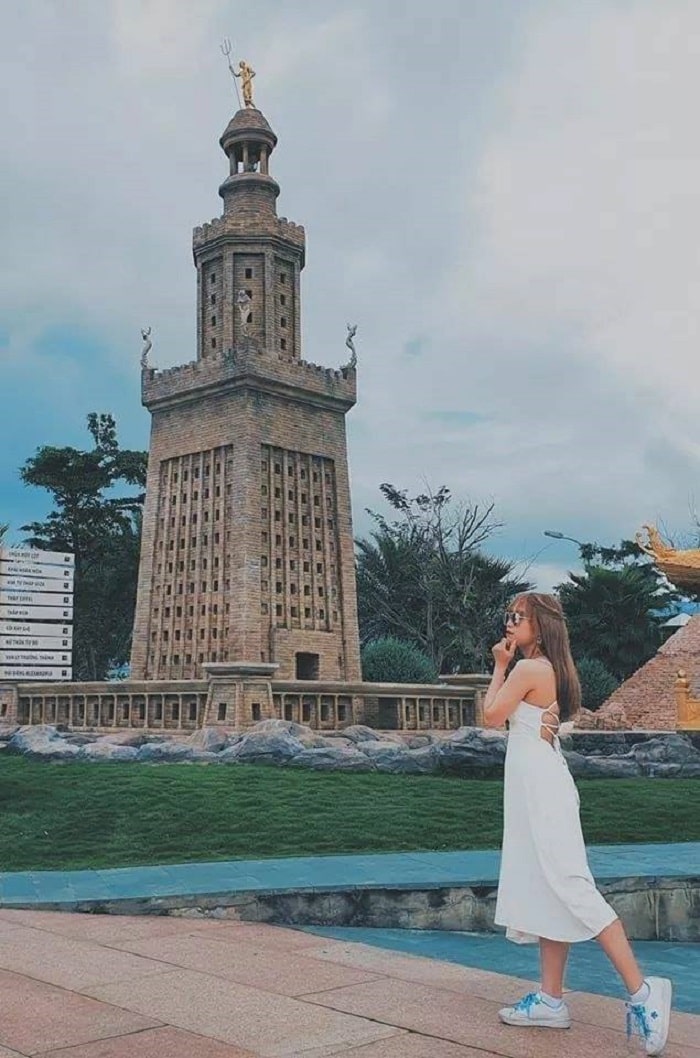 The way to the park is quite easy

When is the best time to visit Da Nang World Wonders Park?

Da Nang is a famous tourist destination in the country, so at any time of the year, the number of tourists flocking here is also very large. According to Da Nang’s travel experience, if you want to experience the feeling of crowdedness and festive atmosphere, you should go to the world wonder park in the summer. However, if you do not want to go for a walk under the hot, sultry atmosphere, avoid going in the high season. The period from September to November is also very reasonable. 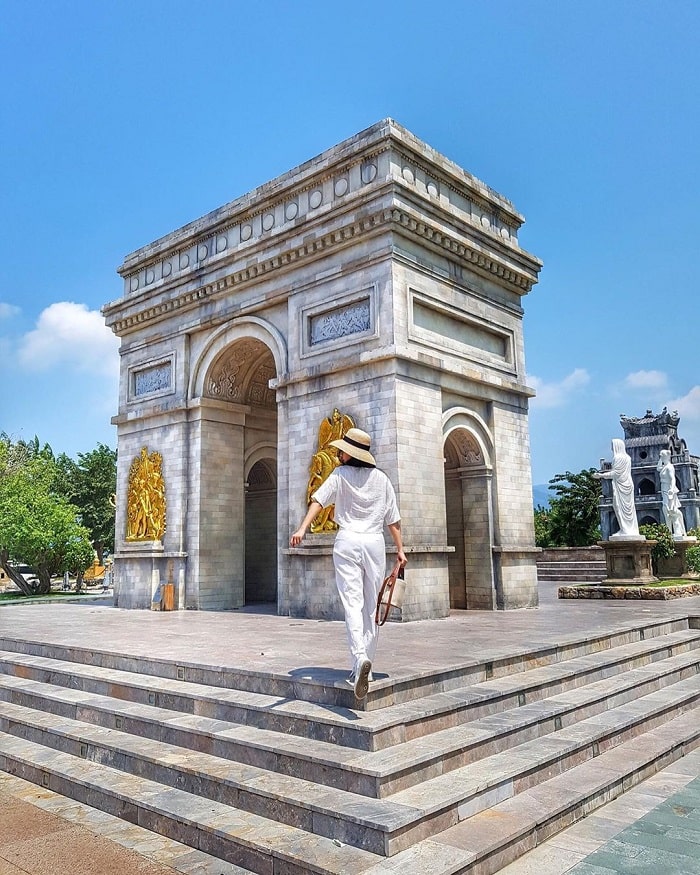 Currently, Danang Wonders of the World Park is open to visitors for free. The park is always open 24 hours a day so that everyone can freely play without time restrictions. 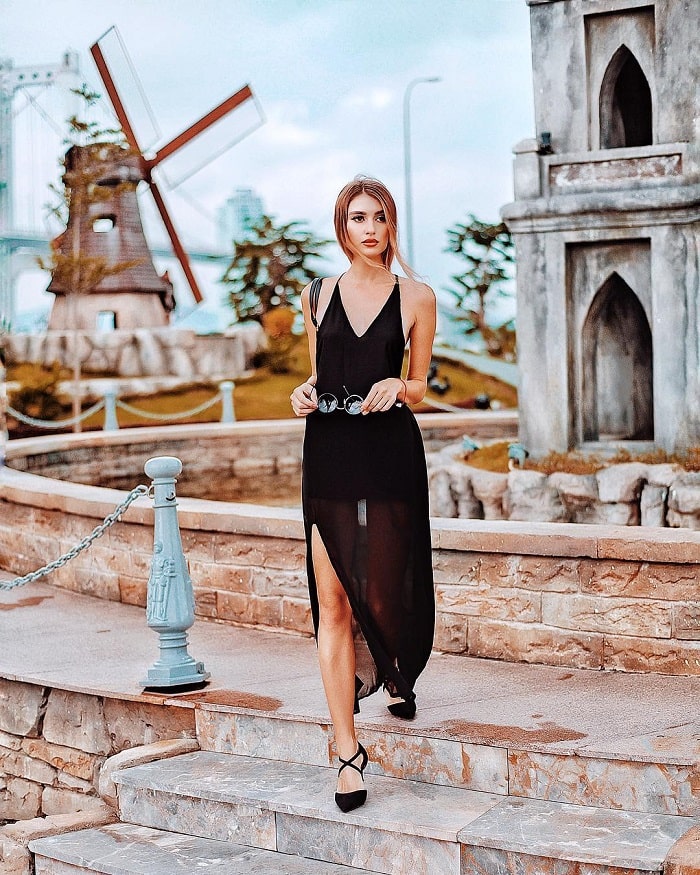 This is a completely free check-in point

In the park of world wonders in Da Nang, there is a statue built in imitation of the American Statue of Liberty. This is a symbol of people’s dreams, freedom and becoming a cultural heritage of mankind. The size of this statue is much smaller than the original version, but in return, the carved lines are extremely meticulous and delicate. 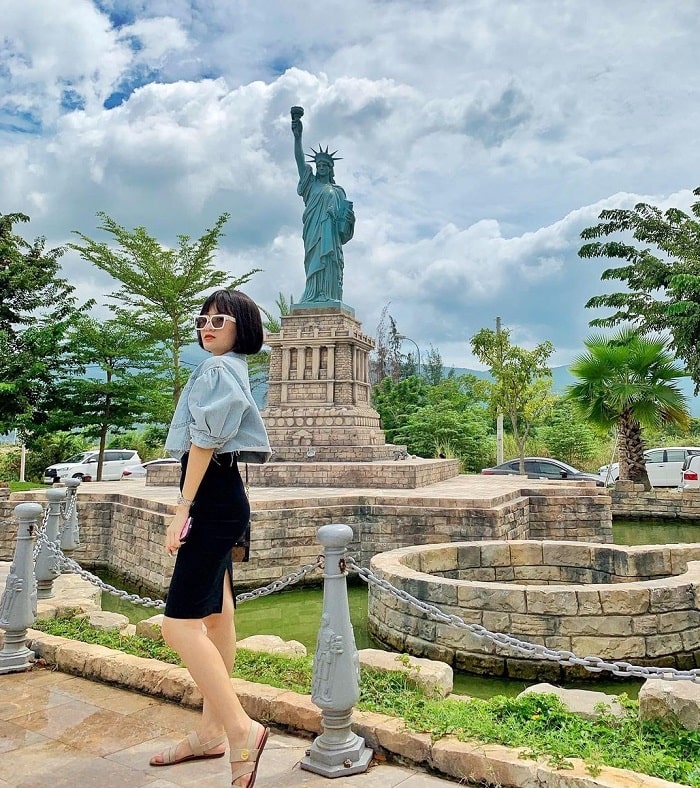 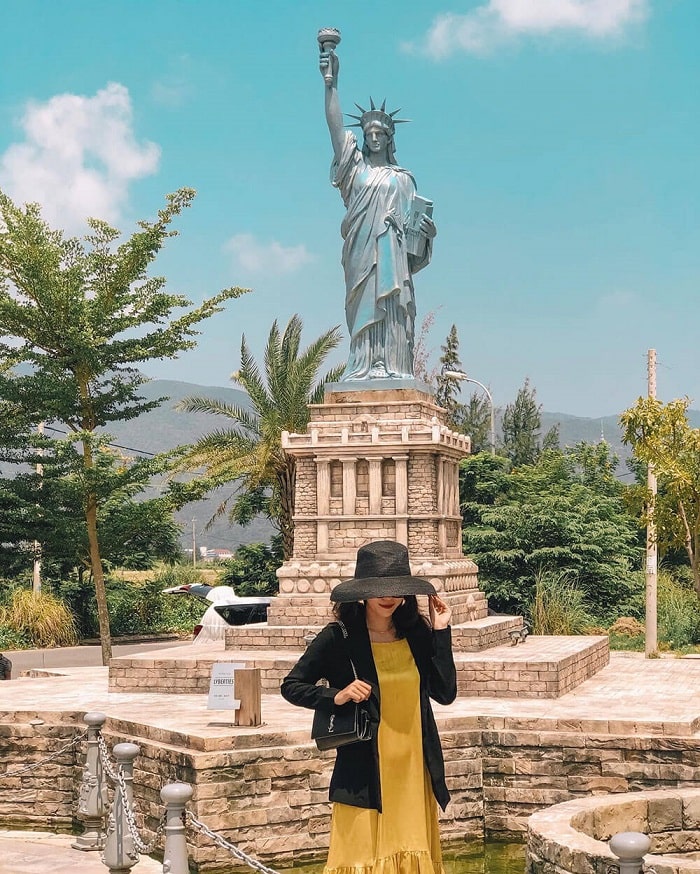 This is the symbol of man’s dream and freedom

Inspired by the great construction of the Great Wall of China, this version in the park of wonders is built from clay as the main material. The color of the clay combined with the homemade paint makes this work extremely realistic. 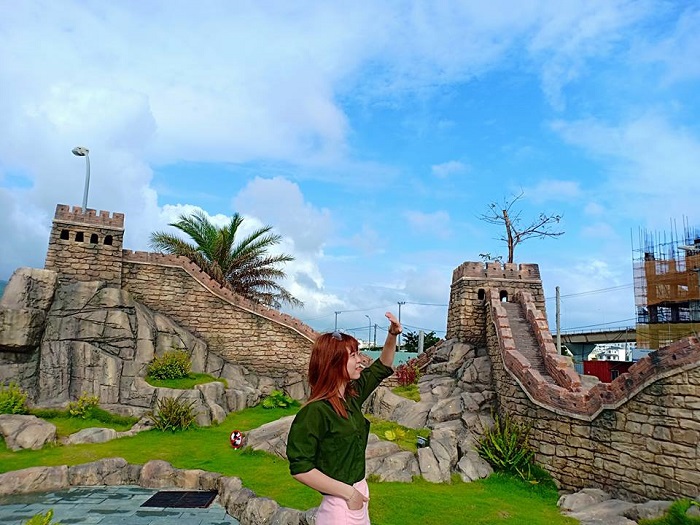 Version of the Great Wall of China in Da Nang This project is very realistic

A very prominent project in Da Nang’s World Wonders Park is the Eiffel Tower. With a height of about 20m, the tower is modeled after the great Eiffel tower in France. Especially, it is also painted with a layer of iridescent gold paint that looks very luxurious. This is also the check-in corner that many young people visit the most. 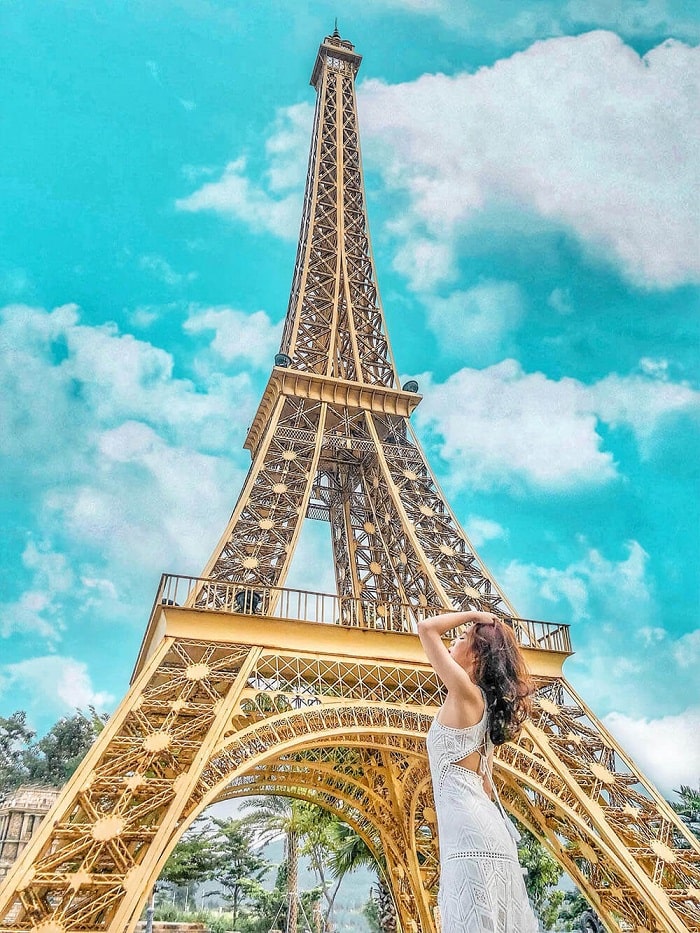 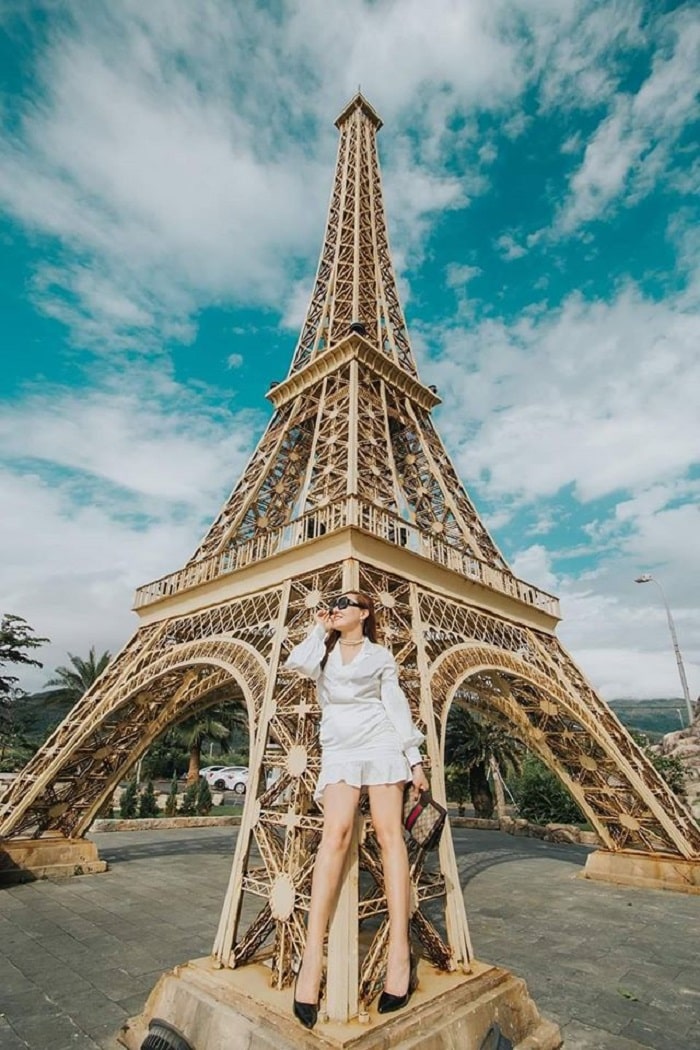 Thought I was in Paris?

The Pyramids are an eloquent symbol of Egypt. With professional hands, Vietnamese artisans have created a work similar to the original version from small to large details. Coming here, visitors will be attracted by the golden color of the paint covering the sphinx statue. 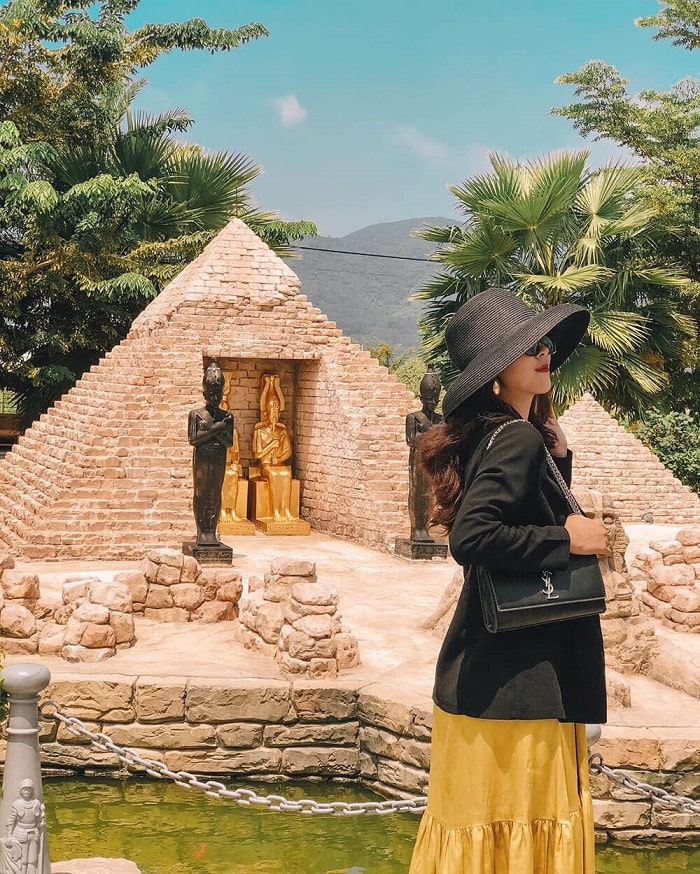 The pyramid of Giza has been recreated 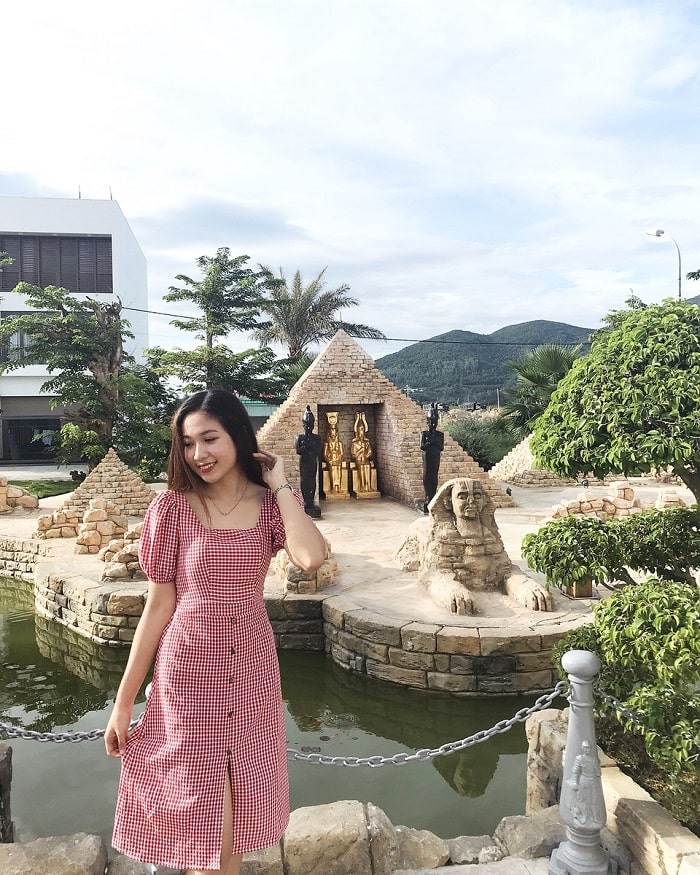 The sphinx statues are covered with iridescent gold paint

The Arc de Triomphe is a very famous architecture in Paris, France. Now it has been simulated in the park of world wonders in Da Nang . With meticulous design and gold-plated statues on both sides of the gate, this place will definitely give visitors a beautiful virtual background. 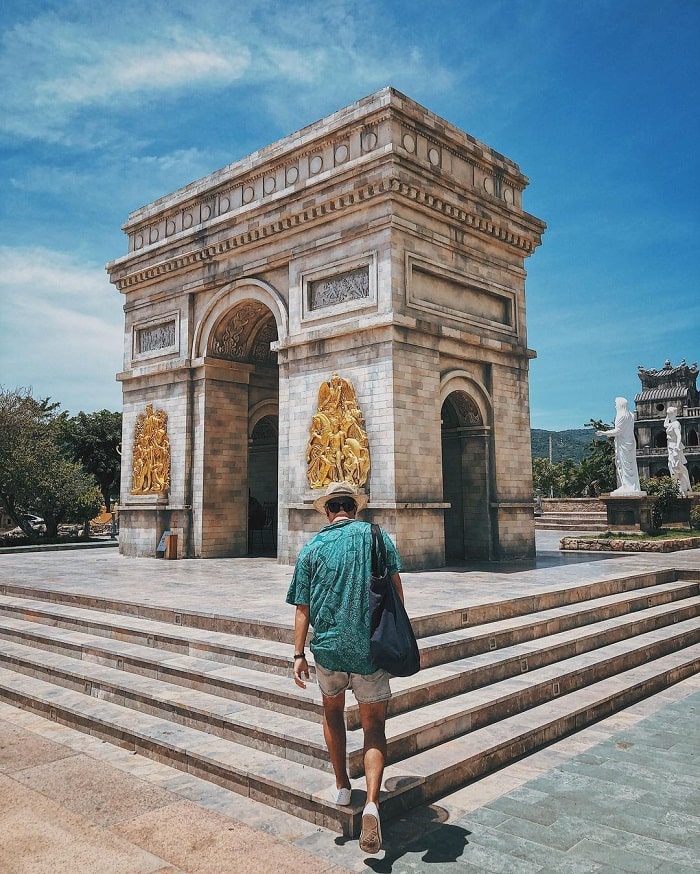 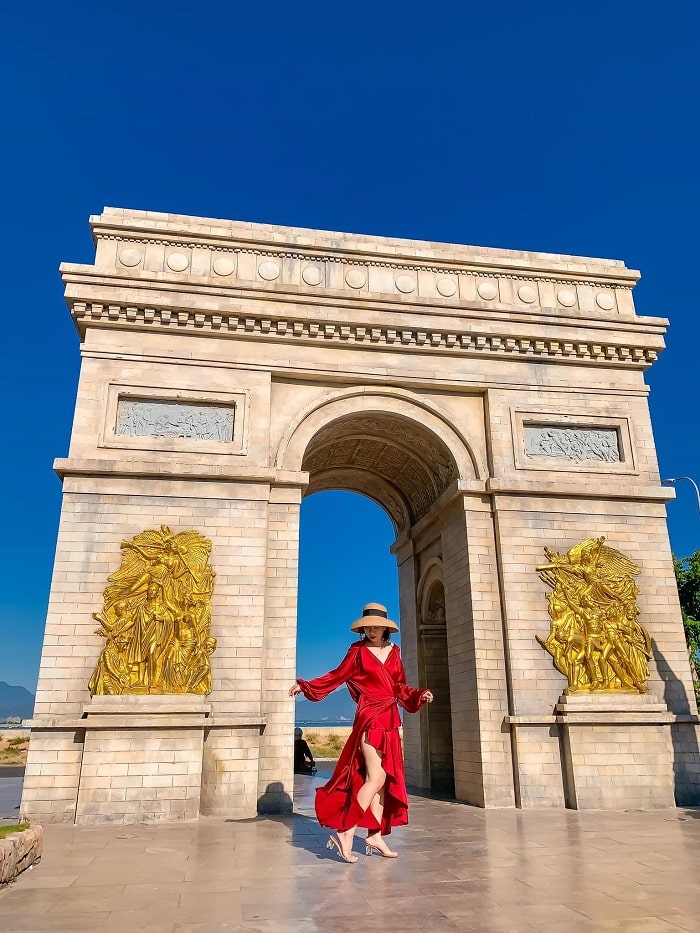 This is the corner to check in million likes!

One Pillar Pagoda is a famous symbol of our country and an image known to many international tourists. When recreated in the park, the artists used the material of baked bricks and covered the outside with 24k gold paint. 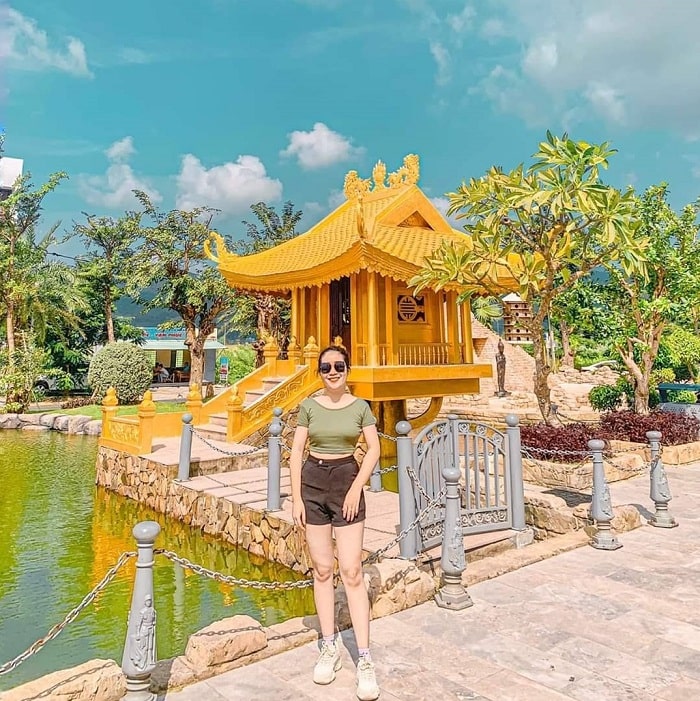 The temple is inlaid with 24k gold paint

Turtle Tower was built in the central area of ​​the park of world wonders in Da Nang with the purpose of expressing the spirit of the Vietnamese people. This is also the top attraction in the park. 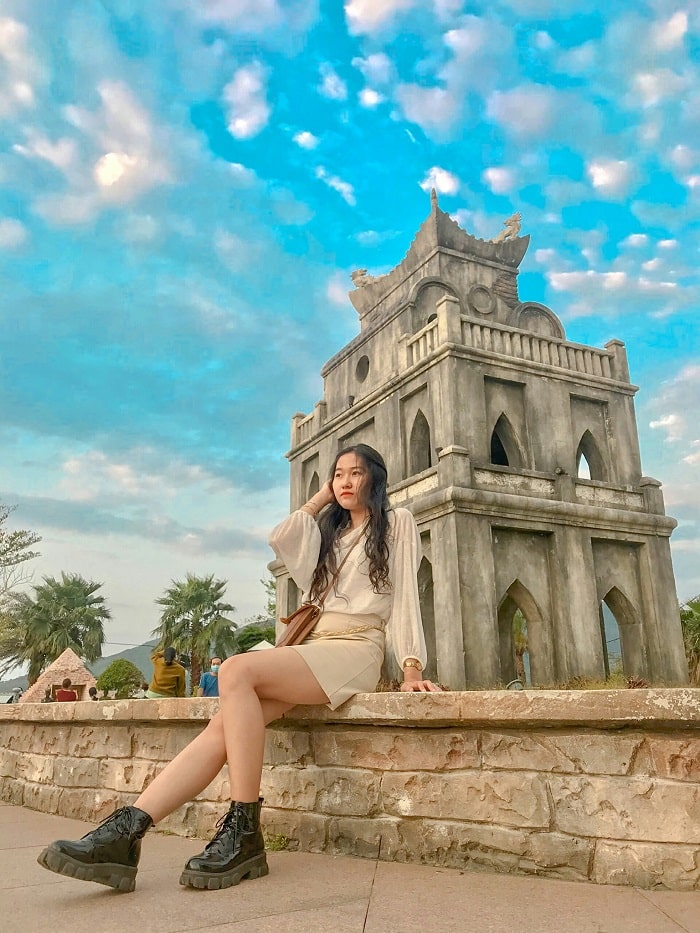 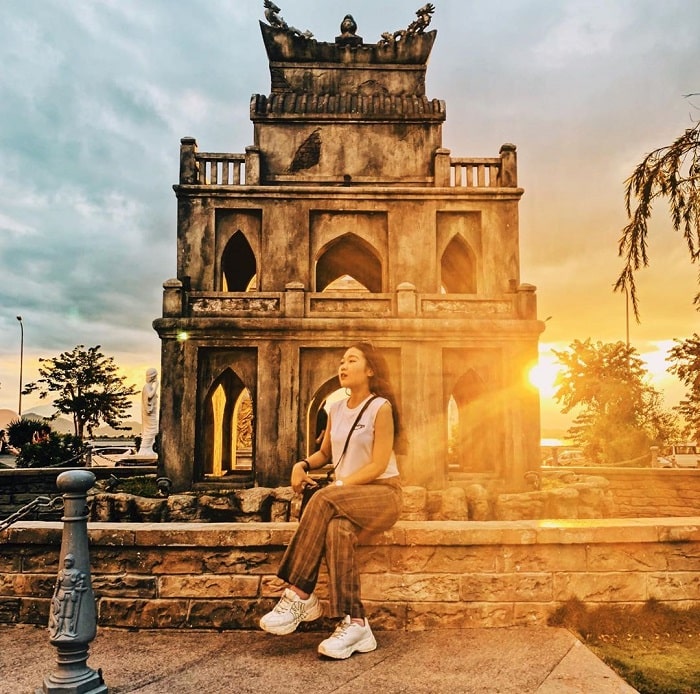 Le Penseur sculpture is a famous architecture known to many people for its posture while sitting and leaning on its chin to think. This funny creation was present in the park of world wonders in Da Nang . 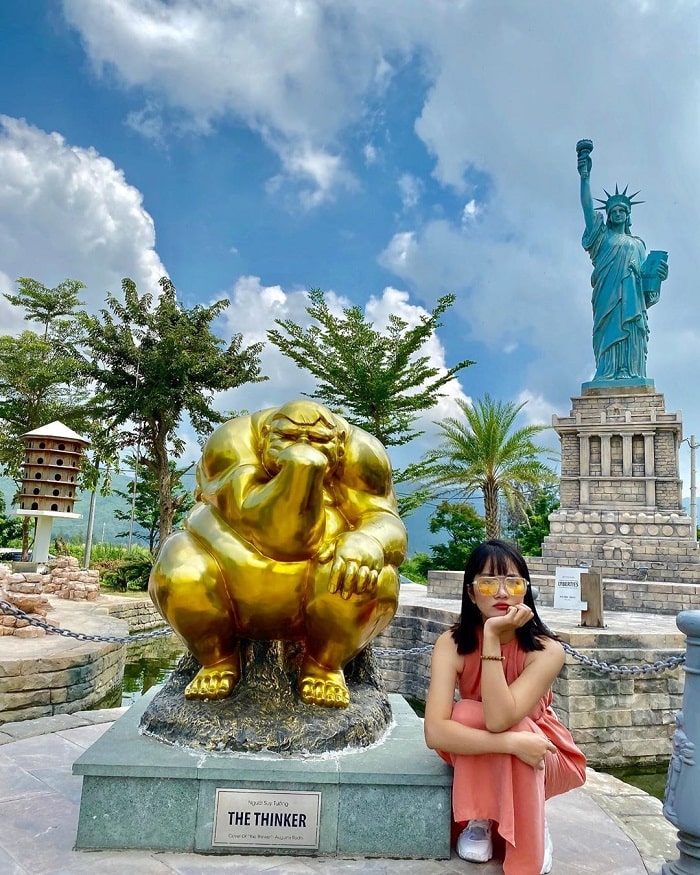 If you are a lover of the Netherlands, love the windmills but have not had the opportunity to visit, then go to the park of the world wonder in Da Nang . Here, the image of the windmill is simulated almost completely, with 4 stationary cross-shaped propellers with deep brown color. The coordinates are where you live in a beautiful virtual world. 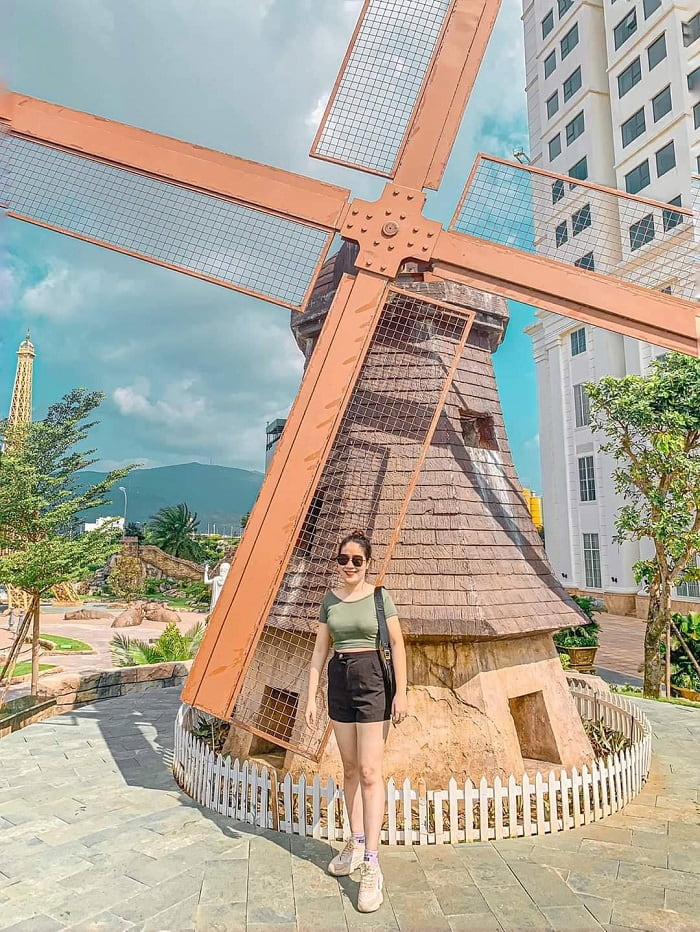 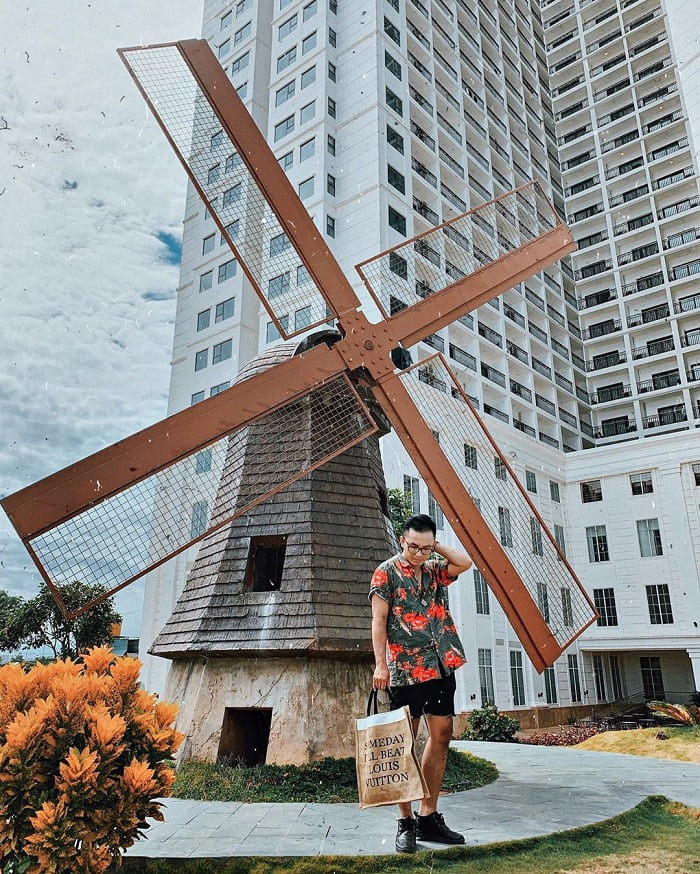 Da Nang Wonder Park is like being built specifically for the “virtual living” team. If you have the opportunity to travel to Da Nang , prepare some beautiful “dresses”, take a walk around here, and then drop some gentle poses to have a sparkling album already.