Traveling to Soc Trang , visitors not only experience a colorful and cultural land but also have the opportunity to visit many famous ancient Khmer temples such as Bat Pagoda, Kh’leang Pagoda, …

Soc Trang is a province in the Southwest region and is also home to many ethnic groups such as Kinh, Hoa, and Khmer. Famous as the country with many of the most religious works in the Mekong Delta, when you come here to travel and explore, you will encounter many ancient and magnificent temples and pagodas, bearing typical architectural imprints. separate, not mixed with other places, including the temple named Kh’Leang.

The Khmer-style ancient temple Kh’Leang is located in Soc Trang city – where there are more than 20 temples of many different ethnic groups. In particular, this temple also has a very sacred meaning to the Khmer people because it is the place to celebrate religious ceremonies and typical festivals of the Khmer people. In addition, this is also a work to preserve Buddhist teachings, display literary and artistic works 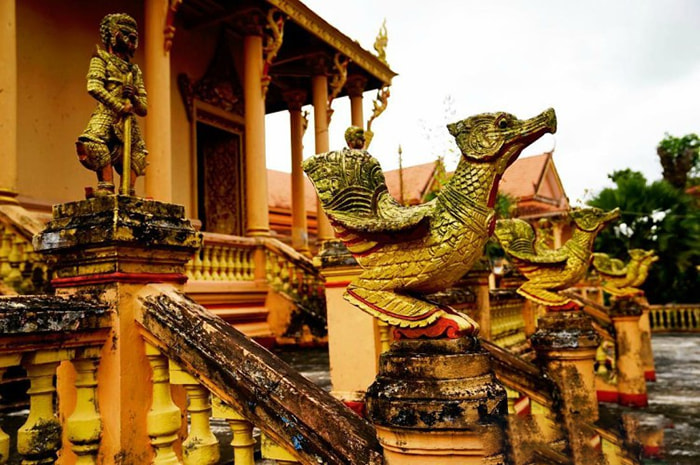 Soc Trang is a land with many pagodas in the West. Photo: amsovivian

Kh’Leang Pagoda has a long history

According to ancient legends, Kh’leang is one of the oldest pagodas, the first religious work was built in the region, specifically around 1532, and associated with the place Soc Trang, in the middle of the campus about 4,000 wide. m2. The imprint of the land of Soc Trang is associated with the name Kh’Leang because if translated from Khmer, it will mean “land of warehouses”, reminiscent of a rich and rich ancient land. 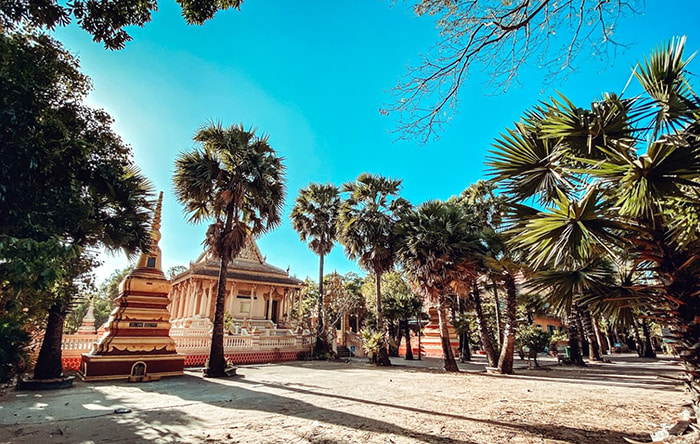 The name of the ancient pagoda Kh’Leang is associated with the legend of the place Soc Trang. Photo: thamhiemmientay

At that time, Soc Trang was still a wildland, unexplored by human hands, so the population was very sparse. Even at the beginning, the pagoda was quite rudimentary because it was built with locally available materials, contributed by residents in the area such as bamboo, wood, leaves, …

To this day, the vestiges of the early establishment of the pagoda have disappeared, but have been replaced by all modern architecture since the pagoda was rebuilt in 1945. 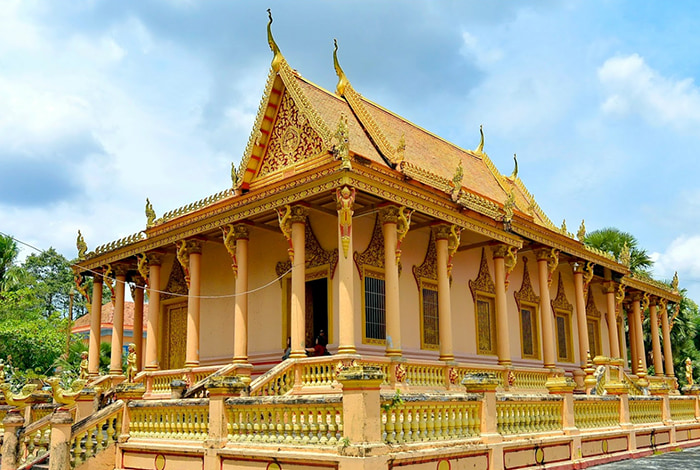 Kh’Leang ancient pagoda with a history of nearly 500 hundred formations, existence and development, so far still bears the imprint of Khmer architecture, showing the beauty of a sophisticated, sharp, and humorous construction style. harmonize Vietnamese – Chinese style in the layout and arrangement.

Where is Kh’Leang Pagoda located?

As one of the ancient Khmer pagodas in Soc Trang, Kh’leang ancient pagoda has a beautiful and convenient location because it is located in the center of town, on the banks of the romantic Moon River. The project is located in a large campus, surrounded by a fence, the entrance gate is meticulously decorated with traditional Khmer patterns, looking up is an ancient canopy, jaggery – a species of tree associated with associated with the life and culture of the Khmer ethnic people. 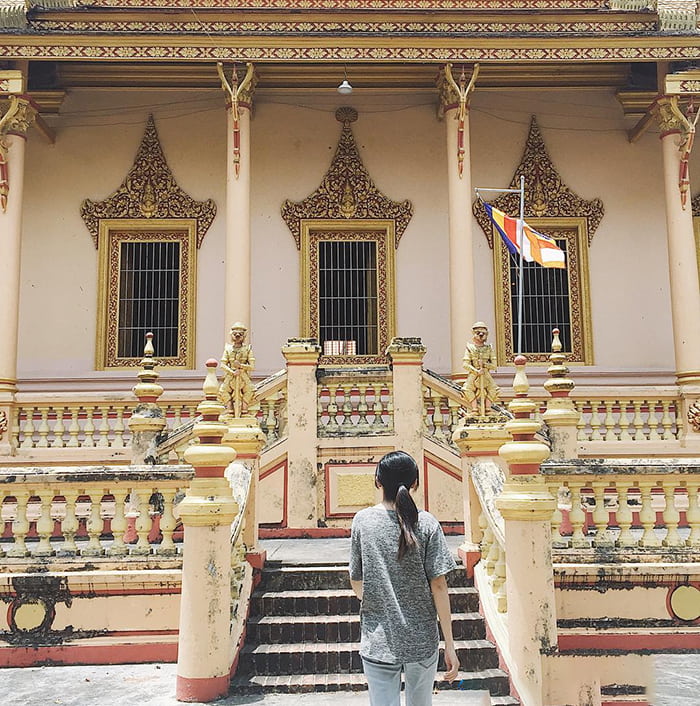 Visiting the ancient temple, visitors will both enjoy the fresh air in the spacious and green campus and learn about ancient Khmer books as well as being told about the legend of the source by local monks or nobles. original Soc Trang, and admire the unique architecture of the temple shown through the beauties below. 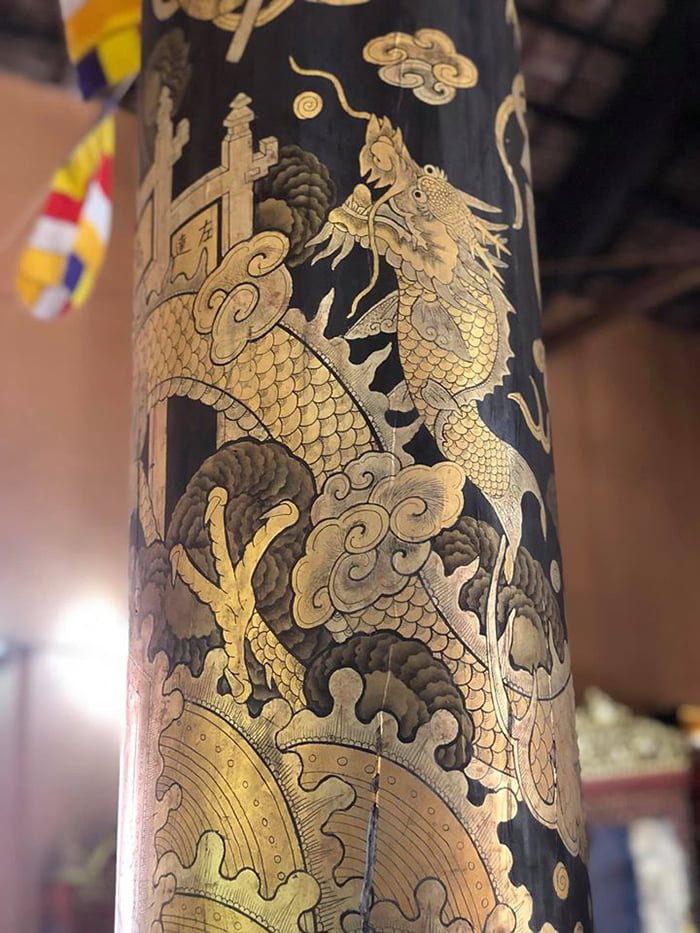 The pagoda has great historical and architectural value. Photo: dulichmientay

The unique architecture of Kh’Leang . pagoda

According to ancient bibliographies, Kh’Leang ancient pagoda was built in 1532, with the main materials being wood and leaves. Through each period, in 1918 and 1945, the temple was rebuilt many times with bricks and tiles to have the present appearance. Overall, the pagoda has the same architecture as the Theravada Buddhist temples in Thailand and Cambodia. 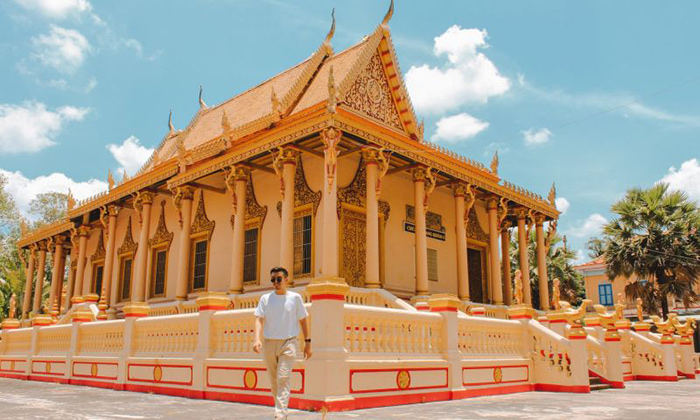 Just like Chen Kieu pagoda or Bat pagoda, Khleang ancient pagoda architectural complex includes a main hall, sala area, monk house, and hall,… The main and auxiliary works are arranged in harmony on the ground. tall. The pagoda has a large outer fence and then gets smaller inside. A special feature is that the distance between the fences is very wide, making visitors feel that the temple occupies a very large area. 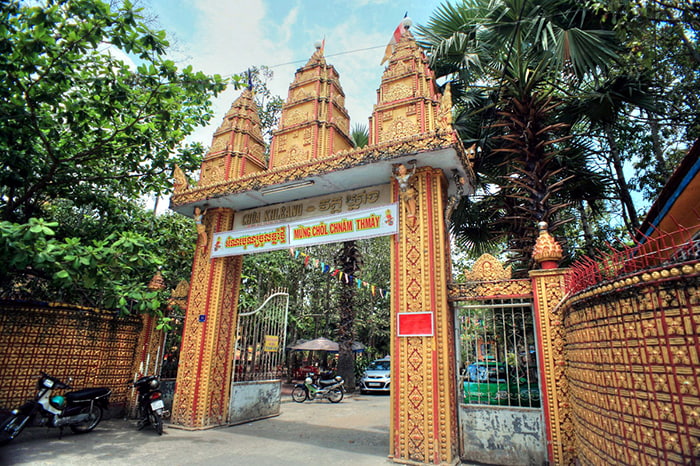 The difference of this Khmer religious work compared to Hang Pagoda, Ong Bon Pagoda, or Ba Thien Hau My Xuyen Pagoda is that most of them are built in the style of traditional stilt houses of the ancient Khmer ethnic people in the South. The edge of the roof has a winding dragon statue, the head is fan-shaped, the tail is curved. Not to mention, the main or secondary works are sculpted and carved with sophisticated motifs showing the ancient and sophisticated architectural style of the Khmer people. 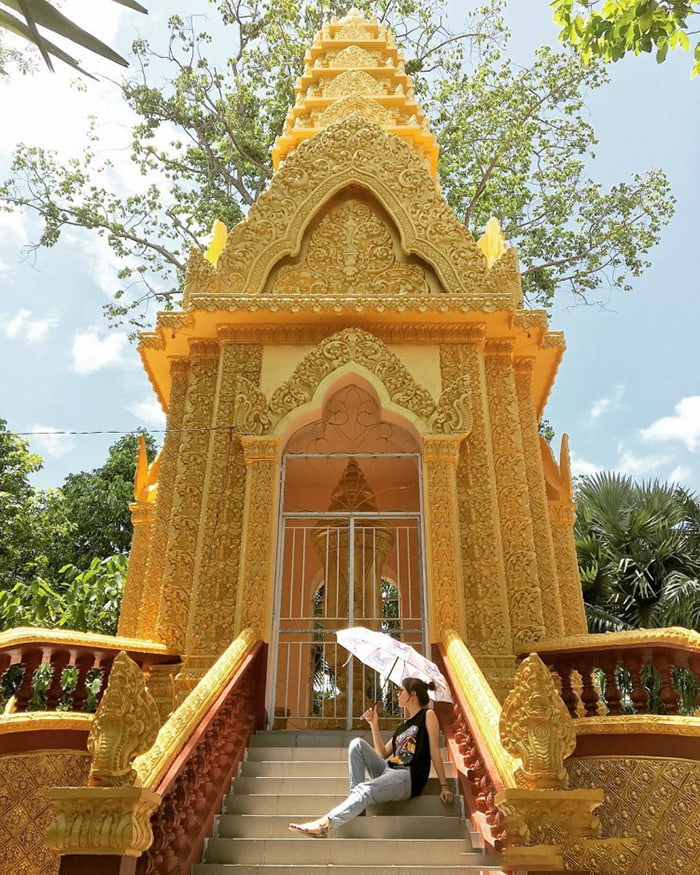 First, as soon as you enter the campus of Kh’leang self, you will realize that the gate of the pagoda faces the East and is decorated with elaborate patterns and vibrant colors typical of Khmer culture. The roof of the pagoda is built in the form of three levels. On each level, there are 3 folds with the middle fold larger than the side folds and especially there is no pagoda roof tower. At the corners of the roof of the pagoda is a strange curved snake tail shape. 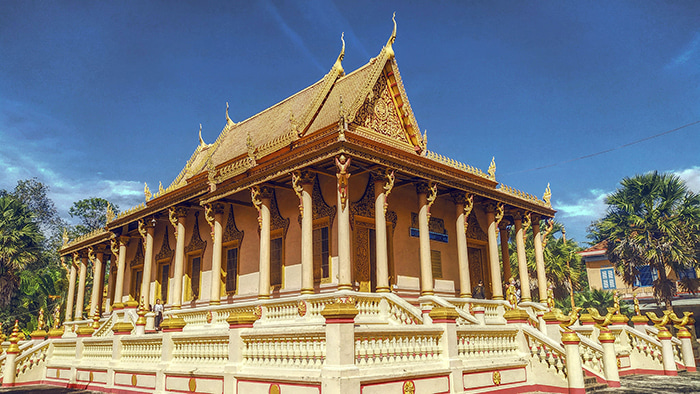 The main hall is located in the center and is divided into three levels. Photo: thamhiemmekong

But the most special and meticulous is the main hall of the ancient temple. Kh’leang Pagoda was built high with 3 steps, each step is about 1 meter high, surrounded by a fence. In front, there are 7 rows of horizontal columns in front, each row has 10 pillars extending to the back. The wooden pillars are quite large, smooth black, painted with gold, and engraved with images talking about the life of Buddha and Buddhist activities. The ceiling of the main hall and around are decorated with many drawings of the image of Buddha, thereby showing the harmony between Khmer architecture and painting. 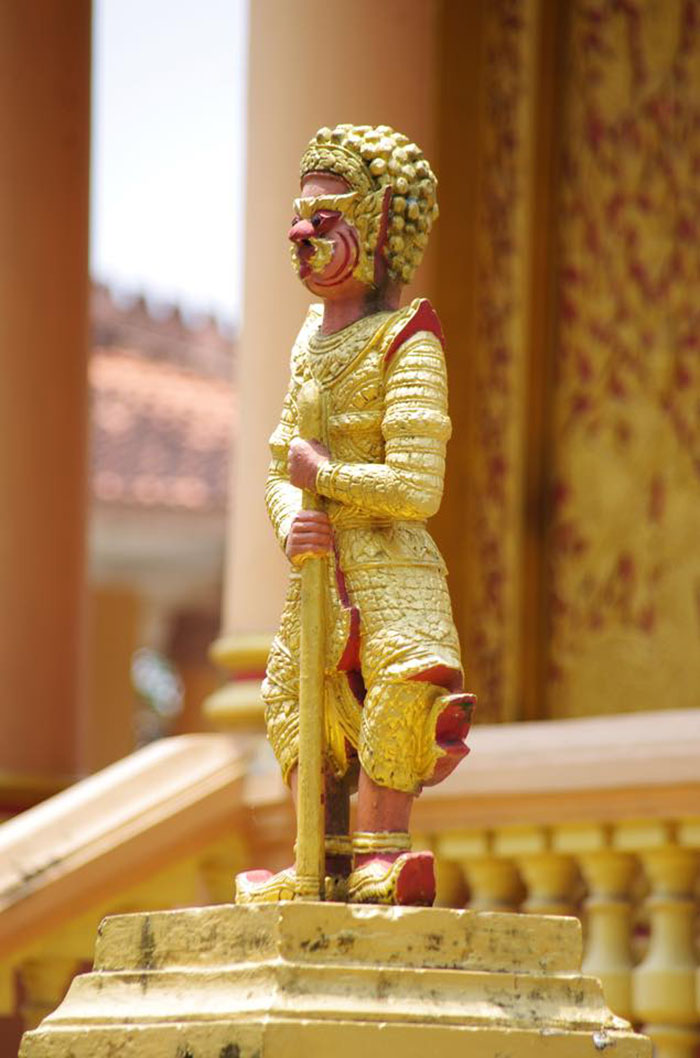 The deeper you go inside the main hall, the more visitors can feel the sophisticated decorative details, images, and patterns. Areas of low walls are erected along the corridor to form lotus petals or cubes, with a border 1.5 m from the main hall wall. Near these low walls, the planting monks planted many typical local trees such as jaggery, porcelain flower, … 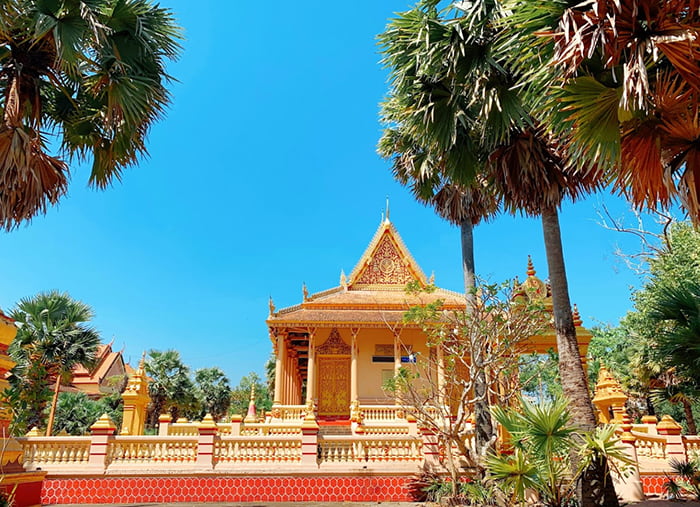 At each end of the column in the corridor surrounding the main hall, there is also a statue of Krud with arms outstretched. In addition, the steps leading up to the top are also decorated with Teahu and Yeak statues.

In ancient Khmer stories, Yeak is the character representing Evil, but later converted by the Buddha, often has a fierce appearance, big mouth, slanted eyebrows, long fangs, eyes convex. He often wears a pointed hat, wears armor, and holds a long pestle in his hand. Yeak is often placed on either side of the steps in front of the main hall for the purpose of protecting the temple. 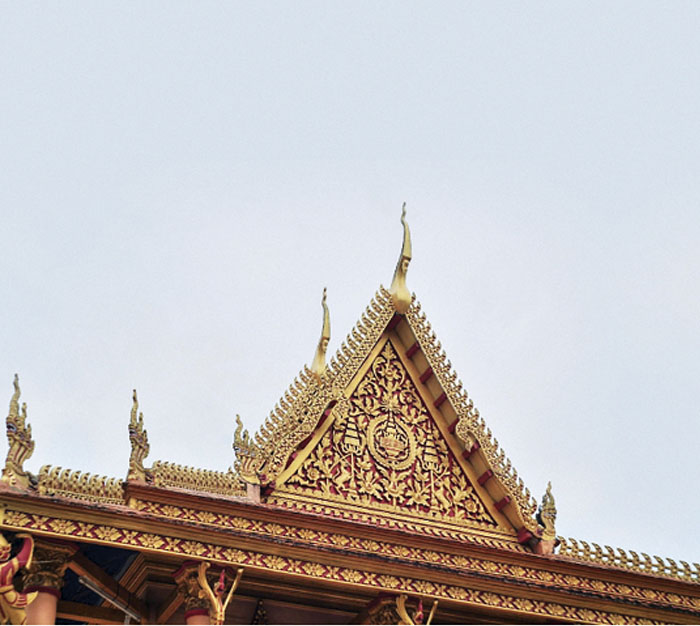 In addition to the main decorative details, the main hall of the temple is also oil painted with other vivid images such as birds, flowers, or fairies dancing in the vast sky. The temple grounds also have many glass cabinets that keep a number of ancient books, including a copy of the original bibliographic document about the place of Soc Trang as well as the event of the first temple building and related predecessors. directly to the temple. In addition, there are also many antiquities and more than 50 bronze Buddha statues. 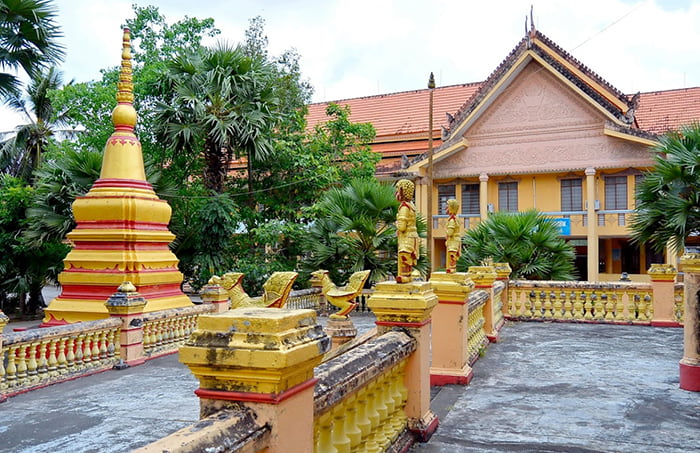 Temple architecture has cultural interference in the field of decoration and art between the three ethnic groups. Photo: thamhiemmekong

It can be said that Kh’Leang Pagoda has symmetrical and harmonious architectural lines, associated with unique works of art, thereby clearly showing the traditional artistic characteristics of the Khmer people in the past and present. Not only that, many decorative and construction details have demonstrated the artistic interference of 3 ethnic groups Kinh – Khmer – Hoa such as the hammock door and the Chinese on the pillars. This is really a work of high artistic and aesthetic value reflecting the cultural interference between the three ethnic groups in the process of long-term coexistence in the famous land with Nga Nam floating market and Tan Long stork garden. .

Not only a religious work with high historical architectural value, the pagoda is also a place to celebrate traditional folk festivals of the Khmer people such as Chol – Chnam – Thmay Tet, Dolta festival, Ooc festival – Om – Boc, where the Ngo boat race takes place,… 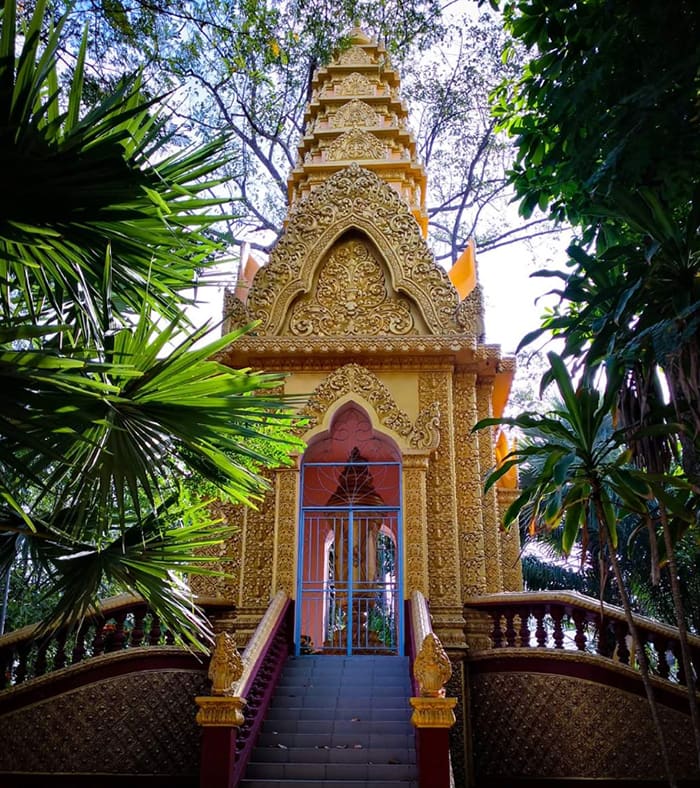 The pagoda is also a place to meet the traditional living needs of the Khmer ethnic people. Photo: thamhiemmekong

Kh’leang Pagoda was recognized by the Ministry of Culture and Information as a national architectural and artistic relic on April 27, 1990.

If you have the opportunity to travel to the West , check-in at Soc Trang, you definitely do not miss the opportunity to visit the nearly 500-year-old ancient temple called Kh’leang. Come to the pagoda to pray for peace, walk among the campus filled with green trees, enjoy the fresh air and remember to spend time learning about Khmer ancient books as well as listening to the legend of the origin of the name Soc Trang, Admire this beautiful and unique architecture!