The Temple of Uncle Prince Cai is a sacred temple and becomes an attractive destination for tourists every time they have the opportunity to visit Con Dao . So where is the address of Mieu Cau Temple and what is so attractive to tourists? Let’s find out in detail through the following article.

Where is the address of the Prince’s Temple?

The Temple of Uncle Prince Cai, also known as the Temple of Courage, the Temple of Prince Cai or the Prince of Hoi An, is located in Co Ong, Con Dao, Ba Ria – Vung Tau. Prince Cai is the son of Lord Nguyen Anh and his wife Phi Yen. This is a famous spiritual tourist destination in Con Dao, located in a quiet place with many trees around. The area in front of Mieu Cau has two Bach Ma with the meaning of watching for a good night’s sleep for him.

Hoang Tu Cai Temple has a rather small area, with a worshiping area of about 10m2. The area behind Mieu Cau is the grave. Prince Cai died when he was only 5 years old and is a very sacred place. Local people and tourists believe that when visiting the Temple of God, you will get whatever you want. Hoang Tu Cai Temple is located near Co Ong airport, suitable for visiting while waiting for the flight. 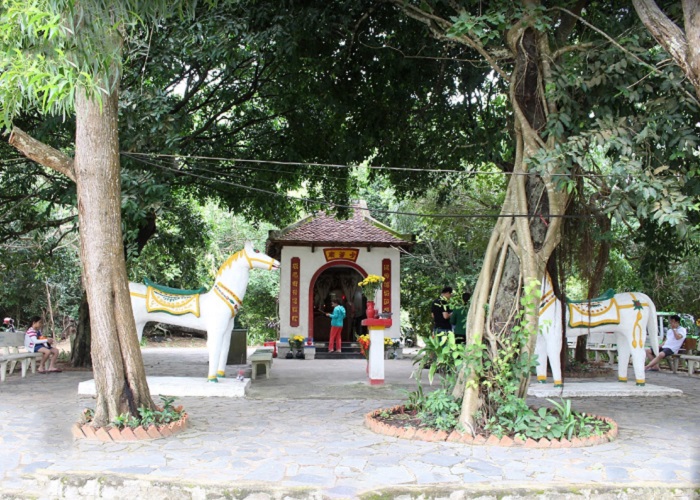 How to get to the Temple of Prince Cai?

To visit the Temple of Uncle Prince Cai , you first need to reach the town of Con Dao. Depending on the departure location, you can choose from many different means of transport to get to Con Dao such as: Take a plane departing from Hanoi, Can Tho, or Saigon to Co Ong airport (Con Dao). Or you can take a speedboat from Tran Deport (Soc Trang) or Vung Tau to Con Dao.

From Co Ong airport, you can walk about 800m to reach Con Dao Temple. If you depart from the center of Con Dao town, by private vehicle, you will follow the direction of Co Ong road about 12.5km. 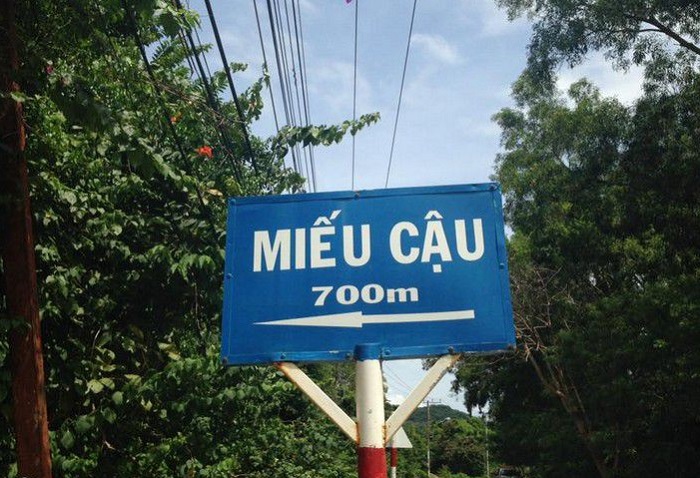 How to get to the Temple of Prince Cai?

Learn the legend of Mieu Cau in Con Dao

The Temple of Uncle Prince Cai is associated with the tradition in the fall of 1783 when the war with the Tay Son army was defeated. Lord Nguyen Anh and a group of about 100 families fled to Con Dao. Here, God established Co Ong, An Hai, and An Hoi villages. Lord Nguyen Anh wanted to send reinforcements from France to fight the pursuing Tay Son army. Therefore, he sent Prince Cai and an official named Ba Da Loc to France to seek help. Upon hearing this news, Ms. Phi Yen expressed her disapproval. 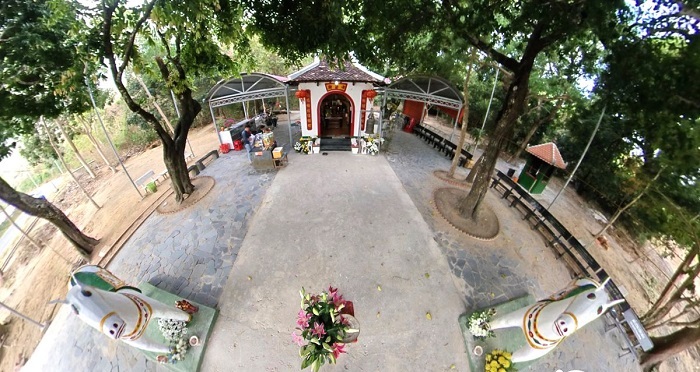 Panoramic view of the Temple of God from above

After the intervention of Mrs. Phi Yen, Lord Nguyen Anh was angry and suspected that she was an insider for the Tay Son army, so he had his army cut. When the courtier asked to stop her, she escaped death. Phi Yen is still imprisoned on a rock cave in the southwest of Con Lon island. After giving the order to imprison Ms. Phi Yen, the Tay Son army was about to pursue. Lord Nguyen Anh and the group got on the boat to run away. At that time, the 5-year-old prince of Hoi An refused to follow and wanted to go with his mother. Very angry, Nguyen Anh threw his son into the sea, then the prince’s body drifted back to Co Ong village. Co Ong villagers picked up the prince’s body and buried it in the middle of the forest near Dam Trau beach . After that, people built temples and burned incense to him. About Phi Yen, after being rescued and knowing her son had died, she was deeply saddened. 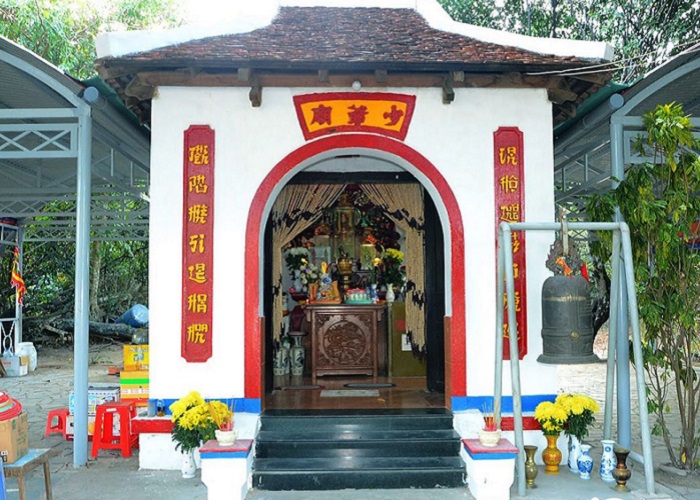 Con Dao people recount that the prince of Hoi An is a very filial son and always wishes good things to the people. Therefore, visiting the Temple of Uncle Prince Cai in Con Dao sincerely will have good health, have a lot of luck, and be always protected and protected by Uncle. When visiting the Uncle Temple, visitors can sincerely burn incense to remember the filial son and pray for the best. Besides, visitors also hear about the trick of going around two white horses in front of the Mieu Cau, men go 7 rounds and women go 9 rounds to treat bone and joint diseases. 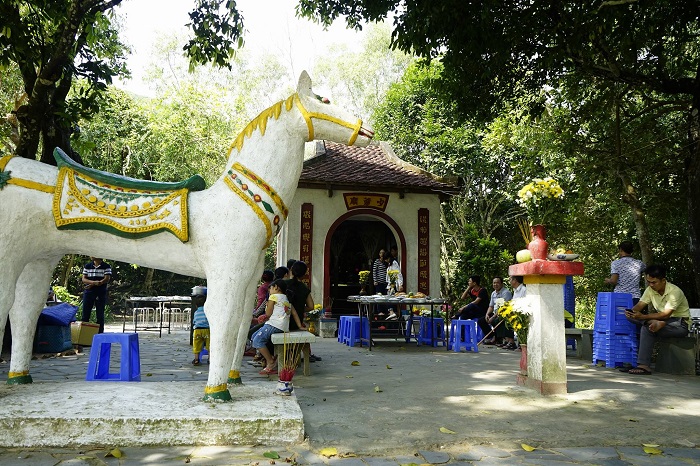 The Temple of Uncle Prince Cai is not only a famous spiritual place, but also possesses a beautiful natural landscape. The area around the temple is planted with many cool and fresh green trees. When you move further, you will reach the famous bay in Con Dao. The temple area is very dignified and there are people who take care of the beautiful incense and lamps. On the 22nd day of the 10th lunar month and the full moon days of January, July, and October every year, the Cau worshiping ceremony is held to attract a large number of visitors. 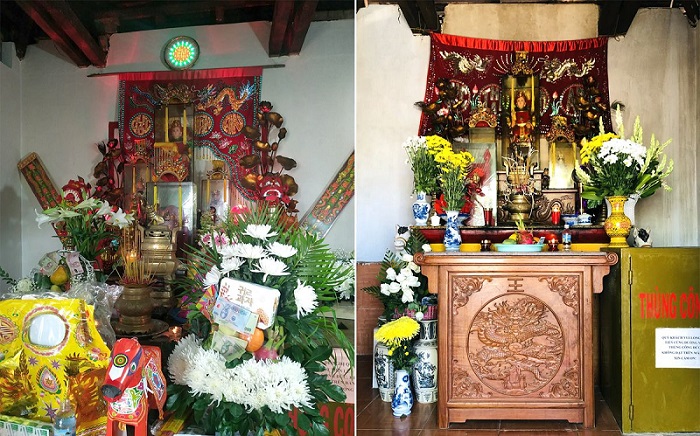 The area inside Cau Temple 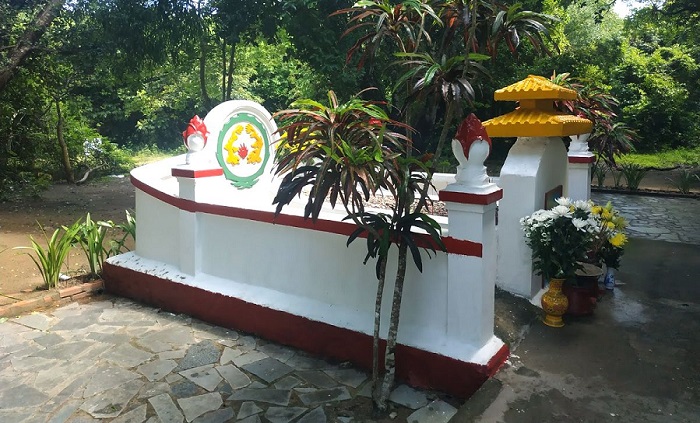 The tomb of Prince Cai is located in a spacious area

Notes when visiting the Temple of Prince Cai

Visiting the Temple of Prince Cai, you should also know a few notes below:

– The area behind the temple is the tomb of the prince, visitors can visit and burn incense to worship.

– The Temple of God is also a place to pray for children and to pray for the sacred baccalaureate.

– The road to the temple is paved with beautiful asphalt, with lights and no sidewalk.

– Maintain general hygiene when visiting and do not litter indiscriminately.

Hopefully, the above sharing will help you have the most complete tour when you visit the Temple of Uncle Hoang Tu Cai . In addition, you can refer to: Con Dao travel experience for the most useful information for the upcoming trip.