By visiting the Vung Tau museum, visitors will be able to witness firsthand the artifacts and better understand the development stages of the beautiful coastal city. So where is the Ba Ria – Vung Tau Provincial Museum? Let’s find out in detail through the following article!

Where is the Vung Tau museum located?

Vung Tau Museum is located at Bai Truoc beach area at 4 Tran Phu street, Ward 1, Vung Tau city . The museum is home to more than 28,000 documents and precious artifacts about the culture, history, and art of Ba Ria city. 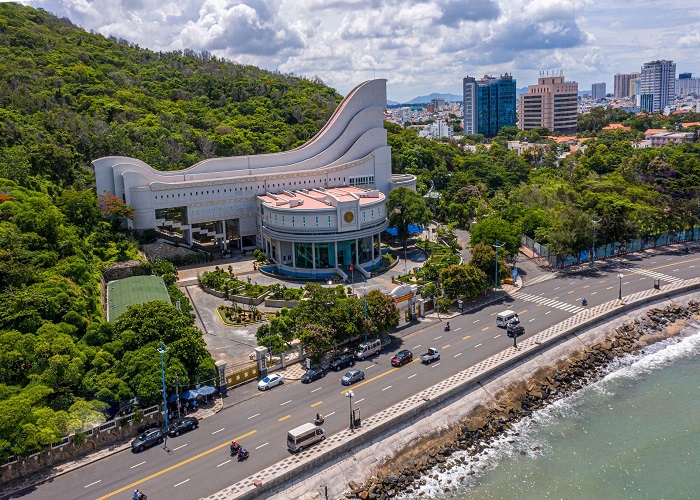 – Opening time: From 8am to 5pm (Tuesday to Sunday every week)

– Ticket price: Since its establishment, the museum is free to visit for visitors.

How to get to Vung Tau Museum?

The museum is located right in the city center, so visitors can easily move to visit the Vung Tau museum by many different means. Specifically below:

– From Saigon : The museum is about 100km from the center of Saigon, so visitors can take a bus or self-drive to Vung Tau. The nearest route is going in the direction of QL51 about 2h16p to arrive. If you take a bus, you can catch a bus from Mien Dong bus station to Vung Tau with a ticket price ranging from 100,000 VND/time.

– Departure from Hanoi : Visitors from Hanoi want to visit the museum, the best way is to take a plane to Tan Son Nhat airport (Saigon). Then, refer to the transportation method above or take a taxi to reach the museum.

– Starting from Vung Tau city center : Ba Ria Vung Tau Museum is about 11km from the city center, so visitors can easily ride a motorbike to the museum. According to Google Maps, the closest route visitors can take is via Thirty-April Street, about 21 minutes away. 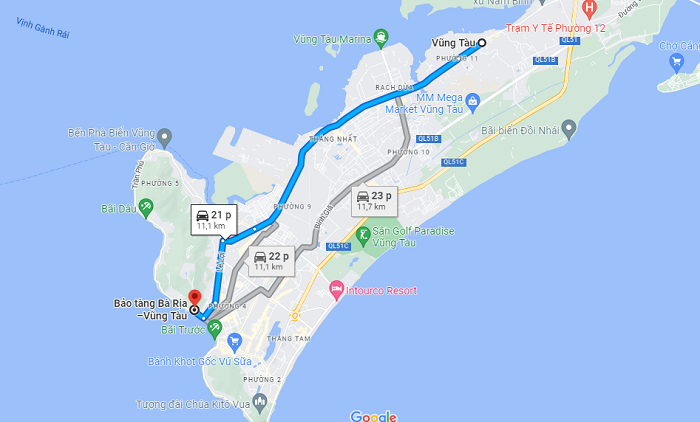 How to get to Vung Tau Museum?

What is there to visit Ba Ria – Vung Tau museum?

Vung Tau Museum was built on a large land of about 18,000m2 and featured modern architecture. The museum consists of all 7 floors, including 4 main floors and 3 lower floors. The entire construction cost of Ba Ria museum is about 98 billion VND, belonging to the state budget. The museum started construction in 2011 and officially came into operation in 2015. 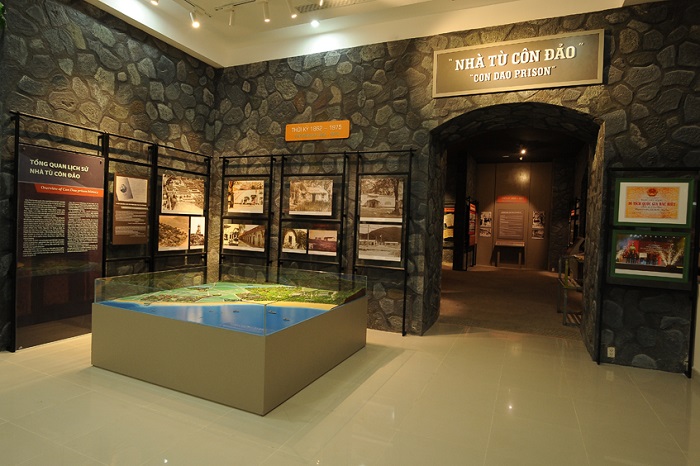 – Country and people of Vung Tau 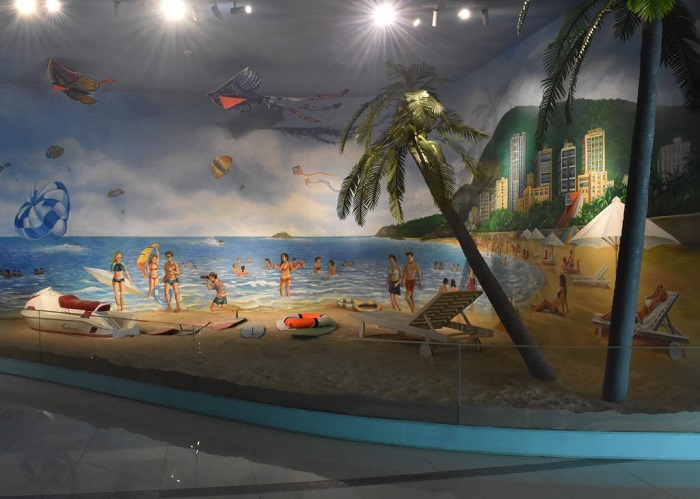 The first floor of the museum is a place to display artifacts about Vung Tau history from traditional to modern. This place recreates the scenes of life from the old days of traditional villages in Vung Tau such as mat weaving, bronze casting, forging, winemaking, salt making, and rice paper production. All themes in the museum are reproduced in artifacts, 3D paintings, models, or vivid perspectives. Therefore, visitors will better understand the culture, history, and people of Vung Tau through the periods. 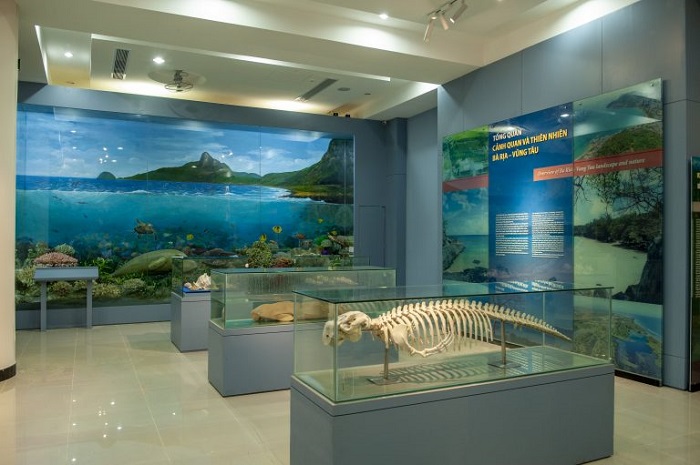 Exhibition area on the first floor of the museum

The modern exhibition space includes images of the development and innovation of the economy in Vung Tau, including: Oil and gas exploitation, fishing, traditional craft villages, harbors… 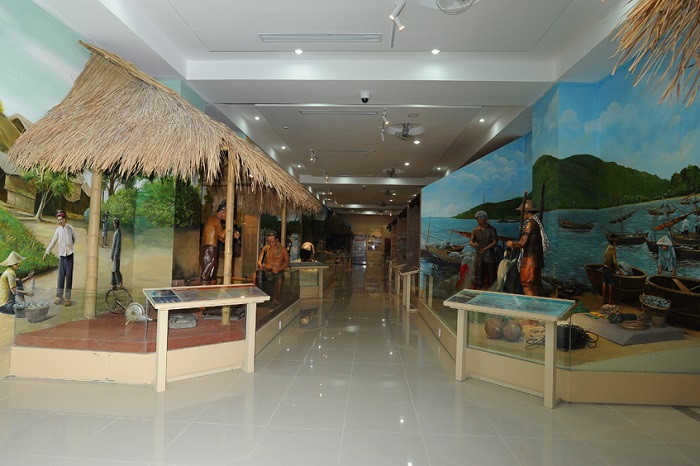 All artifacts at the museum are vividly recreated

Going to the 2nd-floor area of ​​the Vung Tau museum, visitors will learn about the battle of the Phuoc Thang fortress. In 1859, the Nguyen Dynasty’s army shelled the French and Spanish troops when they captured Hang Dua Bay. Currently, the cannons from the war are still on display at the museum.

Exhibition area on the 2nd floor of the museum

The 3rd floor is located at the top, which is a place to store antiques from the time of shipwrecks in the southern sea. The exhibition area includes 105 antiques to attract visitors. In addition, this area also displays a weapon set including 7 artifacts in the Long Dat district. The entire interior of the antique display area in the museum is impressive with a ship-like design. 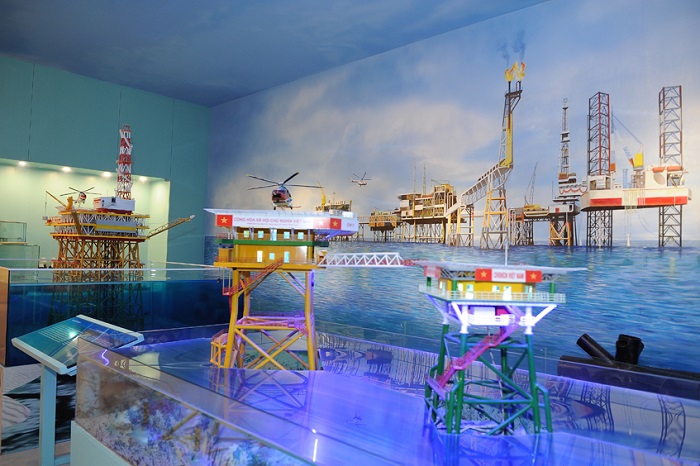 The 3rd floor of the museum displays natural and mineral resources

In addition to the historical reenactment, the resources of minerals, nature, oil, and gas, or tourism are also vividly described at the museum. These are archaeological relics, collections of antiquities, and artifacts about traditional craft villages through different periods.

If you have the opportunity to visit the coastal city, please visit the Vung Tau museum once to better understand the history, culture, and life of the people here. Besides, you can also refer to useful Vung Tau travel information for the perfect upcoming trip!