Visiting Truc Lam Zen Monasteries in Vietnam is an opportunity for visitors to admire the beautiful architectural Buddhist works of the Truc Lam Yen Tu school.

The most beautiful and famous Truc Lam Zen Monasteries in Vietnam 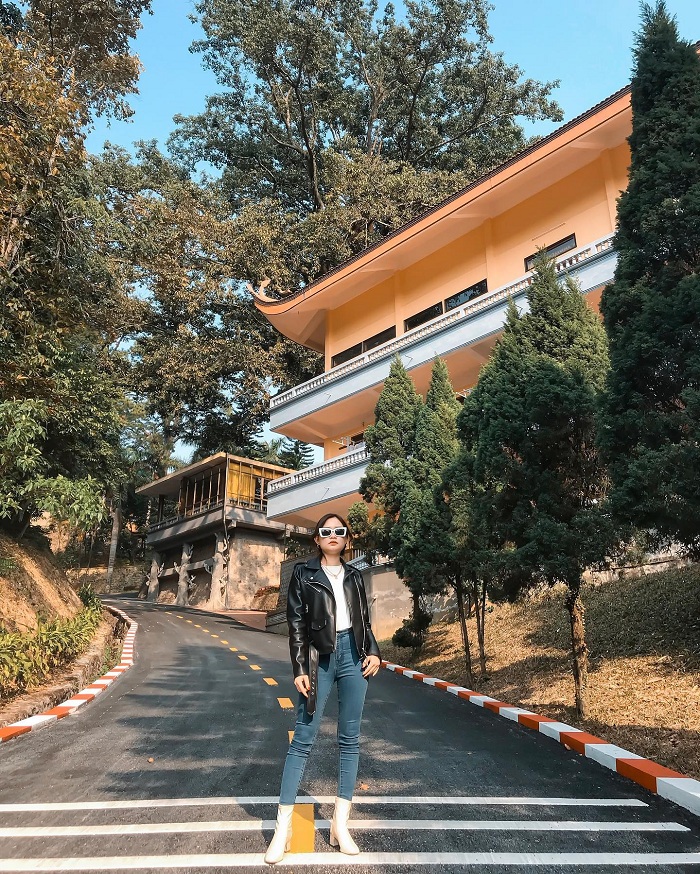 Truc Lam Yen Tu is a beautiful temple located on a hill in the shape of a unicorn, surrounded by majestic and magnificent mountains and forests. To get to the pagoda, visitors have to pass more than 6000 stone steps, go through bamboo forests, pine forests. In addition, you can choose to take the cable car to save time and effort. 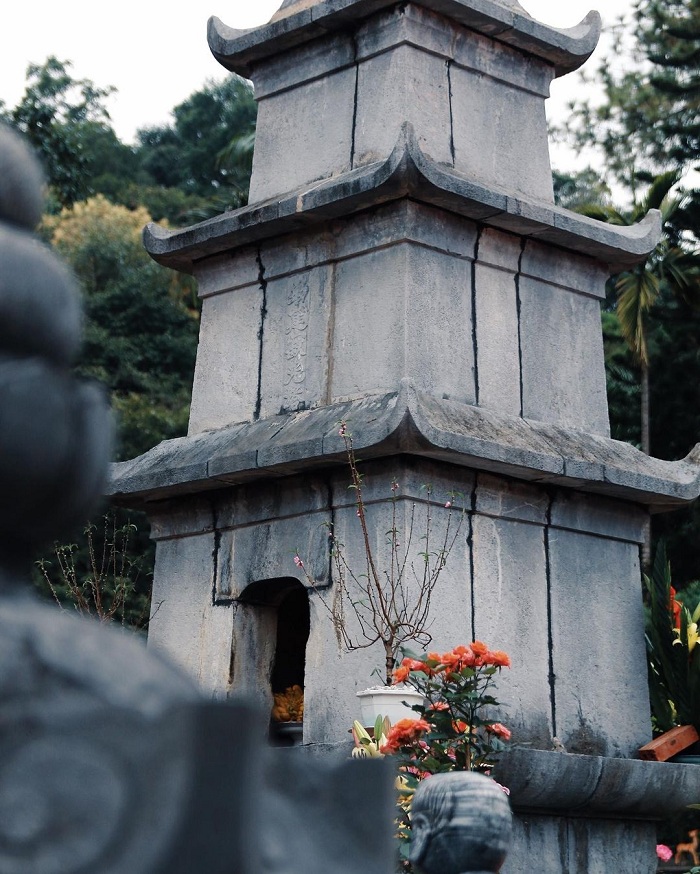 The temple has an ancient beauty. Photo: @thanhhnguyen.05

Truc Lam Yen Tu Zen Monastery was built with many important items such as the Main Palace, the Drum Pavilion, the Bell Tower, the Ancestral House, the Arhat Street, etc. The highlight of this temple is the 4-ton statue of Shakyamuni and the statue. Bodhidharma weighs up to 3.2 tons. Therefore, when visiting the temple, visitors will feel more clearly the sacredness and majesty of this place. 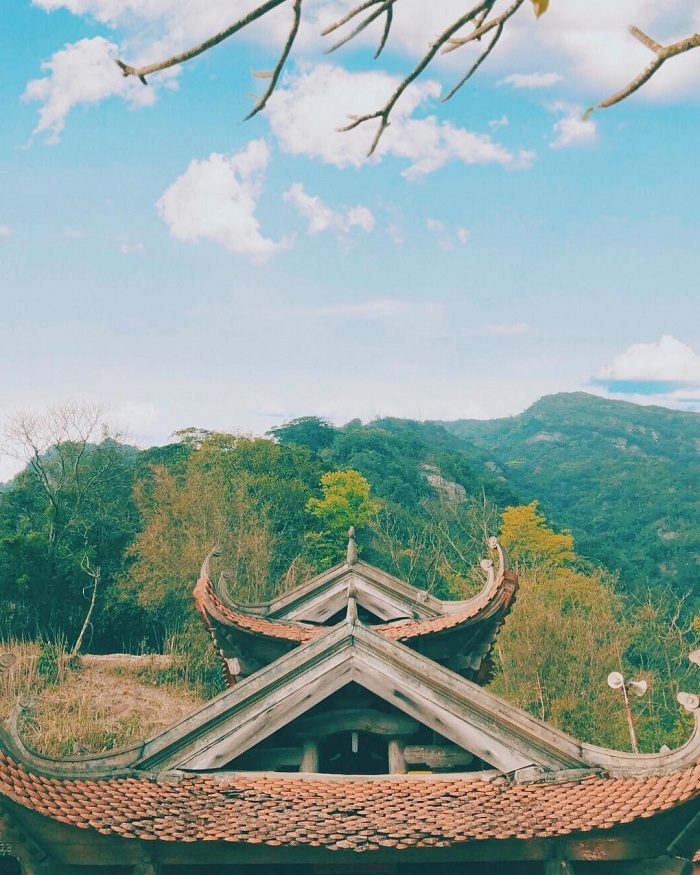 Not only is a beautiful temple in Vietnam with a long history, but Truc Lam Yen Tu is also loved by tourists because of its top-notch architecture. The system of trusses in the temple is made of precious linden wood, the campus in the temple is decorated with splendid golden lacquer, the roof of the pagoda is covered with curved tiles, which make this place more majestic. 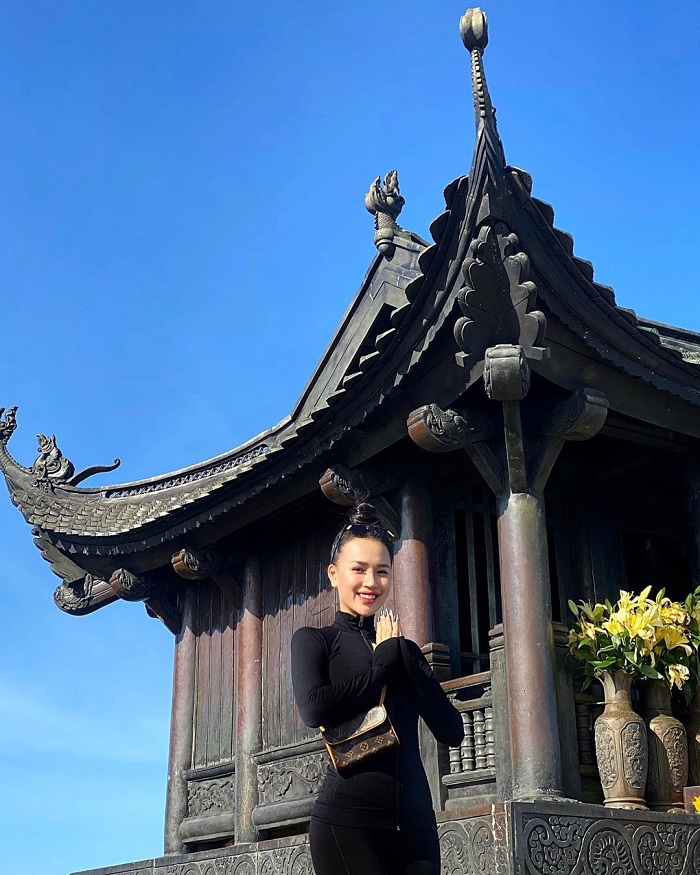 Today, Truc Lam Yen Tu is an important destination in the Yen Tu landscape complex, attracting a large number of tourists who regularly visit. The most appropriate time to visit the temple is early spring because there are many festivals taking place, the weather is beautiful and calm. Visitors can also combine to explore other temples such as Yen Hoa pagoda, Dong pagoda , etc.

Among Truc Lam Zen Monasteries in Vietnam , Truc Lam Tay Thien is also the most famous temple in the North. This beautiful pagoda is located in Dai Binh commune, Tam Bao district, Vinh Phuc province. About 85 km from Hanoi capital, visitors can combine going to Tam Dao and visiting this temple. 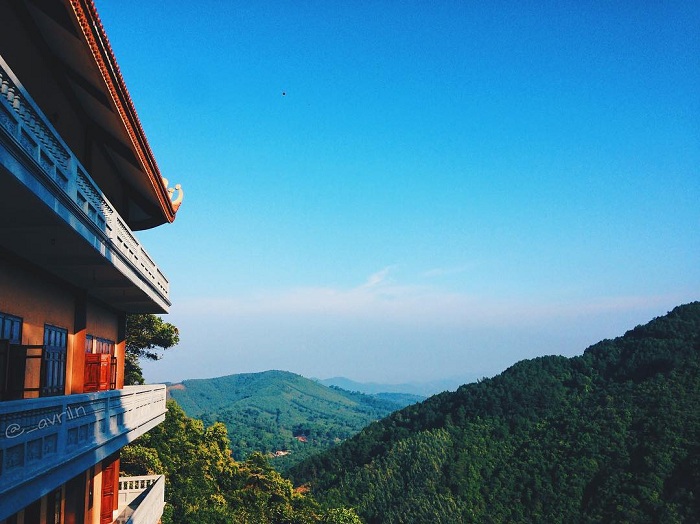 Tay Thien Zen Monastery was built in April 2004 and completed in November 2005 with a budget of 30 billion VND. Thanks to the contribution of people, craftsmen and craft villages, the temple was built in a quick time with an economical cost. Although it is not an ancient temple or has a long history, Truc Lam Tay Thien is always a beautiful destination in Vinh Phuc . 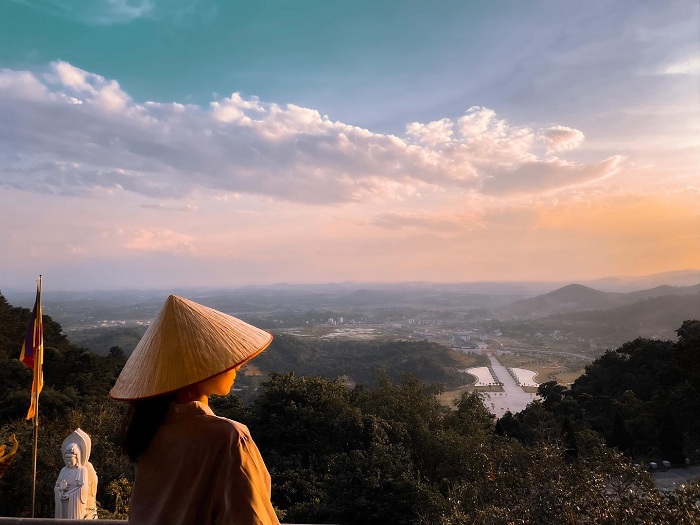 The temple has a very nice view. Photo: @anhhttho

This famous temple possesses the architecture of a contemporary Vietnamese pagoda, a perfect combination of sculptural details, outstanding motifs and impressive three-way gate. In particular, the location of Tay Thien pagoda is located in the middle of a natural picture with forests and majestic mountains. Anywhere in the temple, you can fully enjoy the beautiful scenery of Vinh Phuc. 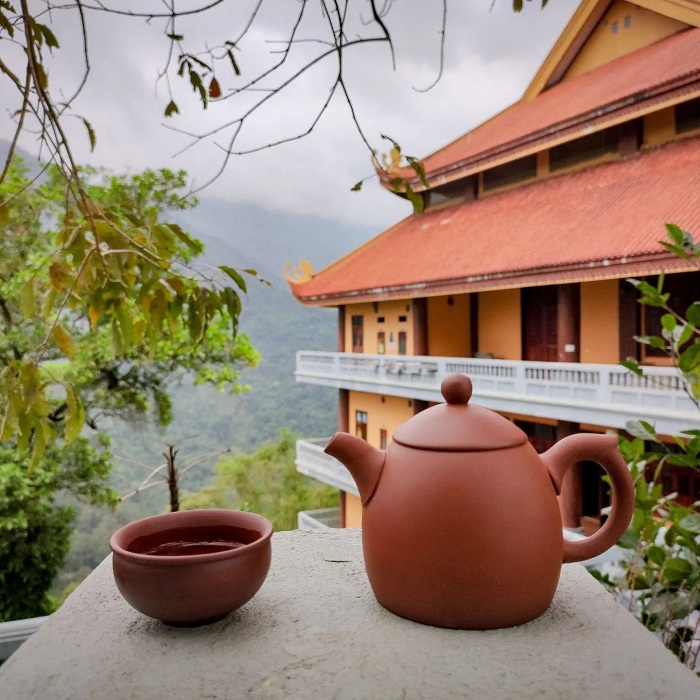 The complex of works of Truc Lam Tay Thien pagoda includes the main items of monks and nuns. In addition, the temple also has a nunnery, a meditation hall for students to practice, and a meditation room for nuns to practice. In particular, coming here, visitors can also visit the great Mandala stupa – the first stupa of the Vajrayana monastery in Vietnam.

Truc Lam Zen Monastery in Dalat is also one of the Truc Lam Zen Monasteries in Vietnam, beautiful and famous, a symbol of the city of thousands of flowers. Truc Lam Pagoda Da Lat has a 192 m2 main hall, located next to the poetic Tuyen Lam lake with a direct view of the green pine hill and the romantic lake. 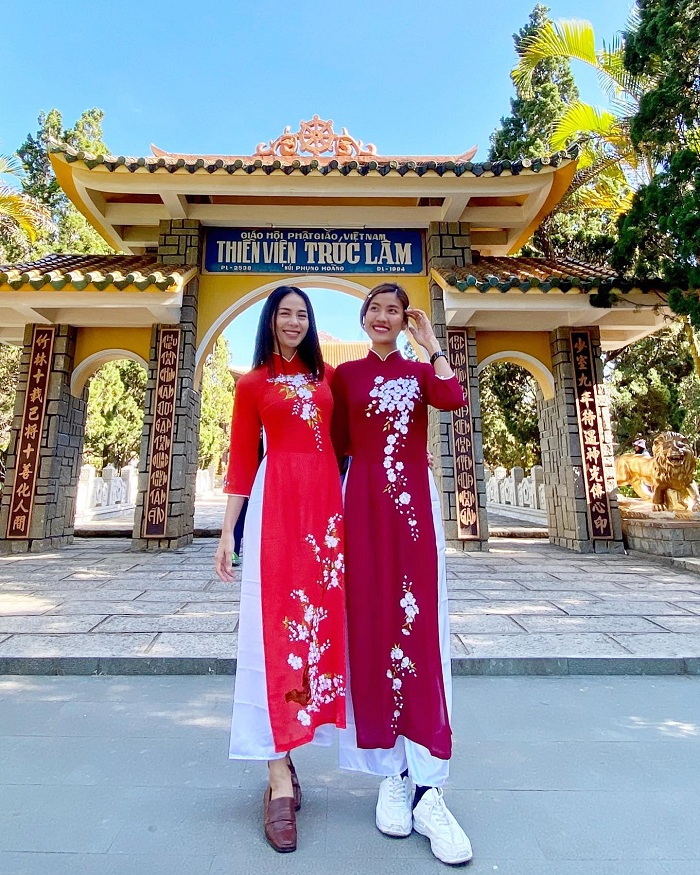 Truc Lam Zen Monastery in Dalat is the symbol of the city of thousands of flowers. Photo: @rodmayaloha

Truc Lam Zen Monastery in Dalat attracts visitors by the beauty of its majesty, spacious and cool space and beautiful flower gardens planted everywhere inside the monastery. Amidst the cool air of Da Lat, the temple appears with a peaceful and peaceful beauty, giving visitors elegance and comfort when coming here. 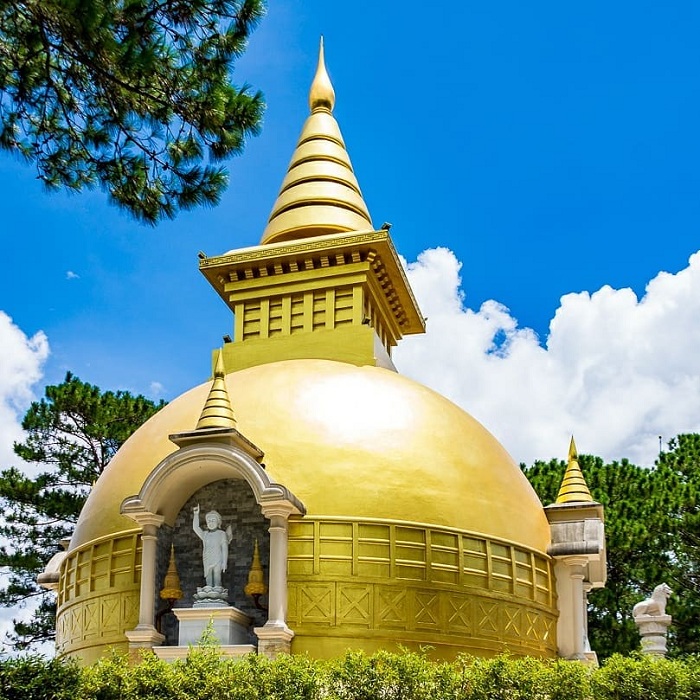 The temple is surrounded by green pine hills. Photo: @photographybynev

The highlight of Truc Lam Dalat is the 2-meter-tall statue of Shakyamuni Buddha, holding a lotus flower branch in his right hand in the middle of the shrine. Right next to it is a statue of Bodhisattva Manjushri riding a lion, on the left is Bodhisattva Universal Worth riding a white elephant with six tusks. In addition, in the pagoda, there is also a bell tower with a large persimmon weighing up to 1.1 tons. 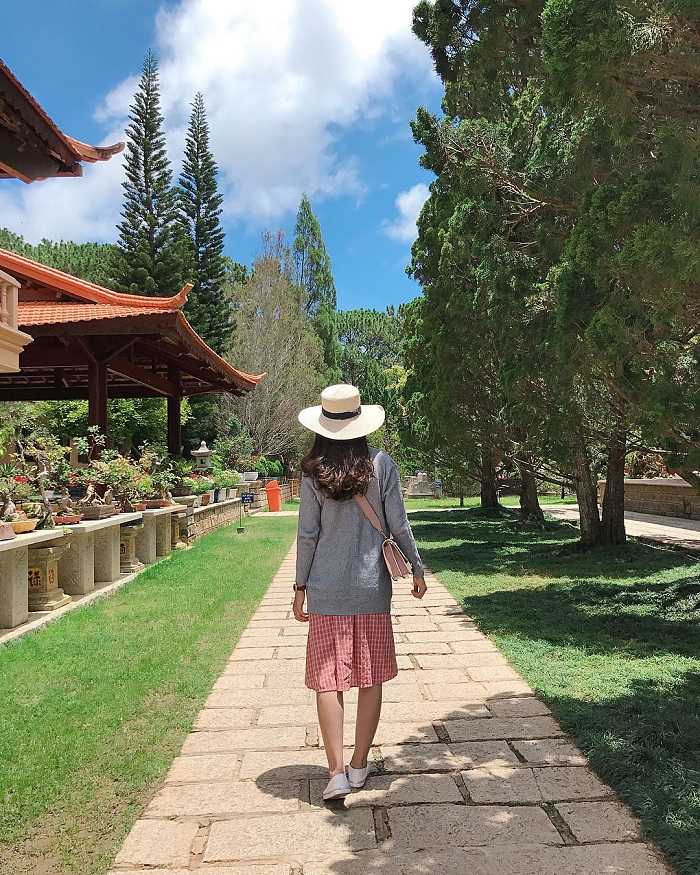 As a spiritual work of the Truc Lam Yen Tu school , the architecture and beauty of Truc Lam Da Lat are somewhat similar to Truc Lam Tay Thien and Yen Tu Quang Ninh. The beauty of the pagoda is not only reflected in the architecture, colors or Buddha statues, but also thanks to the feng shui terrain. The temple is surrounded by pine forests and flower gardens, so there are many beautiful check-in corners for visitors to take photos. 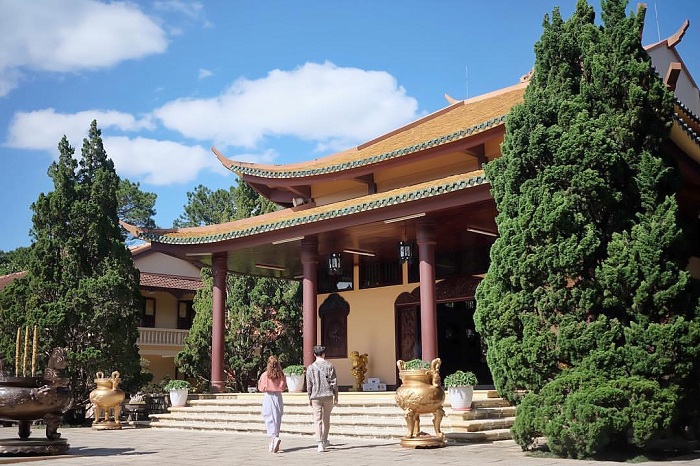 Today, the road to Truc Lam Pagoda in Dalat is very convenient and easy to go. Visitors can directly go to the temple by car or motorbike. In addition, you can also experience taking a cable car to see the poetic picture of Da Lat from above. Because the temple is located next to Tuyen Lam lake, visitors can combine exploring these two destinations in the same session.

Referring to Truc Lam Zen Monasteries in Vietnam but forgetting Truc Lam Chanh Giac is a huge omission. This temple is located in hamlet 1, Thanh Tan commune, Tan Phuoc district, Tien Giang province, built in 2012 according to the tradition of the Truc Lam Yen Tu sect. The temple is both a center of cultivation and a famous tourist destination in Tien Giang . 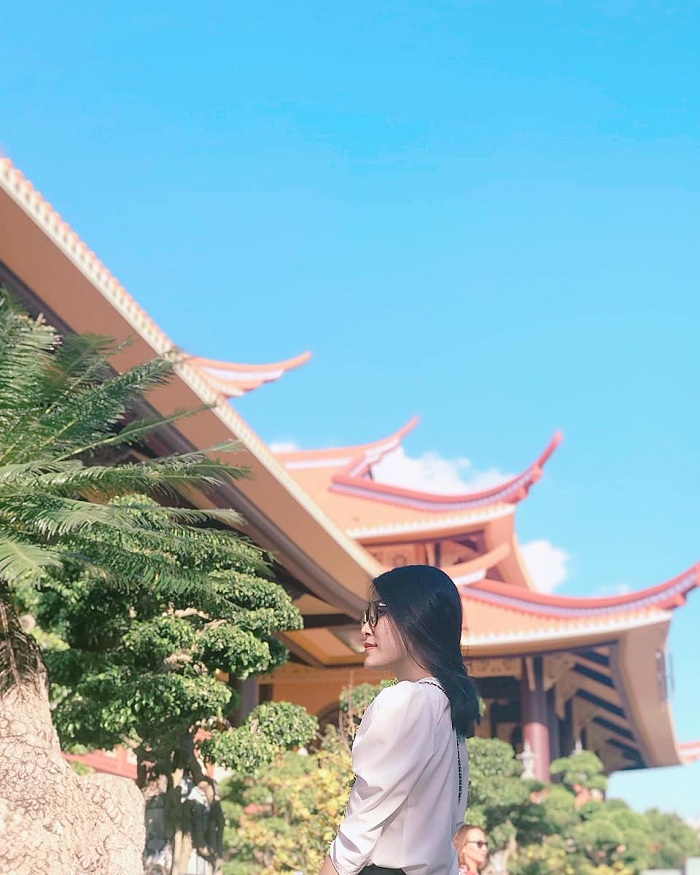 Chanh Giac Zen Monastery was built on a total area of ​​50 hectares, owning a large campus with many giant boulders, many green giant trees. The temple consists of two separate areas, the internal and external hospitals. The external hospital area includes many items, more than 47,000 m2. Particularly, the main hall has a capacity of more than 3,000 people. 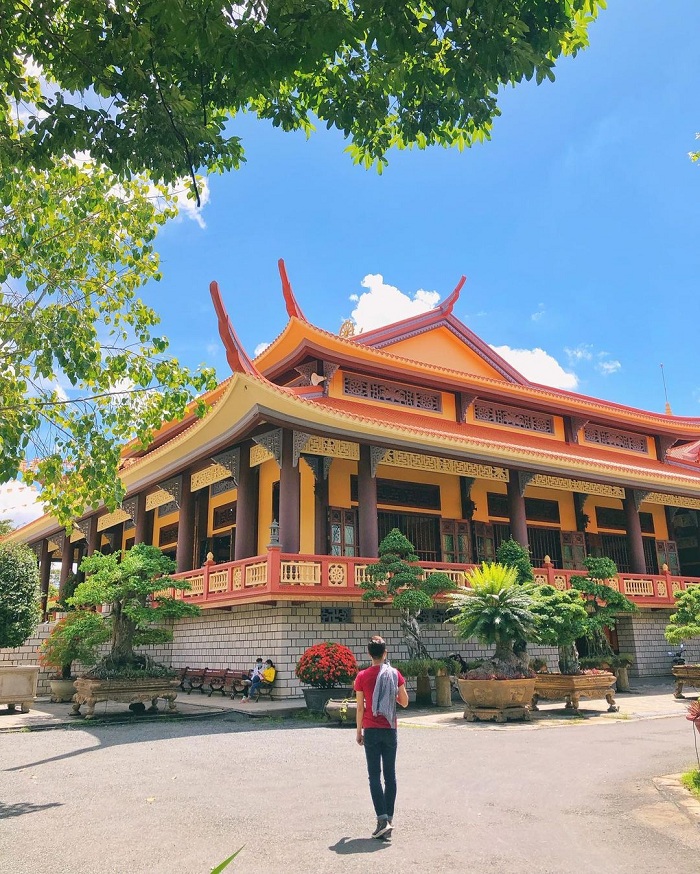 Truc Lam Chanh Giac Zen Monastery brings the beauty of the intersection between ancient and modern architecture, reflected in the layout of the items in the temple, the Buddha statues and paint colors, the impressive system of tile roofs and columns. Coming to the temple, visitors will immediately feel the peace and serenity from their hearts. 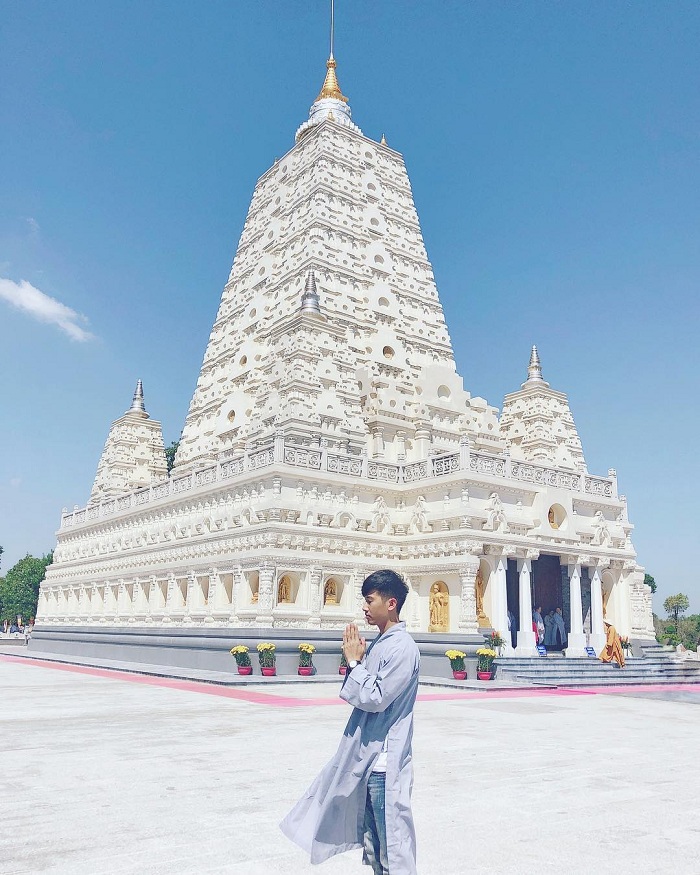 The project is called “Little India in the heart of Tien Giang”. Photo: @tyarinst

The highlight of this beautiful temple is the 31-meter-high stupa with pure white color, carved with many beautiful patterns and textures. This stupa is called “Little India in the heart of Tien Giang” by young people because of its unique beauty, which is different from other stupas of Vietnamese pagodas.

Truc Lam Zen Monasteries in Vietnam are all beautiful temples of large scale, superficial architecture, and unique and impressive beauty typical of the Truc Lam Yen Tu school. Throughout the three regions of the country, there are beautiful and majestic temples of the Truc Lam school for tourists to admire and visit.